With Wayhaven being so popular, I thought it would be nice to have a specific topic where we can share all of the fan creations we make :D. Everything is welcome here, doesn’t matter if its fanart, fanfic, or anything that comes to your mind.

I will start the topic with the Unit Bravo I created using the character creator of Black Desert.

I plan on doing the rest of the ladies, and then probably do my MC’s as well. What about your UB, what do they look like?

Attention, from now on, all the art published in this thread will be also compiled in here.

Update: From now on, this post is open for everyone to edit and add their own links. So please, feel free to add your links here, just mind to put everything in the right category and put a small description of your contribution and your name so as to not cause confusion. Thank you!

To make everything easier, I’m going to start collecting in this first post all the fanart/fanfics that are published in here, so they are not lost between t̶h̶o̶u̶s̶a̶n̶d̶s̶ hundreds of posts in the future

I will do this by putting links to the posts

If you want me to add anything here, feel free to simply post in this thread, or you can also PM me if you want your art to stay anonymous for any reason I could never understand.

this was my attempt at making the male UB in the sims 4! i had literally no idea what kind of hat to give felix but we can just ignore it lol.

I think is quite accurate, tbh! Well done

thank you very much! 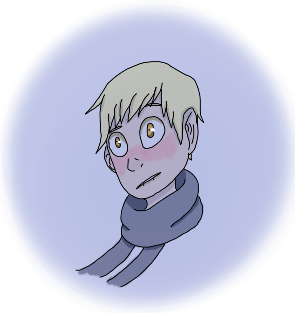 She’s both confused and intrigued by Ava’s sudden strange behavior.
Halfway tempted to try and draw Unit Bravo, but I dunno if I’d be able to accurately turn the written descriptions into drawings.

Im not sure if its only me, but I can’t seem to see the drawing :(. By any chance, have you upload it with imgur? Because imgur hates my ip address and I can’t see anything from them

This is a good and important topic and I will need to contribute at some point.

It does! I like her lip biting, it makes her look very cute haha. Also, nice haircut!

I like to play it up til that point as mostly friendly. So she’d be rather caught off guard by Ava’s sudden scarf attack while on patrol.

Thanks! I have a better picture of her in my head, but my hands don’t want to make it happen.

Oh boy. So I play the same detective but with some personality shifts for RO so this version of my detective, Kira is pretty sarcastic and salty, but she means well.

She would totally poke fun at such a serious situation because that is how she COPES.

It popped into my head as I was playing.

That art makes me feel the detective is being so sarcastic and genuine at the same time for some reason.

Totally nailed my normal facial expression. Have we met?

Lol @SleepyArtist, specially after is your MC who saves the day and gets Murphy. Also, your art is pretty cool, love the hello kitty shirt lel.

And @Kanaya, I think if the drawing is not yours, you have to put a link to the author, otherwise is against the rules of not posting stuff is not yours (I think).

I lost the tumblr for the artist but I shall go on a quest to reget it.

I just have to say- your Morgan though.

Oh! @Dagger1819 I fixed my problem with imgur, for future art you want to show us I mean

Sweet. Going to be practicing my artistical skills for a while, but I will very likely do more.

@Outrageous
Kira: says really nice stuff that she means but in a really sarcastic tone lmao.

@Meira_Litch EXACTLY. She kicked butt with her nerd science brain . (Is it kinda sad that I was waiting for someone to mention the hello kitty shirt? Ahah.)

So Imma post my headcannons/fragmented ideas for my detectives here if that’s cool. Yes? okay.

Emma Langford (Seriously not going to stop talking about this lady) She’s not a good fighter (finished her first go with a 0 in combat if I remember right) but she’s a great investigator (80). She’s also a workaholic coffee addict. I imagine her to have been burned really bad back in highschool by a girlfriend, which has caused her to be nervous in regards to romance since. She’s a good cook and knows how to play guitar. (“It was highschool, everyone was in a band.”) She’s an alright singer, though there’s no way in hell she’d sing if anyone was nearby. I can 100% picture her playing/singing what is love by Haddaway to herself after a confusing/frustrating moment with Ava. I also imagine her getting scratched/bruised up a lot, even before everything that’s happened.

Don’t actually have one sorted out for Morgan yet. I guess I need to do her route again.