Lux: City of Secrets - Book 3 of The Evertree Saga by Thom Baylay

LUX titlescreen 022800×1125 1.01 MB
“You think that I’m lying to you?” The priestess leans forward and kisses your forehead. “I would do this for you, even if you believed in nothing but the gold in your pocket.”

A warmth spreads through you from her blessing. For the first time in days, you feel as though you have found someone you could trust. But this thought is quickly extinguished by the memory of another’s warning.

They all have secrets. They are all liars.

Welcome to Book 3 of The Evertree Saga, continuing the story that began with Evertree Inn and Sordwin. In this fantasy adventure, you return once again as an investigator of magical mysteries, this time exploring the many twisting tales of a city full of secrets. Can you balance the commitments of your new life in the big city and rise above, or will you become just another nameless face in the crowd?

What you can expect:

Watch this space for further announcements. In the meantime, please do check out the other titles in the series here and here.

Credit: Thanks again to the amazing @selpuku for the artwork.

February 28th is a thursday

Oh! Well noticed! In that case I have updated it. The deadline is Friday the 1st March.

Hey everyone!! Just a reminder that the competition deadline is next Friday!

Thank you to everyone who has submitted stuff so far! You’re all so creative! I’m so excited to go over them all properly next weekend.

Good luck to everyone for these last 7 days.

I thought it said book 3 completion instead of competition and thought “Was the 2nd book skipped or something?” lol

Haha! Yeah, alas I don’t work that quickly! Book 3 will take a while

One last week everyone! Get those entries in by Friday and win a chance to design a character in the Book 3! I can’t wait to see what people come up with

Can you give a specific time and timezone (since i live somewhere in Asia)? Like 18:00 PST time.

@ThomB can we submit multiple entries?

I’m not going to be too strict if an entry comes in a little late. I’ll post a ‘This competition is closed’ first thing when I wake up on Saturday morning (GMT).

@Mari_Gold You are most welcome to submit multiple entries and I’m happy to consider them as one big combined entry or as multiple smaller entries.
However I’m ruling that each contestant can only win the main prize once. So there will definitely be 5 different winners. Regarding the other prize of a question about the series, contestants will get one question per entry up to a maximum of three.
So if you think multiple entries will boost your chances then go for it! The more the merrier

If you’d rather put all your eggs in one really polished basket, that’s great too!

I hope that answers everyone’s questions! Good luck and feel free to ask if you have any more!

Three days to go! Get those finishing touches to your entries and send them in either as a message to me on this forum, or to evertreeinn [at] gmail

24 hours to go!!! I’ll formally close the competition around this time tomorrow.

Hello!!
The deadline for this competition has now closed but if you missed it, please don’t despair! Send over your fan works if you have them!

It makes me very happy seeing other people’s creativity so while a late entry won’t be eligible to win the main prize, you will still get an email back from me and the chance to ask a question about the series/my writing.

Best of luck to all the contestants. I’ll announce the results next week.

Thank you again to everyone!!

i can’t wait to see the winning entries! i also hope we can see the others as well.

COMPETITION RESULTS
Congratulations to the five winning entries for the competition!
(Listed in no particular order!)
@Jender - For your awesome mixtapes for Dandy and Orion! I’ll definitely be listening to those as I write Book 3. Such a fun idea!
@pimenita - For the intriguing short story about Evertree halfling Tobin’s adventures in the mysterious North.
@ryan_khong - For the moving short story about the sibling left behind in Blackstone and the mysteries surrounding the family fire.
@selpuku - For the ridiculously cute and really fun depiction of the dining room at Evertree Inn. All the small details really bring the room to life.
@Unregistered - For the highly meta and very clever ChoiceScript mini-adventure, Nameless. I’m sure I still haven’t completed every path!

There were lots of really strong entries and it was definitely a real challenge to choose the winners so thank you to everyone for entering and keep an eye on this thread and on my Twitter where I’ll be posting the entries over the next few days.

In the meantime, make sure you check out Sordwin! It’s finally here!

Congrats to everyone, and to you Thom

I’ll be waiting for that steam release

Check out these awesome playlists from competition winner @Jender. This was such a fun and original idea for an entry and particularly resonated with me as I always compile a playlist of music before I start writing a new scene or character!

And next winning entry, a short story by @pimenita which gives us a snapshot into the adventures of Tobin Brushgather, the halfling from Evertree Inn.

@pimenita also has a WIP which you can read here. I definitely encourage people to check it out

@ryan_khong explores the life of the sibling left behind and delves into a possible cause behind the fire that started it all. Perhaps we’ll see more of this particular story thread in future volumes of the Evertree Saga

Winner number 4! This fantastic scene of the Evertree Dining Room in Chapter 3

Thanks @selpuku, I love it! 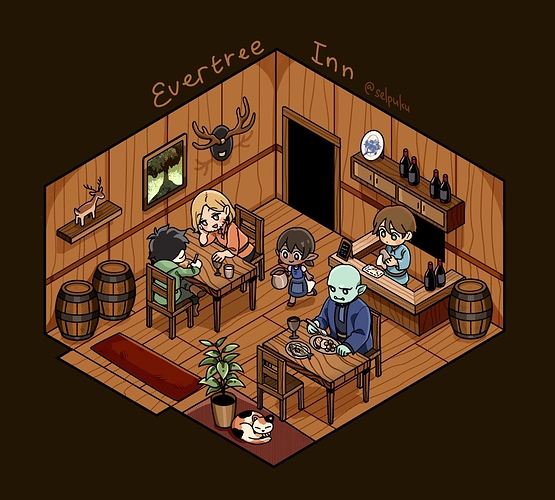 Trying to recognise everyone on the pic:
Wen and Gunther are obvious, and I assume the guy with the green clothes must be @selpuku’s MC. But the blonde guy sitting with MC and the one at the counter leave me a bit confused. The pointy ear and my memories of that scene suggest that the former must be Dandy, but isn’t he described to have black hair and blue eyes? Guess that leaves us with Lamuel as to who the guy at the counter could be, he is also drawn differently than how he is described in the game. (Sorry, I tend to get nitpicky when it comes to such details.)

Otherwise I like it. The drawing style is really cute.