IDEA’S BEEN CLOSED OFF

This is the first time I have penned my stories and am very nervous about this. I would like any advice about my writing skills and grammar. Also have written it in English that is native to my country so take it easy.

It is a romance heavy game and I would not recommend it to people who are not into the romance genre.
It is heavily influenced by Attack on Titan, Pacific Rim and a little bit of Jurassic Park.

You can play as a Male, Female or Non Binary. There are 7 ROs and all can be male or female according to your orientation and you can also mix them up. In the mixed option the 7th RO is always going to be Non Binary.

I would love it if you guys could point out anything that feels missing or needs to be added. Is the grammar, pronouns and readability okay…and just anything do let me know.

I repeat again, any advice you can give will be appreciated a lot.

Sometimes the game addresses Alice as “him” or “handsome”

I think you need to update your first page with the new demo, instead of creating a completely new page.

Yeah, I kinda accidentally may have posted the bloody thing a second time, while updating it

THIS IS SO GOOOD! I had so much fun playing it and it was a great birthday gift.

This update was literally so good. Just a bit confused about the characters like Alina, Allin and Dorian otherwise it is pretty great. Keep up the good work.

@Varyn_Ashyver_closed dude that bomb drop at the end! PERFECT! Loved it! 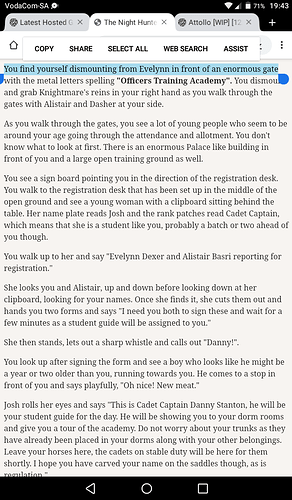 Oh and first sentence where the MC’s name is, shouldn’t your horse’s name be there?

In love with the WIP

One of the best demos I’ve tried.

The story is engaging and intriguing, as well as the characters.

Holy crap, before even entering chapter 1 I was already smiling like crazy. As a fan of attack on titan I can already tell this is one of my faves.

@Varyn_Ashyver_closed Since it would be confusing for there to be two WIP threads for the same game, do you want me to merge the old replies into this thread and close the first thread, or close this one and merge the replies to the first thread?

Yessss…God bless you, I am not at all tech savvy so yes please

Nope it works this way as well, like I said I use a form of British English in my country

I set my ROs to All female and it’s taking infinite time to load.

Hi! Unfortunately, the demo isn’t working, there’s immediately an error when you try to choose the ROs genders!
And so, to at least see a little what your story is really about, I looked at the code of the first chapter and you can actually make your life way easier by using *fake_choice for hair, eyes, etc! You won’t have to use *goto and *label

Hi! I choose all of the RO’s as male but it took forever to load. Hope you fix it ^ω^