Seems like Siberian Huskies will probably win the poll!

I’m a little surprised but then again, who can resist those fluffy vocal puppers? and they’re so expressive!

Bert is a very special boy so the husky breed and their weird little quirks will mix well I think c:

Should be Daughter of Heracles actually, Hercules was the Roman version, son of Jupiter. It bothers me to no end that these are always conflated.

This was actually brought up already by,

Any reason in particular you’re choosing to call him Hercules instead of Herakles/Heracles? Hercules is his Roman name

@will is pretty much right eheh

I did debate on it for a while though but I figured most people know him as Hercules. There are so many different names for so many of the characters, sticking with the most known seemed like the best plan.

But I may change later on if it really does bother a lot of people c:

I went down the Greek mythology rabbit hole after googling hercules kids.

And this is why we read things first

I really like this! Cant wait for the next part

This is a gentle reminder to please reply to posts topically. Do not reply at others personally. Personal comments lead to friction and flaming.

But I may change later on if it really does bother a lot of people c:

Can I suggest if you call him Heracles and it ends up on the stores, you’ll have a whole lot of people complaining you’ve got the spelling of the name wrong

(And that’s coming from someone is does kind of bother. I always find it kind of worrying that he was named after Hera in an attempt to convince her not to torture the guy throughout his life (or death), but at least it puts everything in context. Change the name and you lose that, but that’s popular culture for you

Their names are Cera, Bert, and Russ!

I’ve always kind of imagined Cerberus would be some kind of mix with a lot of mastif and possibly wolf in there- big, strong and fast, (or a bit demon-like: something like this perhaps… 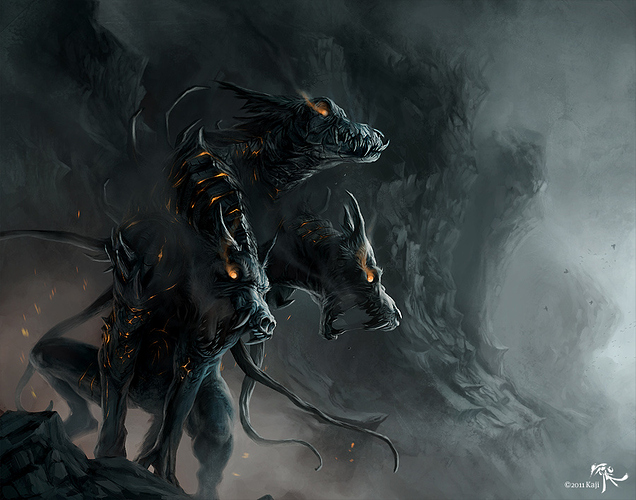 but I don’t think any of those are going to fit with those names lol.

Or just implement a toggle for it. Best of both world’s, although it is a bit more work. Set default to Hercules and give those of us overly bothered by that the option of using proper naming conventions for the Greek heroes.

Shrugs- I don’t know that’s it’s really a huge deal is it? He’s not the main character and everyone knows who he is as Hercules.

yeah, I’m kinda stuck between a rock and a hard place

I would change the title completely, I just have no idea to what. I thought about Daughter of Hades instead, but a big part of the story is about how much the mc dislikes being considered the daughter of Heracles, I dunno, I’ll figure something out as I go along c:

And as for Cerberus, they may be goofy puppers when they are separated but combined they definitely look more hellish like that artwork c; more shadowy though, less like a paper wasp nest on fire.

Maybe just go with Daughter of Heracles and then put a paragraph or so at the beginning of the game explaining who he is and that he’s called Hercules in Rome? That way you won’t have people complaining about it not being the accurate name from either side and you give people some helpful info on the guy, which is especially useful for those who only know about him from the Disney movie.

I have already talking adamantly in the chronicon game. SINGLE PLAYER GAME no author should in a game Interactive choose my name for me most if is a written story. I role play I have a name in my mind for my character and I would not remember yours or feel integrated when You call for instance Sylvia Marissa … I would be asking myself Wtf who is Marissa. ?
My game my name lol. Why the author should give a shit if I call my Character Mara? It don’t affect the artistic vision anyway. It is a stuff I have never understand

I understand what you mean, I was just curious as to what others thought c:

If you do give the MC a new name some characters, Heracles for instance, will be stubborn and still call you Macaria. You can correct them but depending on who it is they may never listen >>

I could certainly like that and is a good deep role play choice. Always later one I could use the excuse to destroying the people who called me otherwise lol

What if the mc’s name stays as Macaria but you can choose a nickname for them?

What about those of us who are going to chose the trans options. We wouldn’t want to be stuck with our deadname.

I mean having to keep a female name when my mc is a guy. As trans men are men, no matter where they are in the transition. Though before the official transition at the beginning my mc would probably use his preferred and correct name as a “nickname”.

Good to know “dad” is a transphobic asshole then.

He can call that name all he wants but my mc will absolutely not heed it.

What about those of us who are going to chose the trans options. We wouldn’t want to be stuck with our deadname.

Don’t worry I just wanted to know what others thought about the subject, you will be able to choose a new name or keep your old one, it’ll be up to you c:

Good to know “dad” is a transphobic asshole then.

He can call that name all he wants but my mc will absolutely not heed it.

but i’m curious, say he did start calling you by your chosen name and pronouns, would you begin to forgive him?