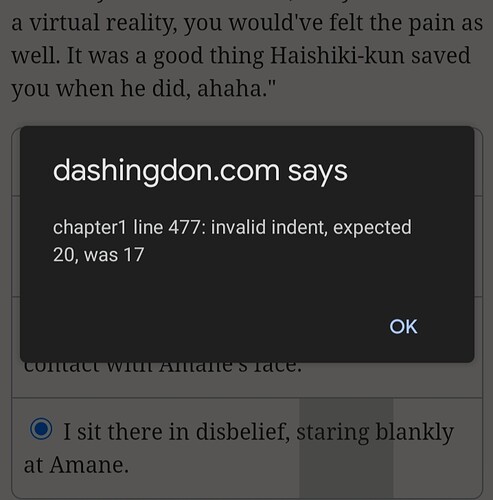 Sorry, I fixed it! Thank you for informing me!

this is cool! this whole wip makes me feel so giddy and ive been smilin the whole time i was readin. its already so good and im excited for the rest. hope chair boy wont be grumpy anymore. ngl i kinda wanna befriend him. he feels lonely for some odd reason haha

As a siren, are you able to switch between legs and a tail or can you only choose one?

Yay I been looking forward to the new update. I already done the first ending and got left with questions about Amane since he seems so shady and creepy.

The second time I went with the true ending for now. The testers were unique and have their unique quirks. It was nice to have them introduced together instead of random times and places.

So far it’s good. There was no bugs in all my play throughs

@yb_minhee Thank you! Don’t worry, you’ll get a chance to talk to the testers more after the next update!

@A_Z_U_I_A Nope, you can only choose one and stick with it through the end. I don’t know if you’re interested, but here’s a bit of siren tidbit; in Xoliv (the world of Playground of Gods) the sirens with tails are hardly seen on land because they need to buy chairs to help them move around, and they’re not cheap. There’s no Little Mermaid magic to change their tails into legs, sadly.

@Christopher_Bull Thank you for trying both paths! I’m glad that you weren’t overwhelmed by all the new characters, I kept wondering if it there was too much information as I was writing the scene.

This seems fairly well put together and polished for how quickly it was updated. There were a couple times I was sure the next screen was gonna say play again but it kept going lol. Getting a kick outta the characters so far and the dialogue options are pretty funny. The general vibe is very entertaining. Also I tend to enjoy short stretches from other pov’s as long as they don’t drag out too much. It’s often a great way to showcase a character’s personality since it offers a more personal reference to what they’re thinking or how they would react to something

So I went with the “refuse to playtest game and live normal life” route that’s advertised (because I figured somebody ought to talk about that path, what with everybody else talking about the playtesting path already), and I’m curious about whether you intend for it to be a non-standard game over, or whether there’s plans to extend that route and have it be demonstrated that not participating in the game and focusing strictly on your studies is an ever-increasing struggle due to various factors trying to force you to be a part of the playtesting?

Like, say, for some reason, Amane/their bosses is/are secretly really bent about the fact that someone turned down one and a half million yen and the chance to be part of what may well be the biggest game on market, and so they become determined to force you, the player, into the game in spite of your decision to, I dunno, avoid a PR scandal that might erupt if news were to spread that people were refusing frankly absurd amounts of money being offered for testing a game? Or, maybe like, The other playtesters recognize you outside the game due to you showing up looking exactly like yourself in the game world thanks to Amane’s meddling, and maybe the friendlier ones try to convince you that the experience is really worth a look and try to get you to change your mind about it?

I’m just spitballing, of course, and it’s your story so you, of all people, have the right to ignore everything I just typed. Those are just a couple examples I thought up of how one could extend that route.

If saying no to playtesting means game over (heh), then that’s fine, I just want to be clear about that so that I know whether I’m supposed to be looking out for more updates to that side of the story or not - simply because, you’ve mentioned in this and the previous update now that players have the option to make this choice, which reads to me like it’s going to be a major thing in the plot.

@Zyrios ya know I really like your spitballing there

would be a cool path to play if it went deeper.

@Nick_Miller Thank you! I may or may not remove the last scene with Leon later on, but I’ll definitely keep your opinion in mind.

@Zyrios Thank you for playing out that ending too! Unfortunately, I don’t think I can extend that route any further due to some reasons I’ll blur out just in case, haha.

Though a big reason is because I don’t want players to think ‘I said I don’t want to join, why is the game forcing me to join? The author is trying to force the ‘correct’ route on me!’, other small reasons are:

As you can probably guess in the non-tester ending, Amane and SIPHE are not the type that chases. They are the ones who extend offers. If you want to join, you can, but if not, they’ll just simply take their business elsewhere. That’s why Amane is so quick to just ditch the MC to look for some other testers. I wrote the refusing route with a cautious MC who doesn’t want to be dragged into trouble too, so I don’t think they would go broadcast the fact that they were offered by SIPHE just in case the whole company came after them or something.

Additionally, I’ll have to put in ‘angry and unwilling’ choices for the MC, like actively refusing to participate in the events in CoG because the MC was practically forced by their own will to come here, and it’ll be too much coding for a game already estimated to be pretty long.

Though, thank you for sharing your thoughts! I really appreciate the fact that you took the time to write it all. Just treat it like Super Paper Mario where if you refuse to save the world you just get a ‘Game Over’ lol.

Sorry that it’s been a while, I originally planned to finish half of chapter 1, but it ended up being much longer than I expected and I could only write a quarter of it…And now, with at least 32,000 words added, the whole thing is around 47k words now!

So, for this big update, you can…

Sorry for those who wanted to interact with the other characters, they’ll definitely be included in the next update! And hopefully I can set up a tumblr page for this soon, haha.

As always, thank you for playing, and feel free to tell me anything that you think can be improved!

@Lunali my MC is a Siren. I have no legs and yet im marching.

Thank you for telling me! I’ll fix this in the next update since this isn’t a game-breaking type of thing.

For now, just imagine you’re floating towards him really angrily!

Way to end an uptade! What a cliffhanger

interesting races, there’s going to have a choice of class or weapon and fight style?

But I can only going straight and right though…

@Thanatos Thank you! As of now, I’m not planning to put in official classes because anyone can be anything they want, but the characters do kind of refer to themselves as a certain role (Spoilers: Like how Asumi calls himself a support character).

There will be a choice to pick your main weapon later on. I’ll try to put in many kinds of choices during a fight, and the outcome will depend on your stats. Like, if you try to just punch through an enemy, you’ll need a certain amount of power to succeed. If not, you only deal a bit of damage or fail, but most times your teammates will have your back, so don’t worry too much about failing and just pick whatever you want to do!

@Inquisitor_Steele Oops, I don’t why I keep writing left…Thanks for telling me so I can fix that! The options are: go straight or go right! Lol

Will there be a beast race like tiger or wolf and have with strength nd speed stat boost? I like where this is going and wanna play as beast and punch my way through

@Yeoshin_Jihyo Oh, I didn’t know until I looked it up, what a coincidence! I actually thought of what kanji I wanted to use for Tatsuya first, and then his full name came after, haha.

@kizzygm Thank you, I’m glad you like it! As of now, so that I don’t get too confused and be swarmed with too much programming, I don’t intend on adding any new races. If you want to hit fast and strong, you can pick the ‘fast’ option for your omamori at the start and choose a hard-hitting race like mechuma. Also, there will be chances to raise your stats after the first chapter!

This was really fun, I like Japanese culture and urban setting games so it already looked intriguing, and I find the cast quite charming so far. The plot is interesting too and I look forward to customizing my in-game stuff more. Also even if it may be unintentional, given the game’s cyberspace setting, I find it nice how the “Kamiya” surname also brings Digimon to mind since I’m a fan of it lmao