Can play with Japanese honorifics on or off, especially since I know some people get icky with them.

For those who just want to jump right in and see what happens : https://dashingdon.com/go/10089

‘Life without play, is no life at all’ - The first president of SIPHE, Shindō Kamiya

Some time into the future, Japan witnesses a revolution in the IT industry. Holograms, hovering cars; daily life in central Japan becomes what one would think is a digital wonderland (albeit with a bit of exaggeration). To no one’s surprise, it isn’t long until the Virtual Reality scene starts to evolve even further, and companies are desperate to take part in it.

SIPHE, the company that created the world-famous MMORPG ‘Playground of Gods’, is one of them.

You, on the other hand, are just a first year university student who moved out of the countryside to live in the bustling metropolis that is Tōkyō.

Or so you think, until your roommate drops a strange black cube and you end up in the middle of a laser fight.

Please inform me if there are any typos, boring choices, bad writing, anything in general. In any case, it’s still very early in development, but thank you for giving my game a shot!

Interesting Concept, I will look forward to this.

Oi @Lunali albeit it being extremely short to give any sort of feedback, what you provided needs more balanced stats imo…

pretty good so far, keep up the good work

Thank you for all the comments! It’s my first time writing an IF, so I’ll do my best writing this!

@Empress_Nightmare Thank you for commenting! If it’s not too much, can I ask what you mean by balanced stats? Do the personality bars change too much so I should reduce the percentage, or are there not enough choices or something like that…?

I like the concept and can’t wait for more though it might be good to put a message that says “the demo finishes here” at the end because I kinda tried all routes thinking I made a mistake when I touched the black box.

Thank you for commenting! If it’s not too much, can I ask what you mean by balanced stats?

It’s my first time writing an IF,

Congratulations and G’Luck btw, lol I too started my own first IF (although it’s ore of a private and closed project for now) in twine and it’s a headache.

Alright, I’ll revise the choices and take a deeper look. Thank you for explaining! Please feel free to point out anything else you found weird, I need the help, haha.

Congratulations and G’Luck btw, lol I too started my own first IF (although it’s ore of a private and closed project for now) in twine and it’s a headache.

Good luck too, and I hope your project goes well! Let’s do our best!

Short but I’m hooked. I’m looking forward to playing more when the next update is ready

I think this has pretty good potential, and the first part of the demo is well done. I will have to see how it goes, so I am definitely bookmarking this.

Not much to go on, but I like what I see so far. So definitely looking forward to what’s to come.

i love it and i am convinced that if you keep doing it, a lot of people will really like it. 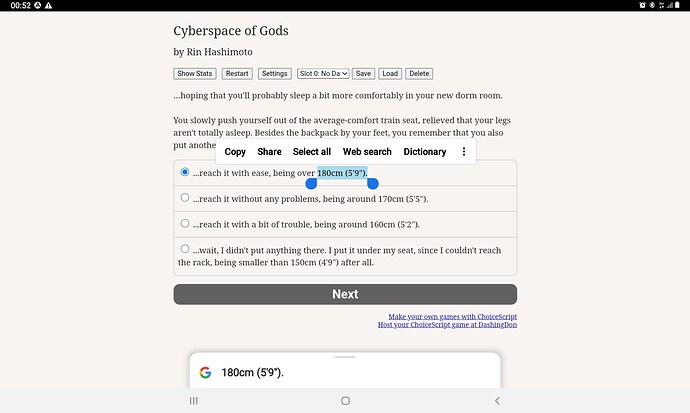 Sounds a tad like Alice in borderlands the Japanese tv series

I love the fact that at least three of the last names you can pick are from vtubers. For anyone wondering the vtubers are Takanashi Kiara, Ninomae Ina’nis, and Tsukumo Sana