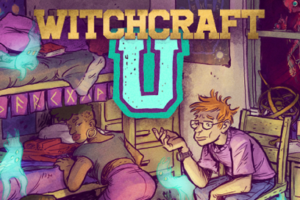 We’re proud to announce that Witchcraft U, the latest in our popular “Choice of Games” line of multiple-choice interactive-fiction games, is now available for Steam, Android, and on iOS in the “Choice of Games” app. It’s 40% off until December 16th!

Rush the university’s secret societies as a first-year Magical Studies major! Will you keep your magic a secret from the mundanes or expose the truth?

Witchcraft U is a 200,000-word interactive fantasy novel by Jei D. Marcade. It’s entirely text-based, without graphics or sound effects, and fueled by the vast, unstoppable power of your imagination.

You’re a fresh-faced new student at Larkspur University, a college for witches that began accepting mundanes a few decades ago. (Strangely, the mundanes never seem to notice the witches.) It’s your first time living away from home, and that means new spells, new friends, and new opportunities for romance!

Three secret societies control the university, and they’ve all taken a special interest in you. But you have secrets of your own: namely, your family’s underworld criminal empire–and just when you think you’re out, they pull you back in.

As a first-generation university student, the pressure’s on to make friends, find a date, maintain your grades, hold down a part-time job, and prove to your family that you belong here, while keeping your magical abilities a secret from your mundane peers.

Will you rush one of the secret societies or rebuke them? Dress to impress or attend lecture in PJs? Will you choose the path most likely to lead you to fulfillment, knowledge, influence, or wealth? What kind of witch will you be?

• Play as male, female, or nonbinary; gay, straight, bi, or asexual
• Hone your spellcraft in one of four magical tracks
• Collaborate with your classmates, compete against them, or hook up with them
• Support the mundane students or sabotage their plans
• Inherit a criminal empire or abdicate the throne
• Keep your grades up or lose your scholarship
• Avoid the abyssal gaze of the Campus Squirrel

See you next semester at Witchcraft U!

We hope you enjoy playing Witchcraft U. We encourage you to tell your friends about it, and recommend the game on Facebook, Twitter, Tumblr, and other sites. Don’t forget: our initial download rate determines our ranking on the App Store. The more times you download in the first week, the better our games will rank.

Congratulations on the release… This is gonna be fun.

Woah, there has been a time where there weren’t any new releases for months (or it felt like it) and now we are getting weekly releases. Not that I’m complaining, please keep it up if possible. I’d like to grow my to-play list even more.

I leapt out of bed today like a child on Christmas morning when I remembered this was coming out today. I can’t wait to get started playing!

Ooh, this looks very interesting, can’t wait to give it a try!

DEFINITE bug: the game freezes at the end, forcing me to restart the app

POSSIBLE bug: the game makes a big deal out of the parade and inviting your sweetheart to go together, but there doesn’t seem to be an option for it?

help request: I seem to be unable to get a good conclusion for a Poppy romance. Best I can do is to have her not mad at me after the exorcism at the end. I end at 68% with her, which apparently isn’t enough? Not even to ask her to share an apartment at the end. Anyone got any tips?

EDIT: I managed to hit 87% with Poppy at the end, but there’s still absolutely nothing about a relationship or splitting an apartment or, well, anything besides the possession talk.

Hi! Can you write into support@choiceofgames.com with more details about the bugs, particularly the freezing one and what exactly is happening there? Thanks!

I think I remember you; weren’t you one of the playtesters? Can you confirm one way or another if you’re supposed to take a date to the parade? Just so I know if I should include that in the mail?

I’m not one of the playtesters, I’m the editor of this game.

I’d have to look at the code to know for certain, but as I recall the events surrounding the parade depend on other conditions, particularly whether you’re in the Trine or not, so it’s hard to say without more details whether it’s a bug or not. But you can report anything that seems like a bug and we’ll look into it.

Speaking of Christmas, I’m hoping to get a steam gift card so I can buy Witchcraft U. And Challenger of Tomorrow and Pon Para 2.

I NEED Pon Para 2. PP1 might be my ABSOLUTE FAVOURITE game-game from CoG (stuff like Wayhaven is more like a visual novel than what I would term a game-game), though admittedly Relics 1 (sequel published when, CoG?) and Jolly Good are very strong contestants.

I hope you get it! Challenger of Tomorrow is a lot of fun, and so far I’m really loving Witchcraft U.

I wouldn’t mind a Steam or Google Play gift card for Christmas myself. There are so many games I want to play, both old and new!

Every time I try opening it I get an error message

Is anyone sure of who the romanceable characters are?

This is from the other announcement thread:

The ROs are Poppy, Toya, Niko, Ravi, and Dahir.

Hope everyone enjoys the game! It was a lot of fun to edit.

Hi! Can you write into support@choiceofgames.com and let us know more about the error message?