Where the Road leads Us. 「 WIP 」small update: april 8th

Dᴇᴀᴅ ᴛʀᴀɪʟs﹐ Tᴇʀᴍɪɴᴜs.
The last stop ‘til the final rest: smack dab in the middle of nowhere, on a road that leads towards nothingness— a small town rests inconspicuously ‘pon this dead-end, engulfed by miles of ashen sand particles. Lost into the dunes of time, shielded away from prying eyes and inquisitive eavesdroppers. ‘Tis a cul-de-sac of a shanty town. These dusty grounds have been bled upon: with blood and sweat, and raggedy creaky bones, bones too broken to carry the corpse that hangs loosely from them.
Wʜᴏᴇᴠᴇʀ ᴇɴᴛᴇʀs﹐ ɴᴇᴠᴇʀ ʟᴇᴀᴠᴇs.
It’s common knowledge by now. Eᴠᴇʀʏᴏɴᴇ knows it.

And yet. Every single living soul had accepted this maxim without batting an eye. Embracing this verity like a fragile newborn child; cradling it in their arms while whispering the softest of words, shamelessly tangled with the penumbra when the moon wasn't watching with its cold, glowing hues from its throne of dead stars and endless blues.
It is hard to question the very existence of this place, especially when something always seemed to be breathing heavily just behind the shell of your ear: each exhales prickling the hair which adorned your mortal chassis. Its fingers slowly tracing along the contour of your neck, crawling under your skin, digging, reaching for your hea— -- beware or you might still snap like a dainty lil' twig.

A little poetic for my taste

@Liza_P, @wolf12344, @Umbreonpanda :
Thank you for your kind words, 'tis short for now, but I am in hopes of updating during this week, as soon as I am able to. But I thank you.

@chukwuma_ANYANWU, @Harley_Robin_Evans :
My apologies. Right now, I am simply working with the tools which I am most familiar with, and unfortunately flowery language happens to be my forte. Although, this is yet an early draft and anything is still up to changes if my whims were to dictate it so. But thank you for giving it your time, nonetheless. 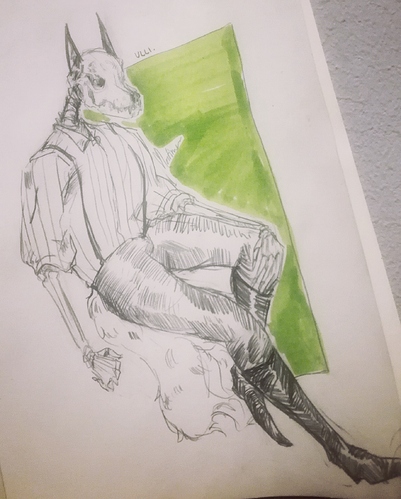 Quick lunch doodle of one of the ROs. Ulli.
It’s a bit hazy, however, I got no more time to fix it right at this very moment.

Ah, so this is what you meant by cynocephaly lich! Question, you say that we can extra and inhuman, how many creatures that MC can be?

Indeed, Ulli is a Cynocephaly, due to their dog-head that and their more dog-like physiology. The lich part plays more on the fact that they are: 1) immortal, and 2) a powerful mage. With the passing of time though, they have lost many elements of themselves that made them more animalistic (more so their fur, and most of their organic matters).

For the moment, there’s a handful, from common werebeasts to wendigo-shifters. Vampires to gargoyles. Some fiends, celestials, spirits and boogeymen, and so on.

I’m trying to play it up with more interesting mythological races, however I can not tell the exact amount, though I would be glad to take up some propositions, if it were of interest.

Interesting so far, I can’t wait to see the update you have this week.

I have to kind of agree with the statement about being a little too poetic, unfortunately. I have no issue with flowery language in theory, but there’s just so much extra that it becomes difficult to follow what’s actually going on during the story.
I like the concept, but in my opinion I think it might help to tone down the sheer volume of words, if only a little bit.

Thank you for the feedback, I’ll take it into account, as I said, this is just an early draft (1k words isn’t much to work with) and I went with what I knew better. I’ll see how it would be possible for me to tone it down, without detracting too much from my source of inspiration (whom is also known for too much description, but whose prose try to make it up for his cardboard characters).

The author who’s mojo I am drawing from juxtaposed environment vs. humanity. As such, the more detail one got from the overly flourished and elaborate descriptions: the better the reader could feel the dread, my intentions are somewhat similar to that. But I do admit that the writing in the demo isn’t up to par (rushed job and whatnot). 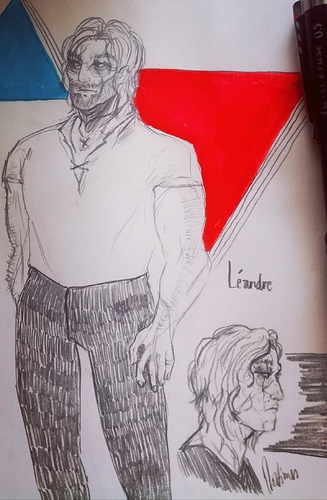 Preliminary sketch of Léandre Gauthier, one of the LIs ! Not sure if I want to go down with the “scarred grumpy guy with messy hair” trope, but it’s a starter.

As a passing mini-update:

i. I’ve been tweaking the prologue’s beginning quite a bit, to render it friendlier to readers, although I’m not sure how much I’ll be able to cut down and push out of the way. Poetry is a bit in my blood, drying it out completely would take out whatever writer’s flavour I still yield.

However, I’ve tried. And I’m in it for the long haul, so I am willing to take on feedback and help. And I’ll keep on polishing. So whatever comes out this week-end is just draft n°0.2 !

ii. I’ve been debating on an age system to add, it would unlock some choice variables depending on the age range you’d pick (ie. wisdom vs. youthful answers, et cetera). But that’s still just a concept, but it’d be interesting to have different dialogues or even events, just because of your PC’s age.

Hello. I read this WIP and I’m really hooked up. You caught my attention with the option to be various races and the diversity of the RO is great.
Though I must say the language was a bit flowery and is was a bit hard to understand as I’m not a native speaker. But I really loved it. It gives me a feel of mysticism and dread?
But what do you mean when you say that you can be indifferent about the situation? Like you know the risks and still don’t interfere, or just because the MC is ignorant?

Aah the premise is really exciting and the characters seem super cool. I can’t wait to meet them especially now that I’ve seen your drawings!

Btw, you have a birthday cake next to your name! Is it your birthday? If yes happy birthday, I hope you’re having/ had a nice day.

EDIT: The age system would be really interesting but don’t worry about it if it turns out to be too much to add.

Thank you for your time.

Yes, the current state of the language is still at works, and I do understand the dilemma (I’m not a native speaker myself as it were) when it comes down to comprehension; it is being addressed and will probably take some time, before I get it to a point where the language is not constantly too complex anymore.

Old habits are hard to kill, but whatever needs to be done, I’ll try my best for it, so I thank you for having had the patience to go through the current text.

EDIT: Whoop, forgot to address something, apologies, it’s early morning and I’m still out of somnolence.

The MC can either be ignorant: mostly at the beginning of the game - although I am still thinking of a way to make it an anchoring point throughout the game - if they wish so. Or they can be aware of happenstances in town, but still do nothing about it (and that would be the more durable form of indifference that can start from the very beginning til the end).

Thank you very much, you are too kind.

Ha ha, I hope the lunch sketches aren’t too peculiar (I can’t stand to watch that weird amalgamation of bearded Léandre anymore, pffft). Hopefully I’ll have the time to work on proper about pages for them, that’d illustrate them better.

It was my one-year anniversary on the forum, so I suppose it comes with the additional flourish of a cake next to the name now. Although my own birthday does draw near (in four days, I do have a sense of gravitas when it comes down to timing, hilariously enough). I thank you regardless. And wish you a nice day as well.

The age system is still an early idea, so I’m not too worried about it not panning out. Although the option of having it add more options or restrictions in choices could be an interesting concept on itself. And could add a bit of depth with character interactions even (ie. speaking with Ulli could feel different, since they are quite ancient - and a heart-to-heart with them about the secrets of the world as an older MC could drastically change from a conversation with a younger MC who knows little of the world). 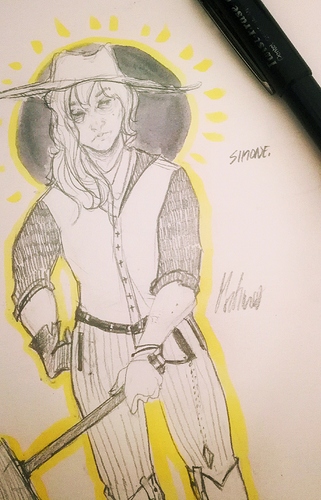 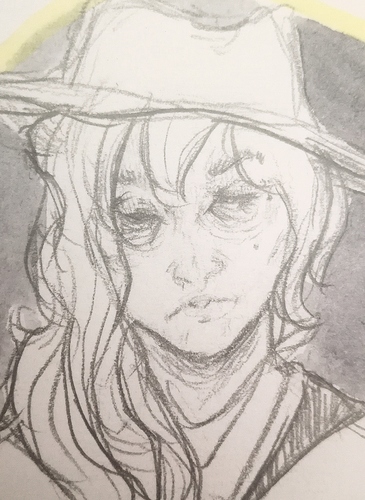 I think the only one I’m actually 95% satisfied with is Ulli, still need to figure Léandre and Simone out. But, it’s always a start.

Light update: ~2k7 words, the prologue has been revamped quite a bit, thus my time has been spent on that and figuring out how to code a bit, some more update will be added later mid-week hopefully.