The whole story is done, 46 k words in total. The link is the same, I am just posting it below so that it is easy to find.

I just had a play through the game. It is possible to have a twin flames score of over 20 points, but you need only 12 in order to get to the happy end.

It is possible to have a negative soul damage score, which needs you actually healed

The way I see it is generally an easy game. Getting all the achievements seem the tricky part, however.

By the way, I corrected a few typos and a bugs related to text sticking where it is not supposed to be as a result of labels coming one after the other. Blessings!

A new update has been made. The female character no longer appears as a little girl in the alternative timeline and the dungeon scene is less graphic. A few typos removed as well.

Here is the link:

The game is out 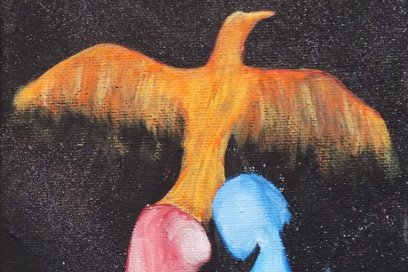 Tap into pure, unconditional love, be engulfed in a journey of oneness, and bring peace to a place that knows none.

Ah I was wondering if this was your game when I saw the description in the game store. (I thought it was called the priest and the claw but that must have been your windhammer one.) It threw me because I thought it was a child witch rather than a lady but that will probably suit it better in my opinion. (Haven’t had a chance to read it as of yet) Congrats on getting the game out

Yes, (late) congratulations on your game.

Thank you very much, @Scorpio00 and @Jacic.

I have used a small part of my Windhammer entry Priest of the Claw in the Twin Flames story. And, yes, I had to change the female character into a grown-up lady for the purpose of maintaining the romantic vibe between the characters.

It is sad that this year there will be no Windhammer Prize because of the very small number of entries. Mine was one of them, by the way. But, hopefully next year.

What puzzles me is the disappearance if two ratings on Google Play. Both of them were 5-star.

Yeah I saw the windhammer comp didn’t run this year. I didn’t submit anything due to lack of time. (I’m trying to get my current projects finished rather than starting a new one). Besides last year they had a stack of entries! It’s likely everyone assumed the same would happen this year and didn’t stress about it.

I wonder a little bit, one of the incentives for me to enter was to receive feedback people had submitted but I didn’t get any officially. (Although I did receive a helpful review on someone’s blog which was very appreciated). Curious to know if that was the same for everyone? (Maybe people aren’t submitting it as frequently as they used to?) and if that played any part in people not entering this year. (Might just have been me).

Don’t know anything about the reviews sorry

What have you written, @Jacic. Ans what are you writing?

I actually rather enjoyed the change, i thought it was pretty fun to be a big brother figure. But i agree with what you did, i ain’t no lolicon. But seriously, thank you for making this, i really enjoyed the romance. And being two people, more cog’s should have that. I’m not one for reviews, but I’ll replace one of your lost 5 star reviews.

@Tevin, thank you very much for your kind words. I guess I wanted to hear something like that because many of the comments I have seen so far have not been very good. And I realize that this game is not the typical ChoiceScript one, but it was still something I did with a lot of love

You’ve done better than me on the move a windhammer entry into choicescript front. Draconic challenges is half done, having a break from it then will go back and finish it. At the moment I’m working on getting the sea maiden finished

Do you have plans for your next book yet?

The link to the demo isn’t working.

That’s because it’s been released. Try the hosted games page on the main site.

@LazerFarm, this link is actually still working, you just need to press the 2nd “Next” button.

@Jacic, I see that you are a fellow Hosted Games author and I wandered what you have already published and whether I’ve read it

I downloaded it today

A post was split to a new topic: Twin Flames discussion thread