The Passenger is OUT!

Hey there, this is the alpha demo of The Passenger. In it you play as an eldritch abomination that’s about to be devoured by another unthinkable creature. Good news is you are pretty crafty and know how to jump dimensions to escape your ghastly fate; bad news is, you’re now stuck on Earth, trapped inside a dumb human larva.

As years go by, you realize the amount of energy you need to leave this horrible dimension behind is a lot more than you had expected. Not to mention the creature that almost ate you all those years ago never really stopped looking for you. But there’s no way it’ll pin point your actual location… right?

What you can expect from this story:

What you won’t get:

Shout out to @malinryden who was cool with me using Fallen Hero’s code for gendering ROs, and thanks to all those authors I blatantly steal from for showing me the kind of story I want to read. You people rock~

I’ve waited for a game like this its amazing, I love the prospective in which it’s played in, and the ominous beginning keep up the good work.

This seems really interesting so far!

you may want to make sure you add in a placeholder “This is the end of the demo!” scene, so that it doesn’t keep trying to load chapter 2 ad infinitum.

Also, in the beginning, MC notices a “pale shape,” which implies that your character is related to light-skinned people. This can be a little exclusionary. Maybe just make it “a blurry shape”.

In addition, Livvy’s manner of speaking as a teenager felt slightly stilted and overly formal, like she was a 45 year old noblewoman, trying to be a casual 15 year old. Maybe throw in some contractions and slang terms.

It would also be good to have some kind of indicator of how certain choices make you come across. I selected a choice with Faima that ended up making her dislike me, because the tone was completely different than I thought it would be (IE: I thought my character was being friendly, but in the following scene, she was downright rude and hurtful).

I look forward to reading more of this, though! I like it. Can’t help but feel kind of bad for the original Baby Newman, though.

Good luck with this demo - I can’t wait to see where you take it.

Good work so far! It’s an interesting concept, and I really like how MC’s relationship with Livvy is written.

A Note - Your “Prologue” image blends into a black background and so users that have this option enabled will see a big blank.

I do not think anyone pointed this out, yet.

This is an interesting start.

I guess part of me was hoping for more eldritch abomination childhood shenanigans, but what we got was certainly a nice sample.

Yes, I’m hoping people can point out the odd sentences, since I don’t currently have a native proofreader.

How do you do fellow kids? Thanks for the ideas to improve that, I’ll see what I can do about it.

It would also be good to have some kind of indicator of how certain choices make you come across.

That’s because I was going for something similar to how Empyrean handled the stat success/fail according to what your attributes were… but I realized I was making a mess of it, so I dropped it. What’s there is some alpha stuff I will cut out in the future.

The points you made were really useful

@daydreamsincolor Thanks a lot for the corrections.

I guess part of me was hoping for more eldritch abomination childhood shenanigans,

Everyone, thanks so much for the nice comments

Wow. This was a delight to read.

The first part of this story felt quite…depressing. NOT in a bad way, though. I mean, the quite tragic death of the father, the mother’s fear of letting us out alone during rain and storms (which implies David’s death was a trauma she never quite recovered from), these were quite sad to read. Us inadvertently being the cause of all these, plus Livvy being such a loving and caring older sister made me feel so guilty. It’s like I am deceiving all these people constantly, which I am, I guess. I really can’t quite express my thoughts clearly in this regard. Kudos for making me feel this torn.

The second part, however, was pretty strange. Roach, Jonny and Tamara are a peculiar bunch, and I have absolutely no clue what’s going to happen next. The last two pages of the demo left me very intrigued. Is Roach a reality warper too? Or is she talking about somebody else? Do they know what we are?

I also love the ‘outsider’ perspective of our world that is given. How a Godlike, eternal being might see the quirks of the human species is not something we see here everyday.

Looking forward to seeing where this goes. Especially what the Hunter is up to. He better not end up inhabiting or killing Livvy or Mom in the future. Please, no.

The first part of this story felt quite…depressing. NOT in a bad way, though.

I totally get what you’re saying. I quite like depressing stories.

The only thing I can answer to your comment is ~rubs hands~ yesss suffer with my little world.

Really into this so far and eager to see where it goes. The conversations between characters is great and pretty much one of the first things I notice because once you can believe in a character (because they talk like a person instead of, well, a fictional character) it’s so much easier to get invested in the story.

I never knew I needed a game where I could be an omnipotent horror in my life until now.

You have an incredible demo going and everything flowed really coherently. I really like the hook in the beginning and can’t wait to see where this goes!

Really, really good job! I’ll be following this for sure.

Very intriguing WIP to say the least, but I liked it and hope to meet more cool characters along the way

A game gone wrong might not be the perfect excuse, but you’re larvae, and larvae are stupid. These creatures seemed to come to the same conclusion.

This is freaking hilarious. 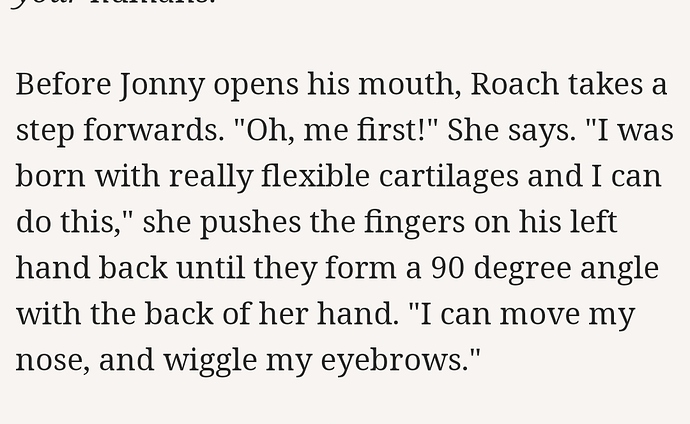 YESSSS, YESSS, YESSS, I’ve always wanted to be a elderich abomination, thank you for making my dreams come true.
No micromanaging and not stats heavy? 2019 has truly started well!
The demo is very enjoyable, i really like how the elderich mc refers to us as lavae, i like how the way you choose your stats flows naturally and i also loved what you did with the name of the first chapter, i kind of agree with what someone told above about the references towards the mc being white due to "pale form, and her rosy hands* so it would be nice to be a little neutral about it, but other than that you’ve got a very solid start, i have some questions, but for some reason i can’t blurry them so i wilk ask them when i get home, really looking foward to this wip

Interesting so far, but why Roach? Seems like an odd name imo.

I enjoyed the premise and the plot so far! Even with the short demo, I think you did a good job with making the reader feel invested in the characters (especially Livvy). Also, the MC feels 3-dimensional, unlike flat MCs in other games. I hope you’ll keep it up, and I will probably play through it again for any grammatical mistakes (but they’re probably so small I didn’t notice any).