The Butler Did It (BETA IS OVER)

The Butler Did It was a finalist in the Choice of Games contest, and it was kind of a mess. Thanks to the help of a couple dozen absolutely wonderful testers, I’ve improved the story and fixed errors galore.

Now I’m hoping to get more feedback and testing done before submitting to Hosted Games next month. Here’s a little bit about the game.

Life in Port Terris is tough. There’s never quite enough to eat, there’s never quite enough work, and your friends have a nasty habit of getting snatched up by the Constables and their bots. When the majordomo of a Great House offers you employment, a warm bed, and all the food you can eat, it’s a tempting offer. Never mind that the alternative is a long stay in the City Dungeons.

It doesn’t take long to realize that things are a little bit off here, to say the least. At Coburg Manor, you’ll make friends, battle enemies, and uncover a mystery far deeper and stranger than you ever imagined.

I would love to hear any feedback on any aspect of the game, but especially:

If you’d like to dive in, the game is available on Dashingdon: Beta is now closed!

And I’ve created a survey that I would love for you to complete after you’re done playing (whether you reach the end or not!): Survey is now closed!

The Artifice-Honesty pair now displays properly
Numerous typos fixed
Text tweaks for continuity
Goose is much more reasonable during the riot (read: easier stat checks to get her to call off the attack)
Improved glossary menus
Fixed conversation path with Metro that caused Linus to incorrectly flip to evil

I really like this game and am super happy to see how high it ranked in the contest! I will buy the crap out of this when it comes out!

Thank you so much! Nineteen twenty characters!

it will was fun play this

Is there any romance in this game?

Yes, there are three characters to romance!

Thank you, I’ll be giving the game a try now

So… I’ve got a bit of feedback. I’ll post it here if you don’t mind, since the surveymonkey box is too small for me to work with.

Overall, liked the story and liked the ending especially. It was funny, too. You’ve probably a bit undersold the sci-fi aspects in the summary, which was slightly misleading.

The relationship system didn’t seem very nuanced, at least not in the beginning chapters. My MC would’ve probably liked to get to know Adelia, Dmytro, and Linus as people, but it kept having other suggestions of over-familiarity (both romance-wise and as being best friends or whatever, which was a bit too hasty, I felt). And, I’m sorry, but the convos with Adelia and Dmytro in the workshop and kitchen about the other was just… awkward.

Anyway, as I said, liked it overall. I’ve added some low-level stuff and a few comments below. Hopefully it’ll be helpful, and congrats on being a finalist (and being able to finish such a long game in the first place!)

The artifice-honesty opposed pair is still not showing up properly. Also, if you select glossary of terms the only choice at the bottom is “glossary of terms” again, no going back to the stats page.

Loved the game so far, I am currently at starting of fourth chapter

I have played until chapter 7, and by now, i like it very much!

I have found some minor issues:
chapter 2

@Retrovirus Great! I really thought I had caught all the typos, I’ll fix all of that.

And many thanks for the other feedback. I don’t want to telegraph the sci-fi twist too much, but I will try to make it more clear in the description that there is a twist of some sort. As for the rest, I think I’m done reworking this game, but those are all very valid points that I’ll take into the next one.

Edit: Adding to this, you definitely should not feel railroaded into violence with the mob. That’s intended to be the oddball option… Most people should be finding a better solution, and it dictates how your relationship with Goose goes for the rest of the game. I’ll make some checks easier there.

@Dark_knight Ah, I think I know what you mean. Thanks!

Happened to run into a bug, where when I met theMetro, it seemed after I was done talking to her, the scene brought me back again to the same one, this time however Linus was infected, in the other time I saved he wasn’t infected (Had to kill him 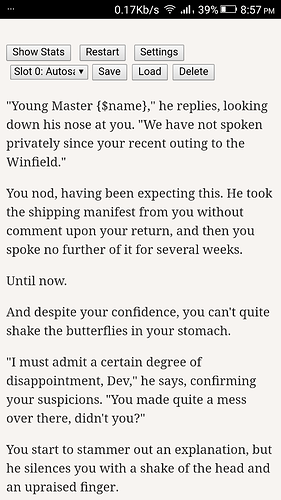 I’m going to upload a new version in the next hour or so, so save games will invalidate, and it will probably kick you off if you’re currently playing.

@Delliot
No problem happy to help.

The Artifice-Honesty pair now displays properly
Numerous typos fixed
Text tweaks for continuity
Goose is much more reasonable during the riot (read: easier stat checks to get her to call off the attack)
Improved glossary menus
Fixed conversation path with Metro that caused Linus to incorrectly flip to evil

Maybe a finish tag is all that’s missing and because of that it just goes to the next label?

Besides all that, this was a fun ride! It’s the first one that motivated me enough to make an account so I could offer feedback. As it started out, I felt like Study in Steampunk met Tally Ho and I was hooked. By the end I felt like I was in a Banks Culture novel. Everything, from Metro’s personality, to the Advocate’s drone-like behavior and of course, the tech!

Excellent work and thank you so much for making it available to play!

• In the very beginning, I chose to take the antler off of the robot after I disable it. When confronted by the constable, I waved it around and showed him what I’d done. Later, when he approaches me, I still get the dialogue where he accidentally sees it behind my back and I say “oh, that, I can explain”. So I already showed him the antler and he rediscovers it as if the previous flaunting didn’t take place.

• If I DON’T let Addie take the mind to the meeting, then choose the “politely approach” option, the following dialogue starts in the middle of a conversation rather than me actually approaching.

• [quote] You grunt in agreement, swerving to avoid a stray dog laying on the pavement. It lifts up its head as you pass, then relaxes again.[/quote]

• When going on an adventure with Addie. We can kiss her to start the romance. What about a verbal option for people who don’t want to kiss right away (“this was fun, I like you a lot”), or people who didn’t realize the other options don’t open to any other romance. Also she invites us into her room afterwards and we immediately accept. What’s going on in there? Did we just cuddle, did we hook up? Wus good? It’s assumed we’re like doin it right… Some people might not want to fall into bed like that though. Clarification about what we’re doing, and an option to decline her offer would be nice.

• I always appreciate when the author has a glossary that explains terms and lore. Thanks! How would you feel about a little explanation of the stats as well? The skills are pretty straightforward but I’m not entirely sure what the other bars are for (tbf I haven’t finished playing yet).

First of all, props for the genre and theme. I’ll come back later with more in-depth review, but I just wanted to pop by to compliment you on your work.

But I do agree with @cottoncandy that having a Glossary (especially with as a colour world as yours) and a description of the cast are both a great help. Adding an explanation of stats could increase its value though.

And as @A.Karimov has written, your story has a touch of Study in Steampunk in it, to which I can only say “Awesome!” and go on reading.