It is unlikely that I will have time to do any sweeps tomorrow; if you would like me to do on the remainder of the weekend, now would be the time.

Hey Thanks, editing is taking a little longer than I thought, so hopefully I can get an update out by early next week to look through

I played the demo version of the game yesterday and I have to say, the story of the game looks good to me… I am very much happy with the plot so far and even appreciate you for developing a mediaeval story game as I love them a lot. @Kenneth_McGrew

I have few things to say regarding the game:

Edit: 7. Also, you should keep the prospect of having our skills decided by a set of choices… Like if we spent our childhood fully focusing on learning fighting tactics or to talk sweetly and make out of our work from that… Like those choices help a player to feel more immersed in the game.

@Kenneth_McGrew
First of all;
Lord/Lady is not a title, it’s a style. Like in His/Her Majesty.
Lord/Lady can be used as title for an owner of a manor or a small hamlet(e.g Lord of “village name”), since there’s no title lower than Baron/Baroness in the peerage of medieval times.
An owner of a castle is titled Baron/Baroness in addition to his other titles, for example the mc is the owner of Castle Elmfoot, so one of his title should be Baron/Baroness of Elmfoot, not Lord/Lady of Elmfoot.
The mc is also a ruler of a land which should be titled properly, if his/her land is big enough to create a small kingdom than he can be titled as Duke/Duchess. So mc’s titles should be Duke/Duchess of “land name”, Baron/Baroness of Elmfoot. It’s not uncommon for a nobleman in medieval times to have more than one title.
This is the list of medieval peerage titles alongside their styling;

I’m rather confused by the titling in your game, because no matter how great you are, you’ll be titled Lord or Lady and that’s not how things work out in medieval times.
As for Knights, male Knights titled “Sir Knight”, and “Dame Knight” for female.
You’re asking what’s the title for non-binary Nobless? There is none, you see in medieval there’s no such thing. Even if you’re non-binary you’ll be styled and titled the way your appearance.
I understand that you are highly inspired by Game of Throne, but peerage in GoT is such a mess. All they know is Lord/Lady nothing more.

That makes so much sense it scared me. Dude thanks for the info.

Firstly thanks for reading, posting, and for the comprehensive feedback too! really appreciate it.

for example if you let your population dwindle through unpopular opinion, you will end up with an army but no-one to do your bidding

#2. the map will be integrated into the stats page, and will be fully illustrated, its a moving feast as getting the story into choice script only started on 1st of March, sketches etc will be replaced eventually

#3. i like it, i may just use something along these lines, there has to be an advantage to winning on your first take though, so maybe there’s an easter egg / secret ending. scribbles some notes

#4. it comes from the ~16th century, sometimes referred to as “milord”, although part of what i want to do is build a world with customs and traditions, referring to nobles as my Lord, my Lady is one of them.

#7. Skills are all set by the MC choices but they are not transparent or present in the stats (currently), im undecided how i wish to portray this yet, often when i play COG titles i end up picking the choice with [desired trait] in it, so im trying to keep it fluid, i.e. with influence options if its in the stats im often checking the relationship stats before i might click that option.
in the real world we wouldnt know our chances before making the choice, which is what im trying to bring into the game, i.e. those who read will be rewarded - Speaking with characters and keeping relationships healthy will reveal secrets you might not otherwise know.

Thankyou! maybe a little clarity around titles will help early on, after all its not an historic world its an alternative world with medieval themes and while peerage is a big influence for my story its not something i will replicate other than in an “Alia” world way.

but i may take some snippets from Barron/ Baronesses so readers can relate.

yes non-binary was never a thing, but in Alia it is

its an alternative world with medieval themes and while peerage is a big influence for my story its not something i will replicate other than in an “Alia” world way.

I mean, you’re the head of a powerful Noble house and yet you’re titled only “Lord or Lady”? Come on you can do better

.
You can create alternative titles since it’s an alternative world anyway. Warden of the South perhaps? lol
You’re titled Lord and you’re styled as Lord as well. That’s . . Imagine you’re titled King of England and people styling you with “king” as well. That sounds like this “Apologize King, i mean not to interrupt you but there’s something important needed your handle”. Sounds more like an insult to me rather than reverence

Thanks! there’s a little update gone live today you might enjoy

Here you might say, you won’t become the lord of the house if you’re aren’t 18 but think it in this way, if the people wants the ruler of the house to rule his lands rather than his advisors, thus more and more pressure would be there on the advisors to make the MC the ruler of the house as soon as possible or there might be a rebel building up as they don’t like the way how the King’s representative is ruling the lands… That might make the MC the lord of the house even at the age of 16… Ofcourse it might be a hidden starting of the story if we choose some correct spots like traveling lands belonging to our house, getting to know the commoners and even getting to know their problems…

I would also like to thank you for giving me the credits for finding the bug. It motivates a person like me, yk

Edit: I don’t know if this is a bug or you kept it like that intentionally so that you can put correct things here but I would like to mention them, I have marked them through red colour: 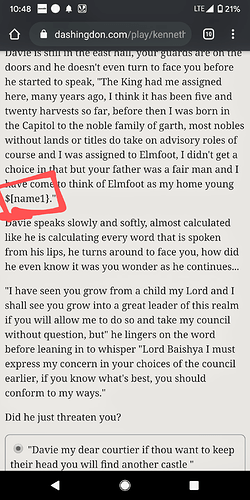 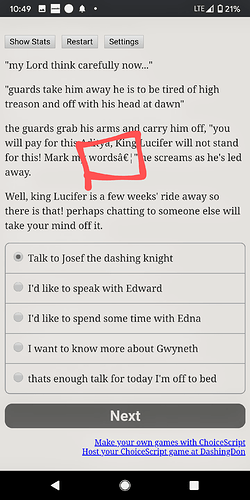 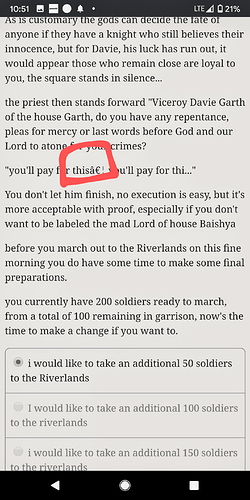 Also, this page keeps loading due to which I am not able to move forward to the next page: 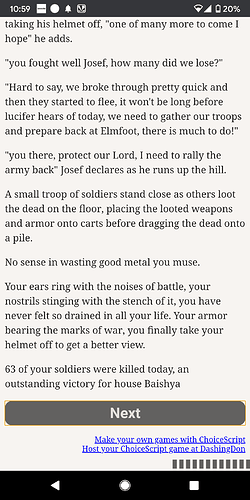 Also, I wanted to know if the MC can be the ruler of Kingdom instead of his cousin… Coz I think I will be more interested to place myself in the throne rather than to put my cousin in the throne.

Yeah i agree with this, my determination to put a cousin that i don´t really care about in the most powerfull position in the whole kingdom is not that great… But if you decide that we can´t become the ruler of kingdom ourselves and our cousin is the only option, don´t makes choose who we support in the begginig of the game without meeting the King or this said cousin we don´t know any of them and we could be replacing King lucifer and putting someone even worse in his place.
About the tent scene with Bart (i think that´s his name) you can´t present us a choice like this at the begging of the game, when we haven´t even meet anyone, i understand that your talk many times in the prologue how bad King Lucifer is but i think that we should meet him before judging him because what you see from wrong i can see as the right and most safe course of action and a rebellion is something that can´t be consider in a second like it is in the game it takes a little bit of time we can´t forget there are lives depending on this choice, we need to consider our option and chances of winning, we need to consider even if this is the best choice and if we aren´t replacing king Luficer for someone worse.
I don´t ask for all this thing but atleast some pages before we make a decision like this, where the each side viewpoints are presented to us so we can make the best decision for our character.
I understand that this is fictional world but still there are things that never change wherever we are.
(Sorry any grammar error, my english turns out to be that good when i writte big walls of text)

Do you want me to do the next sweep?

do you really think I wouldn’t let you become King though??

It’s a complex story, there is much to uncover

Regarding the choices I really want to take the reader through a journey, sometimes you will have to make a decision based on what you know right then and there.

you can´t present us a choice like this at the begging of the game, when we haven´t even meet anyone

I disagree, the story clearly states that the MC hasn’t ever left their castle except when their father took them hunting, this means the MC has never gotten the chance to meet King Lucifer. Also, you may not get to meet Lucifer before given that choice, but you do meet the viceroy, and the viceroy is supposed to represent the Kings interests. Finally, sometime you have to make decisions in life without all the facts, I appreciate that this game is being realistic in that sense.

All that said some childhood memories of our cousin, before we have to make that choice would be nice, because the MC practiced fencing with them according to a conversation with Gwen.

Is it really a spoiler if it’s in the original post?

Tbh, in the game, I loved to behead Davie as he was being a pain in my back…

I see you too have great taste in enemies, and how too deal with them.

I think, as this is the demo of the game, so we are not provided all the contents of the game yet. If I am interpreting it correctly then the author means there is much to uncover when the actual game releases, it is just like giving a glimpse of what the game will actually hold…

That’s true as well… In our life, we are not always provided with all the facts of the event but still we have to take a decision at that moment and that decision impacts our life… It’s interesting…

Tbh, in the game, I loved to behead Davie as he was being a pain in my back…

True, i meant in the sense of how you get to do that.

Good idea on the Renley flashback, if your inquisitive you will be rewarded as you’ve found