While I do believe that it has a lot of potential, I have to agree with some of the posters here; it feels rushed, some of the dialogues are akward and unnatural; they succeed in providing us with the information intended but feel too much like reading from a script rather than natural speech. Taking some time to polish the demo will certainly be beneficial to your goal; which as you said is to gauge up the interest for the game. If the demo does not reflect the quality of the finished game at least in some part then it’s impossible to say for sure how interested people will be.

Thanks for the comments all, a few minor tweaks have been added to the demo link, the prolog which was missing is now included (was a missing scene) with a small grammar sweep, but there is much more to do on this front mind!

the game still finishes at Lord bart because i want to get the first demo complete before moving on so you won’t be able to progress from this point for now.

Demo re-written by mid march, and if still positive i’ll move onto chapter 2 by end of march.

once again thanks for taking the time to read

I can look for the mistakes ,and you could change them, if you wanted?

I could help you with writing and coding if you want? I have some experiences in both area XD Altought i’m busy with my own wips so i will not have lots of free time. If you are up to it DM me and we will discuss about it.

So I was looking into whether you should change Dame to Lady. I’ve been doing some research and both titles are pretty much the same.

So in my opinion feel you should change Dame to Lady. Just because the title feels… I don’t know… it just feels right. I don’t have a proper word for it. But its entirely up to you to change it or not.

On the other hand loving the prologue. Didn’t do a grammar sweep as yet. I’m just looking to see if everything fits.

@Book_Devourer That’s a kind offer, i think im getting somewhere now with some amendments, there is still a bit of capitalisation to complete so probably ignore that for now but yes that would be great thanks.

@Bulk_Biceps good idea, lord/lady but there isnt one for none gender specific, do you have any ideas there? - i’ve been scouring peerage and all-sorts but best i got is “ruler” which i don’t particularly feel it does it any justice.

just a quick update too, few amendments to the intro, some text re-writes and i’ve unlocked the final page so it should now get to an end game screen rather than an error, the remaining chapters i’ve written are still locked though, hopefully the “demo” is in a better place now.

i’ve also slipped an image in there to help illustrate Alia, perhaps this would be useful in the stats so the player can recall it. thoughts welcome on that (its a working image which will get illustrated)

link is in the OP of course.

@Book_Devourer That’s a kind offer, i think im getting somewhere now with some amendments, there is still a bit of capitalisation to complete so probably ignore that for now but yes that would be great thanks.

Firstly, great story. I am pretty excited to play the full polished game, assuming you make it through till the end. This is precisely the type of game I’d like to play in the medical genre especially being a fan of Swamp Castle and Great Tournament games. I hope you add detailed castle and estate management aspects like managing economy, agriculture, etc basically some level of micromanagement.

Prologue
(I probably am being a bit pedantic with these) 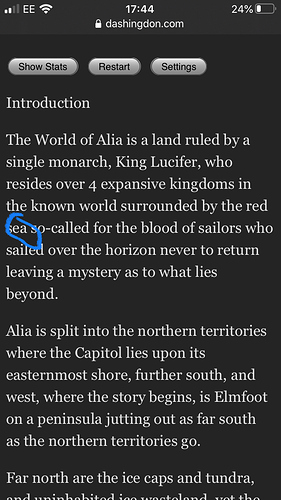 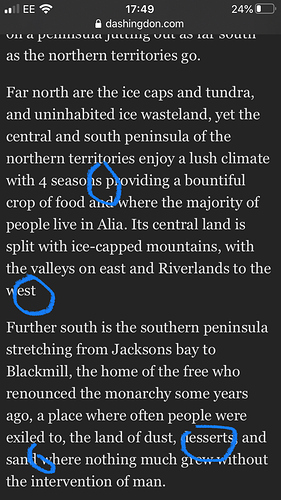 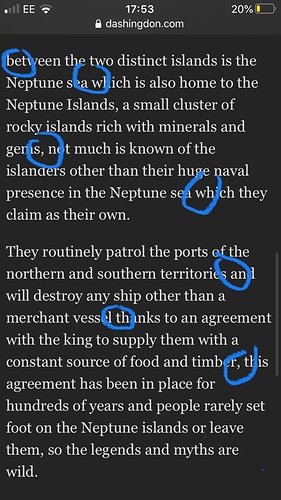 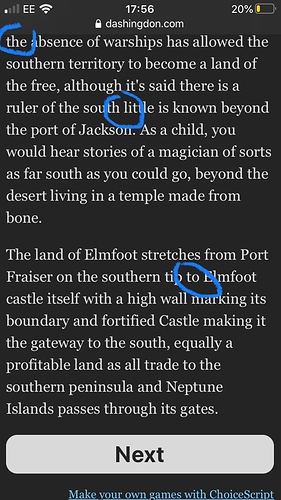 theres a bug on scene three too at the minute when talking to Edward, and i can’t seem to resolve it

i updated the file but dashing don keeps coming up with the same error, ill try and fix it tomorrow with a fresh mind as its working in CSide. 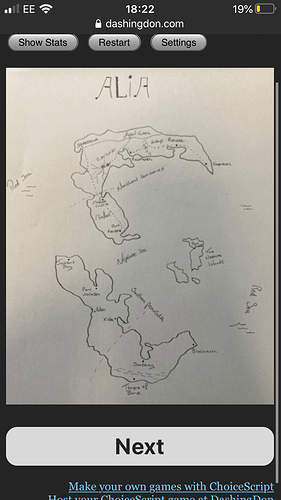 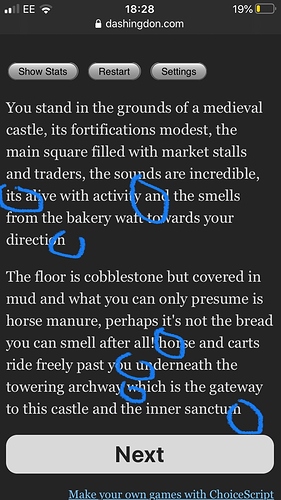 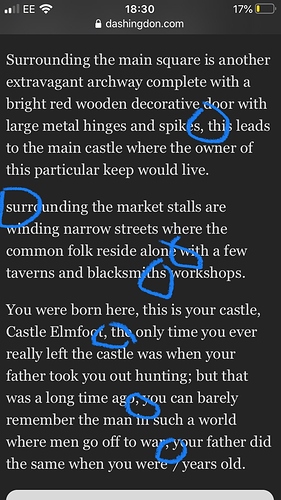 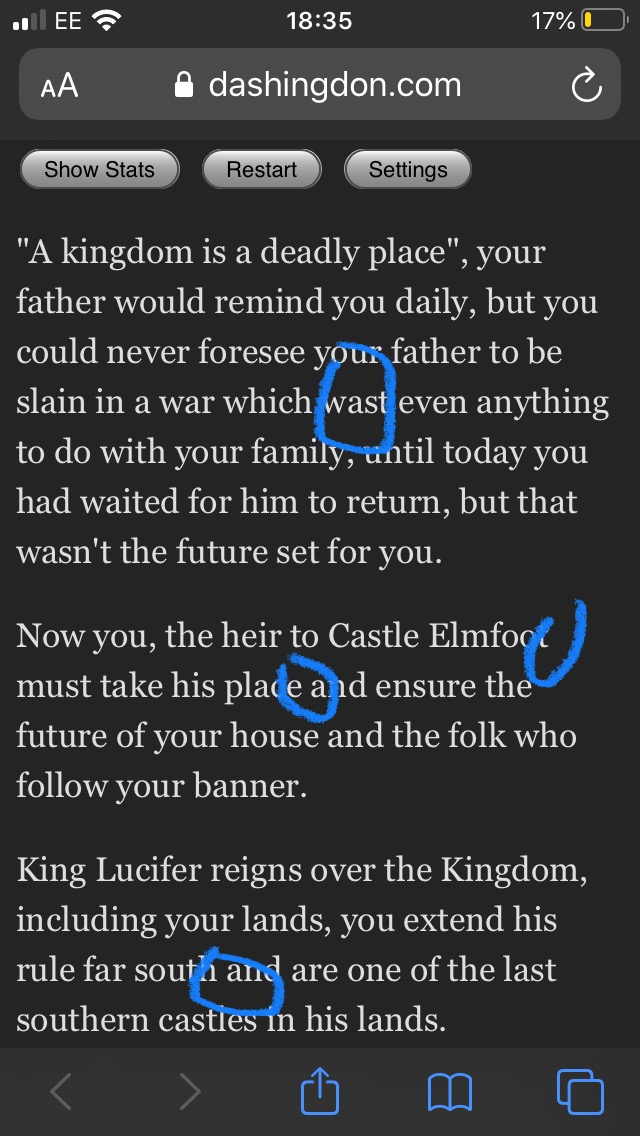 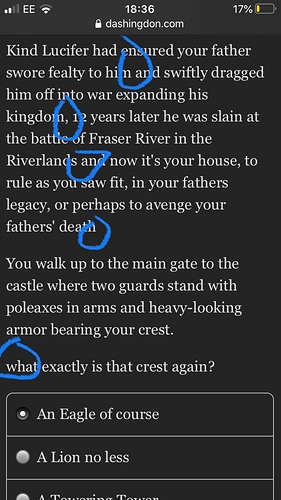 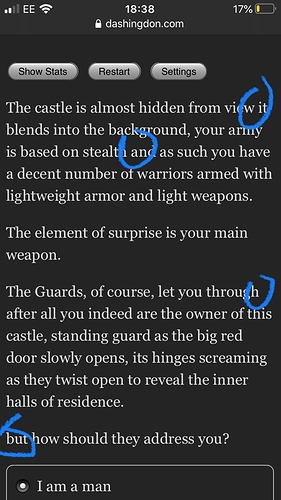 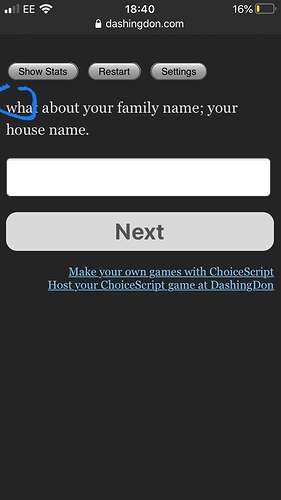 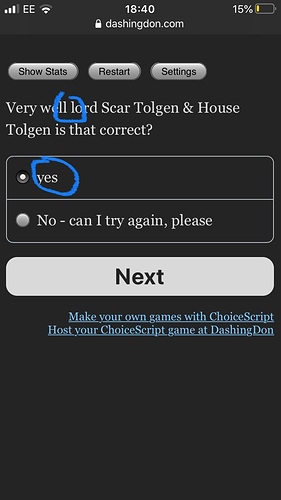 I’ll do the next check tommorrow.Also,am I basically the grammar guy now?

@Book_Devourer many thanks for the input, hold off on the others as i need to do another basic sweep on the next scene

Let me know when to do the next sweep.

good idea, lord/lady but there isnt one for none gender specific, do you have any ideas there? - i’ve been scouring peerage and all-sorts but best i got is “ruler” which i don’t particularly feel it does it any justice.

You might find something that suits your world better there.

I’ve been looking, haven’t found anything. But ruler seems to be the best option right know. Unless someone else knows, I’m drawing on a blank here.

I won’t be able to do many sweeps today.