Time for a little clean up…

“The Book Of Alia” whats it about?

The Book of Alia - Lucifers Dog, is an ambitious project to create a 400,000+ word interactive medieval adventure novel where your choices control the story.

Currently the live word count in the demo is 50,000 words

It’s entirely text based although does have a world map for aiding the power of imagination.

You play as an heir to a small castle in the realm of Alia, a parallel world with knights, lords, kings and queens, and a smattering of mystic magical unknown lying in the south.

As lord//Lady/Count of your house will you fall in line with what’s expected of you or go rogue and conquer the kingdom for yourself (if you can without dying that is) whilst mixed up in a web of love and lust?

In true keeping with medieval life, the path of a Noble can be fraught with danger and risk, and you must weave your way through the world of Alia and liberate the throne.

I’ve got a decent roadmap laid out for the game and we’re currently on chapter 4 with some 50,000 Words to play through.

I plan on updating every 2 weeks with a chapter, and i really want to get this novel complete by mid summer. The story is there it just needs coding which im learning from scratch, i.e. from the 1st of march this year, so please bear with the odd bugs, let me know about them my leaving a post below, and i will fix usually within 48hrs…

feedback im after is;

again its my first title, first attempt, so please be constructive, but equally if its trash then i’d appreciate your honesty

Do you play Crusader Kings 2?

To play the demo, which I’m trying to figure out how i can host this?

You can host the demo on DashingDon . A user contributed free hosting website for ChoiceScript games. This is where the most WIP’s are hosted, so give it a try, it’s pretty easy to use.

i wouldn’t class it as adult, there will be romance and death in there although nothing graphic, but beheading & executions / war / battles etc will be referenced frequently

A game that has intense horror themes, graphic descriptions of violence, explicit sexual content/erotica/pornography, rape, etc. is usually considered adult content. It is mostly determined by the author’s tag and moderator’s/CoG staff’s decision, if you don’t think it belongs to adult, then it should be fine until someone says the opposite.

About giving more feedback on whether it is adult or not, I would need a demo; so it is best if you focus on putting the demo out there first.

Thanks - give me half an hour and it will be uploaded with a link so check back here shortly.

This sounds great; are you planning on charging to play, or just to remove ads?

PM the moderators when you would like this topic opened again/have the demo up!

ill wait for feedback though before i commit more time

So you really don’t want Feedback on grammar? I saw a grammar mistake on the first page.

Got an error when I tried to kill Bart.

Hi Epic, not at this point thanks, i understand there are a lot of grammatical errors in there, I’m just gauging interest to see if i should devote more time into it before doing a grammar sweep.

thanks for reading though!

@Cantthinkofone Thanks ill look into it, as that option was working on CSide.

I think it is good so far, and definitely worth a grammar sweep.Especially speech marks, because it is very hard to tell who is talking.

Also,I can’t get further than 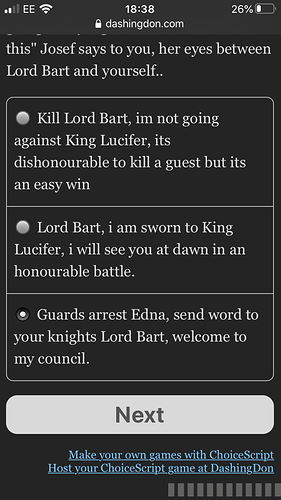 Great! There isn’t much more after that anyway

it appears I have an error with moving to the next scene regardless of what option you pick, should be any easy fix though I’ll update it tomorrow.

Thanks for reading and commenting back.

Yeah me too, it kept loading when i chose to arrest Edna and welcome Lord Bart

Hmm… Then I look forward to the next update. I really like medieval stories.

That aside, I’ll try to give my opinion on the story. I’m going to be totally honest, but don’t take it the wrong way.

So, i think the writing is rushed. I know you said that this demo is just to gauge interest of readers but it’s worth a thousand times better to post a polished demo to the best of your writing ability. Make it memorable. It’ll make us want to read and reread.

Yeah, i agree with this, just in one playthrough i found a lot of errors and as it was refered by another user you need to be carefull with speech marks, there were times that it was pretty difficult to understand who was talking and there are some simple errors that should be fixed, because in my opinion this is something if you want to show the readers the quality of your work, so yeah i think you should do a grammar sweep before more updates because it will only acummulate more errors and then it will be even harder to correct them all…
But anyway, i love medieval games and this one was very good, a bit confusing in the beginning (probably my fault, because i tend to skip some lines), but overhall i can say that it was interesting to read and im looking forward for future updates (along side with the grammar sweep, if you decide to do it)…

This is good, as in story wise. I feel that you could have included a prologue to show what happened to the MC’s parents. A splash of information. From there you could reveal everything else as the story unfolds.

Now your stat page, I know this could be just a basic set up but I hope you do include a lot more at a later stage. Like including an inventory section where your main, secondary weapon could be and the type of armour you could be wearing (light, medium or heavy), each with a positive and negative. And not just that personality and strategic traits too.

I would say include Land/Castle upgrades but I not sure how you’d feel about that.

I have quite a bit to say but I don’t want to over do it.

Nice concept with medieval theme but as the other users mentioned about speech marks.Its frustrating to understand the conversation as it is and the beginning felt somewhat rushed(!?). Also got an error while trying to arrest Edna(It just keeps loading).