I have recently started working on my low-magic medieval fantasy title, The Song of Exile.

Once, you had a bright future in front of you: one of the most brilliant students of the healing arts, not to mention a child of the man who changed the course of a civil war, you seemed to be destined to be a physician to princes and a power behind thrones. Instead, a great scandal with darkness at its heart lands you in a semi-genteel exile in service to a minor household in the far north.

However, what seems to be a place of silent, grave-like peace soon turns out to be anything but. The countryside is still bearing the scars of the war; the hearts are brimming with old grudges, and the woods are teeming with outlaws. Politicking doesn’t cease just because of the physical distance from the court, either.

And, of course, there is the matter of the landowner you now serve – a noble-born warrior who seems to have come into their inheritance mercilessly early. They seem a quiet and capable leader, impervious to pain, but they have scars and secrets of their own…

Now that the beta is open, I am looking for both high-level (structure, plot, characters arcs, worldbuilding) and low-level (particular scenes, dialogue, typos etc.) feedback - not to mention possible technical issues.

And, of course, there is the matter of your new master – a warrior-nobleman who seems to have come into his inheritance mercilessly early. He seems a quiet and capable leader to his men, impervious to pain, but he has scars and secrets of his own…

Haven’t finished, but I’m really liking it so far. Should probably put that the noble man can be a noble woman cause I got Edwina lol.

can you add a plot where i can steal the throne

The MCs a doctor lol

I’m really intrigued by what I’m reading! It seems like an interesting plot, and the worldbuilding is good and easy to visualize. I can’t wait to find out what we’ll do to solve that nice little problem the demo ends on. We haven’t met many characters but the ones we have met seem to be nicely thought-out and have their own motivations.

The three different paths we can take to spend a day are all very interesting in their own right, and I find it hard to choose one! Will we still meet the people from the infirmarius branch if we take one of the other two?

I’d like to see (mostly because I’m just a nosy person) a quick list & description of the characters/ROs.

I also had a question about a choice in the exploring the castle path; what are the conditions to say that we think his family supported the rightful king? I played a couple of times but it was always greyed out.

Just two quick pieces of feedback (that might be more personal preference than not);

Thank you for the feedback!

the concept sound nice. But I would change the description of the master/mistress to they/them if you want to give the option to make him female. It could feel like you arent playing “the right way” otherwise (just a suggestion if the character is meant to be primarily male it does make sense to keep it that way)

Ok, will rephrase it!

Hi, I haven’t got far but I noticed we can only choose from the list of the names but we have to input our surname? That’s a little odd

Especially with a setting we are unfamiliar, it might be helpful to have lore-friendly surnames.
And can you be bisexual in this game?

Ah, that’s great - I was wondering if the choice at the beginning was locking me into something

I really liked how we could become friends with the herbalist in medical path and I’m wondering if you can meet her in other paths?
The scene where we uncover the truth about the past allegiance of our Lord was also very impactful.

Is there any romance in the game?
Also, there are inconsistencies in pronouns. For example, when I go to visit the infirmary (or something like that), the man who greets me refers to me as " a man of his hearts", “son of statesman” and other things like that. Here is an example: 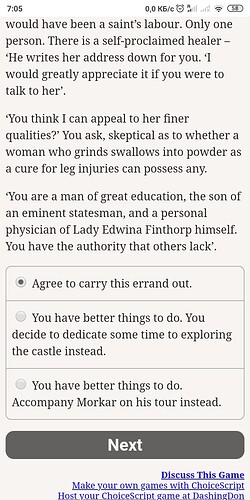 WoW this is very interesting but it feels SO weird reading this.

@DearestAnnabel a small typo:
“On the other hand, you wouldn’t have been the man you are if you simply made peace with life’s tortures.” My MC is female.

I have also noticed through out my play so far that playing as a woman I am consistently seeing man spoke as description as well as conversation as being a man.

Thank you for the replies - I’ll comb the text for pronouns mistakes!

Substituted the words you’ve pointed out for ‘person’.

Short, but seems interesting. Hope you will add the possibility of randomizing the name of the mc.

Oh, interesting game. I’m not able to give really constructive feedback for now, I think - it was really short. But I’ll be waiting for more, and play at least one or two more updates before deciding if it’s my thing.

I would like to ask a couple of questions though!