Workshop Thread: Post your little games or demos for feedback

Logotipo Comida y Bebida Elegante en Negro y Crema (1)1080×1080 778 KB
The goal of this thread is giving a room of games not ready yet for the Wip stage; because or they are too small, or the author isn’t ready to write one and is practising the mechanisms to write one in the future

This way both readers and writers can have a place to gather all those games together, and give feedback easily, and let more visibility for the WIPs that aim for publication.

Now as an example one of my games

Elvis At The Beauty Contest > ChooseYourStory.com

Looks awesome Mara! Thanks for all your hard work!

It is nothing! I am glad to be of assistance, now, I only hope people post their games here and let more space to wips that aim for publication and have bigger demos.

It also will help people starting, as well, because myself and others can focus the feedback in helping them to improve and learn to finish small stories before trying to write a long game aiming to publication queue.

Maybe I'll Tell You I Love You (Book One of "Flame and Ice of This Hollow World" Series; prototype, WIP, rough draft) a small test demo in last post 26-11-2020 Works In Progress

Hi, everyone! This is a small demo to test the choice of gender and appearance of the character. I’m just need your opinion, because I’m not a native speaker. A small test demo sorry about my errors

Can anyone give your opinion or feedback? Cann I add something? I’m not native speaker.

This little demo to test the choice of gender and appearance of the character.

My advice is for no binary add more options that zir, as it is not the most used so people can choose the pronoun that defines them.

I really recommend you use this thread code.

Hey everyone! I’ve made an example startup file for randomising or choosing NPC genders, and PC pronouns including entering pronouns. You can find a playable version here and view the full txt file here. Let me know if it’s useful, and if you’ve got any questions!

I had a look and peeked at the code and it looks functional. You can always expand it as you go.

It seems like the most important thing is to flesh out some of those placeholders with your story text and to add in your first plot-related choices. Another things which you could work on if you have not done it before is to display your character creation choices/variables in a pleasing way on your stats screen, which is blank at the moment.

Very nice! I like the fact that the forum has this corner for starting writers to post their little pieces.

The opener of a French Foreign Legion adventure I’m writing. It’s around 3k words long. If I can get feedback on style, that would be great!

What I notice is you have a concise rounded wording, with detailed descriptions without being too purple in your verbose. However, your intro is slow and telling, you describe what is happened in a way that is not immersive enough.

I personally would prefer the character walking through the market sweating chat with a comrade and a new member that naturally and organically ask Where you from and what is your name. That will make the intro more dynamic and immersive.

I really like the writing! The way you’ve described the humidity and the general weather takes me back to all the times I spent in my sub-tropical village without access to an air conditioner, haha! And I love the fact that we could range from being totally innocent, to being complicit or being related to the guilty party in the scandal. I’m guessing that’s going to take a bunch of twists and turns!

I think I have one or two points to nitpick. One is that the tense sometimes changes. The other is simply that my own knowledge of the military will differ from yours, I’m certain (as mine is more contemporary). I think sargent-major is spelt “Sergeant-Major” (in English speaking countries) or “Sergent-Major” (in French)? Also, I think they’re supposed to be “non commissioned officers” (that’s what we call them in most Commonwealth countries, at least), putting them above the enlisted soldiers but not as high as commissioned officers. But you’d know more, depending on your research of course!

Very interesting so far, the descriptions are vivid, but it can also feel a little overwhelming. I feel like the two first pages are just the description of you walking. (Maybe it’s just me and I myself do that too

Is it intended to not have a timeline? Maybe the year at the beginning of the story would be nice.

Find a typo "Thank you, Sargent-Major. I think it’s “Sergent” if you want to go with the French spelling.

Also this one: Capitane: its Capitaine.

Keep on the good work, looking forward to see where this go.

I think your style is fine — I was only going to point out the verb tense inconsistencies that have already been mentioned (“It was only midmorning, but the heat is already unbearable.”, “invades your nose and throat, making you choke as it fills your lungs with every breath you draw. It was like sandpaper to any skin left uncovered by your clothes”).

Another thing that stuck out to me was this bit:

A strangely complex blend that hangs heavily everywhere, and manages to be at the same time refreshingly pleasant and oppressively unpleasant.

I see what you’re going for there, but something about pleasant and unpleasant doesn’t quite work for me

— perhaps you could leave it as, simply, “refreshing and oppressive”?

So, yeah, other than some nitpicking I don’t see anything seriously wrong. I don’t even mind that the descriptions are more on the dense side, myself, though I did take notice of it while reading.

I’d also say to check that do not have an extra space after or inside your variables, as I think I saw this more that once where there was a space between a name and a period. I only managed to screencap one of those, though, sorry:

Sorry, but that’s a major faux pas when you’re in the Legion. These are people running away from their spotty pasts - they do not want to be asked what their story is. If they do tell without being asked, it’s likely going to be an unbelievable yarn.
I also want to show the progression, starting from the PC’s background as a naive high-born man, to competent legionnaire.

Is it intended to not have a timeline? Maybe the year at the beginning of the story would be nice.

The year is supposed to be vague, set sometime between around 1880 and 1910. Just to make it easier on me.

intro is slow and telling

it can also feel a little overwhelming

descriptions are more on the dense side

That’s the point of the intro, and looks like it carries. Everything is unfamiliar, the climate sucks, and it’s stressing you out. Not to mention all the other stress already going on - leaving your family, enlisting for five years…
It’s also supposed to be a bit of a nod to P. C. Wren’s slow, descriptive writing style.

Oops. I really should have double-checked those French rank spellings…
The first time the PC saw the uniform stripes, they assumed wrong. I guess that didn’t convey.

Looks like I didn’t catch all of them when proofreading the first time. Time to proofread again.

They don’t, which is confusing me as to why the extra space is happening. I’ll go over it again and ask here if I still can’t figure it out.

Heh, I’d forgotten that was his name. I just went and picked some common names for each country. Not so generic that they’re “John Doe”, I hope, but the PC wants a name that doesn’t stand out either.

Cool, if that is the style you want, you are certainly doing it great. I think you will make a very interesting story. I am Spanish so If you need help with that pm me.

Hi! I’m going to write a bit about what I’ve thought.

All in all, I didn’t mind the story’s more long and novelistic format. I think that’s because your writing flowed well from paragraph to paragraph, so I never felt my eyes leaning my eyes into other things and forgetting about the game. The longer paragraphs between choices also helped create a very firm idea of the town where the MC joins the Legion, the heat in North Africa, the difference from the MC’s home setting, all important details, so that’s a plus.

One suggestion that I have would be to delve deeper into researching the French Foreign Legion and the time period. I can’t help but think that it would be very interesting if you could incorporate the minutiae of the French military and the peoples of North Africa into the game. Since it feels like your story is leaning more into the “historical realism school”, I think mixing the narrative with informative details about the time would be very welcome. It’s definitely something that I’m curious to know more of, at least.

I’d considered possibly having the PC enlist as a Spahi trooper instead if they are an indigenous local, but that’s another branch yet to be properly thought up of (hence the dummied out options).

It’s not meant to be historical historical, just more or less historical-ish plus what’s convenient for the plot (for example, Foreign Legion battalions are sent to many parts of the world, but for plot purposes, whatever battalion PC is assigned to is always in Algeria). Not alt-history, but I’m definitely taking my liberties.

My research has been pretty minimal so far (reading the Beau Geste series, if that counts), but I’ll probably need to do more than later on that to flesh out the setting and routines, different people’s opinions, or what might make good gags (technically possible but improbable stuff).

Some of y’all saw this but I wasn’t hoping to get some criticism about my writing. If you can spare a bit of your time to read it and criticize I’ll be grateful

I posted this a couple of days ago on the video game thread but this is a template for a gamebook system for Skyrim, adapted from the Critical IF gamebook series. 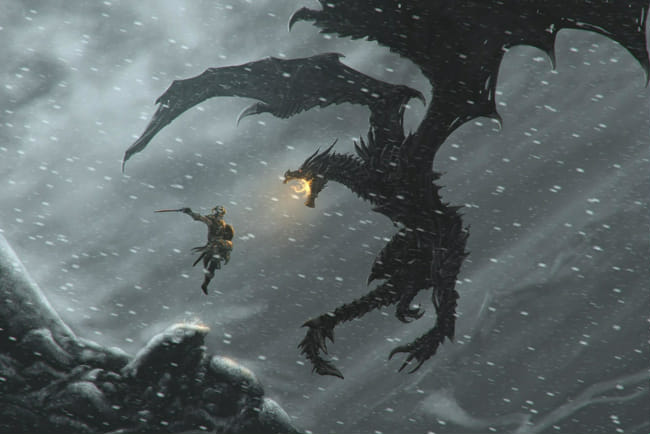 A template for a Elder Scrolls Skyrim gamebook system, based on the Critical IF gamebooks by Dave Morris. Might lead to a full gamebook in the future!

Still not sure if I will try and create a sample adventure for this to see if it works, or maybe do something similar for other fandoms (Star Wars or Fallout probably).

Interesting premise, you really did well on the action and intrigue. Just some little stuff see below.

Thank you, I’ll get to work on the editing.