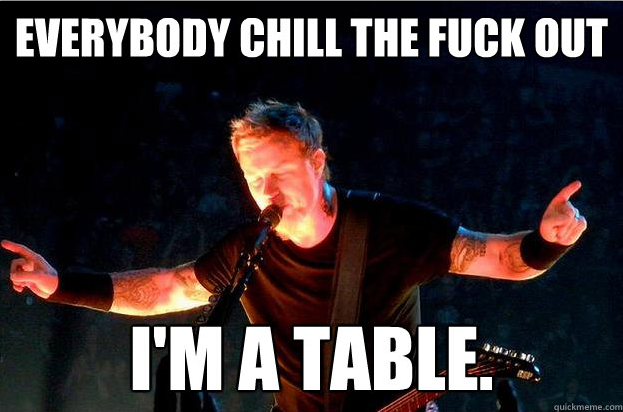 Now that I am a table I am completely out of any suspicion, mwahahah, my evil deeds can now be done… UNDER COVER !

…That’s what you get for that pun.

If you don’t stop with the puns I’m going to place you in a sleazy bar with a knife and a note daring people to do the thing where they stab the space between their fingers.

If you don’t stop with the puns I’m going to place you in a sleazy bar with a knife and a note daring people to do the thing where they stab the space between their fingers.

That depends. When was the last time a table drank beer? Spill it!

The pun is strong in this one. Join me and together we shall reign upon the dark side of the pun.
(I should think about recruting prof_chaos and Taylor. They are strong pun lords too.)

T’is a tempting offer. I have witnessed themy perform the craft of punnery. It would be an honor to pun alongside you all.

But I must say we will definitely either need cookies or some other delectable offering to lure… I mean tempt… I mean invite others to the cause.

Demo is out everyone! Here is a representation of me trying to write and code (I can’t write second person ahaha)

Also: good lord what an exploding thread. Lol I’m just watching the fireworks. I am the Deadpool in this Civil War.

I want to be Iron Man! Filth rich and always drunk!

That was worth the wait 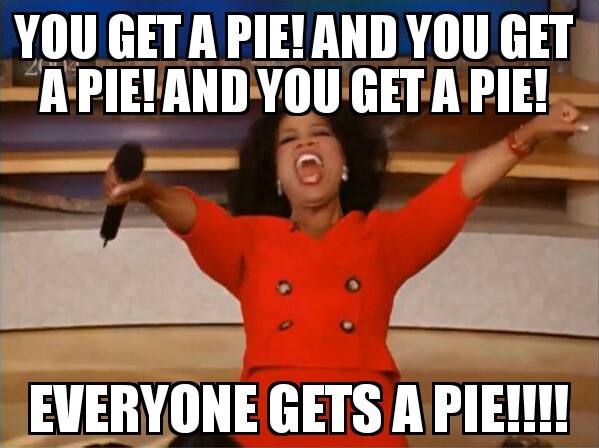 Well I played the Demo, it was great @Ledalla!
Glad the Ohohohs made it in there, and some Fufufufs too.

when Alia and her fellow maid Louise had to pin you down and make you drink it because you stubbornly refused.

Also glad this was mention whether it’s was from my silly suggestion thing or not.

I love it it great so far, how the waiting game for more shall begin

P.s seeing the word cherry reminded me of this song

Your writing style is nice, and it was fun to read.

I love that show by the way. (referring to the gif you used)

You can’t. I think it has been established that I’m Stark in this little scenario.