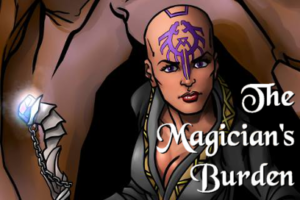 You are a magician living a fairly normal life in a small village outside of the Kingdom of Githrad. Deal with bullies, navigate your father’s temper and alcoholism, and work at your various jobs. As well as being a clerk at your parents’ general store, you can also choose between being a guard, a scribe, a farmer, or a thief. It’s 40% off until August 23rd!

You get to have fun, too, like playing in chess tournaments, sparring, reading at the library, exploring necromancer’s caves, exploring the woods, and finding romance with the other villagers.

The Magician’s Burden is a 225,000 word interactive fantasy novel by Samuel Harrison Young, where your choices control the story. It’s entirely text-based—without graphics or sound effects—and fueled by the vast, unstoppable power of your imagination.

• Play as male, female, or non-binary; romance men, women, both, or no one at all
• Three different kinds of magic for you to choose from: stealth, light, or dark
• Dozens of stats detailing your skills, knowledge, attributes, relationships, and inventory

Samuel Harrison Young developed this game using ChoiceScript, a simple programming language for writing multiple-choice interactive novels like these. Writing games with ChoiceScript is easy and fun, even for authors with no programming experience. Write your own game and Hosted Games will publish it for you, giving you a share of the revenue your game produces.

I was really liked the first fallen hero and I was wondering if you could give an estement on the meet ones realise date?

I think this is not the correct thread for this and asking for release dates are against the forum rules.

Why did you ask that question on a thread about The Magician’s Burden?

Ya exactly it makes no sense.

The Magician’d Burden won’t show up in Host games ios app. What’s happend? It’s not release on ios yet? I want to buying it on my ipad.

It should be on there. Try uninstalling the omnibus app and downloading it again.

It showed up! Thank you!

Hm, I was quite happy with this purchase but it could have used an extra test playthrough or two. (But I understand that this isn’t always that easy, even games that were released with hundreds of test playthroughs had various bugs slip through the cracks)

Lots of minor capitalisation errors (sentences starting without a capital letter or a random word with a capital letter), and one time when a whole paragraph is bolded and probably only a single word should have been?

But that’s pretty minor, it is a bit annoying, but will hopefully be easy to fix (I’ll try to get exact chapters/sentences/paragraphs for those errors if necessary).

But when you choose to browse the clothier for an outfit you are given the option to review the choices first and then pick… Except that when I “review” an option that option is then removed as a choice for me to pick. So instead of getting my preferred clothes I had to live with the last available one (the poor option). That kinda hurts my enthusiasm a bit, not sure whether I should press on regardless or just restart and fix some of my old choices while I’m at it…

But overall, I like it quite a bit. Haven’t gotten to the ending yet, due to the clothes bug.

Thanks for the feedback.

I’ve identified a lot of the incorrect capitilizations that happened because of “search and replace” gone wrong. I’ll look into that clothing bug and submit an update CoG tonight. It’ll include some other minor bug and typo fixes.

Awesome, thank you for listening. I look forward to doing more playthroughs and everything. The ending was good.

I also really like the way that you are told exactly which stat is affected by the choice and also how (almost) every choice moves the stat just one or two steps, and also how every choice affects at least one stat in some way. Some people probably think the stat increase messages break immersion, but I like keeping track of stats so I’m happy with it.

Yeah, there are likely some people who don’t like it but it seems to me that most of my readers appreciate it like you do.

I like it because it gives the reader instant gratification and doesn’t make what’s going on behind the scenes a complete mystery.

I just started playing, and I’m having really fun with the demon, Like fake a heart attack when Violet scares you in the cave and others mischiefs and I was wondering if Zaleth is a RO? I don’t usually like the “bad boy RO”, but I love the “Lokish RO”.
Anyway, I’m excited for this book, and you others WIP like M.M.M!

All I’ll say is that he isn’t an RO in this volume.

Btw, could a moderator please close this thread and leave a link to the other TMB thread so the conversations about the game won’t be split between multiple threads? Here’s the original thread: The Magician's Burden [230k words] [Published] - #661 by Samuel_H_Young @JimD @Havenstone

I just started, and boy is the protagonist a whiny doormat. It is no wonder everyone shits on them.

I hope as we progress we can build their confidence up.

how do I lose or gain relationship points from doing things these people couldnt have possibly known you did?

Because your relationship meter with characters obviously has something to do with your own opinion and views of them, too.

That makes sense to me. Actions you take, even in private, can shape your personality or attitude in ways that might affect characters later on when you do interact with them.

I’m guessing he was just polite enough to tell me if I take his deal that’s what happens?

But lets say I am being underhanded and deceptive, I won’t meet a relationship check because of my own opinion of that person? Despite my interactions with them being nothing but positive?