New Hosted Game! "Keeper of the Sun and Moon" by Brynn Chernosky 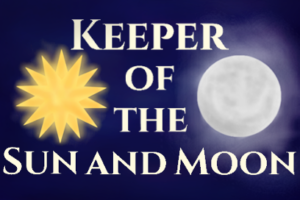 No one mentioned saving the world at freshman orientation, but you still can’t decide if the worst part of college is the essays or the demons. It’s 25% off until January 31th!

Keeper of the Sun and Moon is a 310,000 word interactive fantasy novel by Brynn Chernosky, where your choices control the story. It’s entirely text-based—without graphics or sound effects—and fueled by the vast, unstoppable power of your imagination.

You knew your school year was off to a rocky start when you were attacked by a gorgon. Whisked away to New World Magi Academy, you’re thrown into life at a college for supernatural in the midst of unprecedented turmoil in the city. There’s a war brewing between angels and demons in New Magi City—and the theft of the powerful celestial artifacts does nothing to abate tensions…

• Play as male, female, or non-binary; gay, straight, bi, or asexual.
• Romance one of ten love interests, from a cute shifter to a snarky telepath.
• Experience life as one of seven unique species as you learn to control your powers.
• Choose your classes for each semester, from Telekinesis to Sigils and Runes.
• Discover the secrets of New Magi City, and become involved in the intrigue yourself.
• Delve into a forgotten mystery to uncover the secrets of the Dragon Massacre.
• Stop the artifact thief from taking control of the city, or aid them along the way.

Brynn Chernosky developed this game using ChoiceScript, a simple programming language for writing multiple-choice interactive novels like these. Writing games with ChoiceScript is easy and fun, even for authors with no programming experience. Write your own game and Hosted Games will publish it for you, giving you a share of the revenue your game produces.

one of the best hosted games

Really liked playing the beta, once I saw the release date . I went it in the app store, bought it immediately.

I didn’t find it in the hosted game app

And I’m talking about iOS not android

Strange, I see it. Maybe refresh the app?

I’m not seeing it in the Google Play store. I searched for game title and “Hosted Games LLC”. sadface

I had to purchase from the play store link on the website. I would recommend waiting a bit till like next day, as I had to fix the purchase.

Here is the link to the webpage

is there a reason why this game isnt on steam? Man…thats where I buy my games…

" All our times have come
Here but now they’re gone
Seasons don’t fear the reaper
Nor do the wind, the sun or the rain
We can be like they are
Come on baby… Don’t fear the Reaper…" (In memoriam for all the Steam Players who wanted to play this game myself included)

I’ve found a few mistakes, but I’m busy doing my first playthrough. I’ll recreate them soon and post them here so you can fix them

Ready to dive in!

I’m still not done with the first playthrough, but there seems to be a bug that makes the game think there is always at least one unread message even after all of them have been checked.

Hosted Games doesn"t usually release on Steam , only selective few will be released there…

True, but we still miss out on some great games that we would like to play also thanks for reminding us of our pain. (I do appreciate the games we do get but, I do think we have been missing out on some the really cool new ones)

We couldn’t do much of the company decision…
There were of course many other different games that each individual think should be on steam , it is most unfortunate of course…

The demo was fantastic. It’s unfortunate that there is no steam release, but nevertheless, best of luck to the author! I hope this game succeeds.