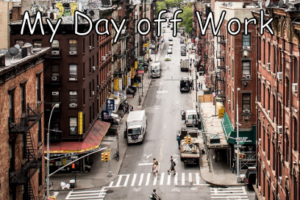 Your alarm goes off and you have a momentous decision to make – get up, or stay in bed? It’s your first big choice but far from your last.

My Day off Work is a 240,000 word interactive fantasy novel by Andrew J. Schaefer, where your choices control the story. It’s entirely text-based—without graphics or sound effects—and fueled by the vast, unstoppable power of your imagination.

You’ll have 24 hours to explore your world and the myriad treasures within it. Every decision opens new doors and closes others; every choice you make takes you to a new fork in the path. You might meet new friends, explore hidden rooms, or discover secret treasures. You could find yourself fighting a relentless killing machine, joyriding in a luxury sports car, or relaxing in a sleek lounge with the city’s movers and shakers while soothing the baby you’ve just agreed to watch.

No two games are any more similar than you want them to be. Compelling plotlines and funny asides keep things relentlessly entertaining. You might even learn a few things, but only if you want to.

It’s all your choice. Is that a light at the end of the tunnel? And is it the sun? Or an oncoming train?

• Enjoy your surprise day off work.
• Tackle tough choices like whether to get dressed, what to eat, and when to leave the house.
• Explore the myriad paths a bustling city has to offer.
• Look for hidden options, secret choices, and unexpected twists.
• Experience a different story every time, from tragic to provocative to hilarious.

Andrew J. Schaefer developed this game using ChoiceScript, a simple programming language for writing multiple-choice interactive novels like these. Writing games with ChoiceScript is easy and fun, even for authors with no programming experience. Write your own game and Hosted Games will publish it for you, giving you a share of the revenue your game produces.

Anyone else played yet? My first game, I went down to the beach, did a bunch of drugs, and died.

This is probably why my boss is reluctant to approve my PTO.

Did Lots of playthroughs but probably best one was waking in a submarine where only the people of submarine were last humans because some virus had hit the ground and wiped out the mankind.

Hadn’t heard of this, but it sounds quite intriguing.

Kinda sounds like that game at Blips and Chitz on Rick and Morty. Roy, I think it was called.

One thing I really like about the game is that it doesn’t ask you to specify your gender, so you could visualize the character you play with your preferred gender.

I had thought about including a bit in my own WIP where someone played a Choice-type game inside the game. Looks like this one beat me to that, as that is what I did early in my playthrough. You know, before I randomly hooked up with a dog walker and became Sarah Connor.

…reading the replies it seems like this is the game I was thinking of!

I saw the yp thread close with little news(that I can remember anyhoo), and was so really disappointed, used to play the yp like mad. Then I just saw it on the upcoming hosted games thread, but didn’t want to get my hopes up that it was the same game I was thinking of, and now it’s released and is that yp I loved all that time ago. I am so excited now it’s crazy

. Also when I played they yp my favourite bit was the funniest way to react in the Sarah Conner scene(you know the one) or that old lady’s reaction to you being nude

It’s an interesting piece… I played a couple of times… first time I just kept pressing snooze and going back to game. It was a short game, but I found quite interesting the fact that somebody has coded something like this!

:’( can’t play it on my android phone, nor can I buy the full version. Some games work better than other for some reason, but specific to this game. I’m visually impared and use google talkback, tried updating to the latest android version-7.1.1, but didn’t fix the issue. Tried turning talkback off too, but even with talkback off I can’t press the buttons in the app, such as to upgrade, the next button, to select a choice etc. Just tried first hero’s rise game to test it and that is working fine.

. Just updated the app, update must have been made available since I downloaded it and the problem is fixed

. Just take note fellow visually impared people to update your app, otherwise it might not work

This is a great game. I’m glad you got it published into a full feature game. Now is there any hint as to where I can find the code to the modernist building with the blue door and the keypad? Much thanks!

…I have no idea what you’re talking about despite the fact I’ve played this game probably 20 times or so(admittedly a lot of those I just skipped ahead to try and get new content but still), and I still can’t work out how to get a vip pass or work out how to choose the Ferrari option,nor can I work out the mystery of the museum, just goes to show how replayable and large this game is

, I can only imagine what other paths I still don’t know about.

This is the first HG title to release since I started posting here and I must ask…is this the usual reception? It seems pretty frosty. Few comments on here, a scant two reviews on iOS (one of which was mine), and no presence in the top 200 of the RPG games. I realize there are some X factors like its unique structure, lack of stats and odd pricing. And not much way to know how much or little the author is promoting it himself. But still, seems less than expected. Even if they can’t all be CCH or Lost Heir level attention-getters.

how to choose the Ferrari

, and remembered I don’t know how to choose the poster option at the beach either

I played it and found it a nice game, if unorthodox. However, the subject of the game isn’t quite a “fan favourite” (as in, typically the preferred themes tend to be zombies, superheroes, fantasy, pirates, etc). So, I’m not terribly surprised that its getting off to a slow start (don’t get me wrong, I think it is great that people make different games, but it is slightly harder for it to reach a wide audience… but give it some time, and we’ll see what happens… as an author I’m actually following what is happening to this game and others, to try to understand better what people want from interactive fiction)

I wouldn’t say it’s frosty at all for a HG. (Take a look at some that have been ripped into and you’ll see what I mean). Even games that have been well received in the stores get variable amounts of attention on the forum depending on a lot of factors. Games like LH and CCH are more the exception rather than the rule with the amount of attention/feedback they receive.

If it’s slow to get going, in my mind it has two things “against” it. (Note the " "). Although I’ve only had a chance to read one of the stories so far, it sounds like many are on the short side. The curse of the widely branching games, people will complain. In saying that it hasn’t got pages of one star reviews over it so it’s ahead on the game on that count. (On the apple store it’s got 2 five* reviews! Apple store always has less reviews than android, quite a few HG’s seem to only have a couple of comments visible.)

Secondly it’s not a “popular” genera. You might have heard the odd jokes made around the forum about writing a story about a superhero, zombie, pirate, wizard to get attention, but it’s true none the less

The traffic will either pick up or it won’t, it can be hard to tell. But I think it’s free to play? May find that makes the difference.

Edit: Just realised adrao beat me to it about the zombie pirate thing

But yes, fully agree with what you say…

Yeah, there are like MULTIPLE other paths… like taking a ride in a submarine, help out people saving the elephants, get your right hand controlled by some other person, reply you know a certain a clown man and get yourself teleport to another planet, catch the wrong train to arrive at the airport and MORE. This particular option I’m looking for happened when:
“You’re uptown.
You also check the time.
It’s 11pm.
Just wander and see what I see
You notice a sleek, modernist building along your path. It’s all glass and steel except for a wooden blue door off to one side. A keypad is embedded into the wall next to the door.
Above the keypad there’s a sign that says, in simple black letters, “Input Code.””

So that’s how I got to the building but I don’t know about how to obtain the code to enter it.
So if anyone knows plz help!

Zombies, pirates, wizards and superheroes. And me 29,000 words into a science-fiction tale. Didn’t think that one through, did I?