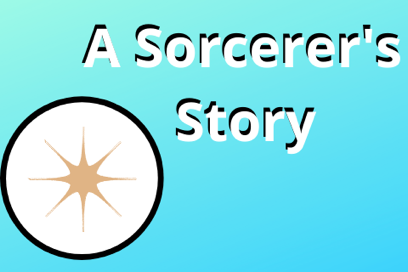 Take control of a sorcerer in an urban fantasy adventure that adds magic to the present day. Use your magic to fight against an evil sorcerer who is breaking several treaties by using his magic in order to gain world domination. Feel the rush of magic flowing through you as you fight against armed guards and other sorcerers as you break through from your humble private life in an attempt to save the world from your evil rival.

A Sorcerer’s Story is a 54,000 word interactive novel created by Chris Viola where your choices control the story. It’s entirely text-based, without graphics or sound effects, and fueled by the vast, unstoppable power of your imagination.

Will you save the world, die trying, or join up with the villain to gain a share of the pie? Along the way, you will get the chance to:

Chris Viola developed this game using ChoiceScript, a simple programming language for writing multiple-choice interactive novels like these. Writing games with ChoiceScript is easy and fun, even for authors with no programming experience. Write your own game and Hosted Games will publish it for you, giving you a share of the revenue your game produces.
11 Likes
Taylor_Enean September 3, 2020, 4:57pm #2

Link seems broken, asks for login details to CoG itself…

Edited to say: ‘All fixed!’

Ah! This is one I instantly wanted to try, too, haha!

Im excited to play the game

I’m so excited to play the game

. It looks super interesting but there seems to be a problem with the link.

Oh damn congratulations on the release…

Oho, this one looks fun!

I’m a huge fan of urban fantasy so I’m currently playing the demo. If I can offer some completely unsolicited advice, the amount of typos and misspellings in the first couple of chapters makes me more reluctant to pay for the full version. I don’t know how easy edits are to do after publishing, but you may want to take a quick pass over it.

“Hard work can improve your skill are something.” *at

"These invaders have military training, running in with assault rilfes, " *rifles

I’m not trying to be harsh, and I’m more than willing to go through and pick out the ones I see if it would help and send them to you in a private message, I just think you will see better feedback if these were fixed.

So no romance in this book?

It’s two dollars. EDIT: Like I totally get wanting longer games, but I think the price is fair given that this is shorter than most Hosted Games.

I know that the trend is for CSG’s to be longer and longer (something that makes me sad as I like short stories for variety personally) but for comparison, a 30-50k book would generally considered a novella and a 50k+ word book a novel (although many genres average higher than this for novels.) Weirdly (or perhaps not so weirdly) enough, traditional book publishing is the opposite of this model. First time authors would have a lot of trouble getting really long works published and selling successfully but that’s another story.)

Examples of famous short books that could tell their story while keeping it in novella territory (just to prove good stories don’t have to be long): Wizard of Oz (40k), Hitchhikers guide (46k), Fight club (50k), Fahrenheit 431 (46k), The lion, the witch and the wardrobe (38k), The time machine (32k), Charlie and the chocolate factory (30k).

Anyway, enough digressing. The thing is, this author has written the equivalent of a long novella/short novel which most people would expect to pay at least $2 for if sold via the same stores but as a book (like google play/amazon etc, even from an indi author). CSG’s are often undervalued because the branching causes the playthrough length (aka the length of the novel you see on a single round) to be considerably shorter so unless you replay, it can feel like you’ve only been given a book half the length of what was advertised. It still doesn’t change the fact that the author has still put in a novella’s worth of work however.

Not having a dig at you at all @Colshot, so please don’t take it that way, you’re certainly not alone in this opinion that short games should be free

. Just explaining where the price points are coming from as the “freemium” game market has had a negative influence on “value” of game sales in general (not just CYOA games.)

To play devil’s advocate, since this is the total word length, it is still going to be a lot shorter than Fight Club or HGttG in a read through, since you will only see some unknown percentage of the words here in one go. Certainly we have seen some worse prices on shorter stories of late, but at the same time, I think the way things go now is that anything under 75k needs to think long and hard about either beefing up, wading into the $.99 pool (assuming that management would even allow that, which is by no means guaranteed) or just embrace freemium. There is not the same tolerance there used to be for paid stories under 100k.

To play devil’s advocate, since this is the total word length, it is still going to be a lot shorter than Fight Club or HGttG in a read through, since you will only see some unknown percentage of the words here in one go

Yah, though it’s quite possibly in the realms of the lower word ranged books like the time machine (by Wells) and Charlie and the chocolate factory (Dahl I think), The old man and the sea (Hemmingway), Animal farm (Orwell) etc.

Anyways, not saying short= good, long= bad because we all know that’s not true, it’s just the length of a story is not always a good indicator of its quality. I’d rather read a well paced, punchy short story, than the same story that’s been dragged out to twice that length with overly wordy sequences and pointless asides that don’t add much to the experience (and may well be detrimental.) I guess I was told over and over again in high school where I started learning to write to keep things tightly edited and always ask if something is actually contributing in a really meaningful way to the story. If not, take the red pen out and start deleting. (Or if I didn’t do it, I’d get pages covered in red ink back from the teacher.) From a traditional publishing standpoint that was good advice. From the standpoint of a genre where games do get prejudged on their wordcount, it doesn’t work so well.

the way things go now is that anything under 75k needs to think long and hard about either beefing up, wading into the $.99 pool (assuming that management would even allow that, which is by no means guaranteed) or just embrace freemium.

Funny you should say that. I am likely to request that one of my very short WIP’s (Raishall) be released as freemium or very cheap if HG is ok with doing that. It’ll be under 50k and games under 50k seem to be prone to getting a lot of hate if they’re not “free”. (Insert small rant about personal dislike of many freemiun tactics like lintrusive ads and timers here but I gotta move with the times

) Thing is, COG also has to pay their staff, site costs etc, so running games that make very little (like ad supported ones) has to be taken into account. A few free games build good will, but I can see why they want to have paid games out there. (CSG’s do not make the sorts of money people think they do from ads!) It’s also an incentive for authors here to write something for publishing rather than stuff I sketch down for personal enjoyment that I may never bother to edit properly (or even show anyone else.)

Anyways, from someone who hangs out on sites where shorter games happen successfully (like sub-q, IFComp and many of the game jams around) I guess it kind of makes me sad to see that they get discounted on length alone. A long game isn’t necessarily better (or even greater value for money) if it’s not as well written/enjoyable as a shorter one.

Anyways, sorry for the topic derail! If anyone wants to talk at length about length further, I can make up a topic for it