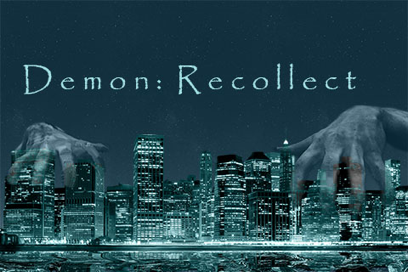 Become the villain who will save the world! Awaken from your slumber and get thrown into the world of 2100. As you recollect your memories–together with a sentient sarcastic sword–you will battle heroes and don the mask of a villain. But will you succumb to the Demon within, or unleash your ancient wrath?

Demon: Recollect is an 186,000-word interactive novel by B’athala. It’s entirely text-based, without graphics or sound effects, and fueled by the vast, unstoppable power of your imagination.

As a villain on the loose in an unfamiliar world, will you liberate humanity from the ones who are pulling the strings, or seize the throne for yourself? Will you rule the underworld, conquer the city, or bring the status quo to its knees?

Don your mask and swing your blade! It’s time to unleash your ancient rage upon the world.

Let your mask be the symbol of a true villain!

B'athala developed this game using ChoiceScript, a simple programming language for writing multiple-choice interactive novels like these. Writing games with ChoiceScript is easy and fun, even for authors with no programming experience. Write your own game and Hosted Games will publish it for you, giving you a share of the revenue your game produces.
105 Likes
Demon: Recollect (WIP) |Full Demo|
whitebear October 1, 2020, 3:59pm #2

I think we can all agree that 2020 sucks a little bit less because of the release of this game. Congratulations @Bathala ! And what a great way to start October!

Congratulations to our wonderful Author!

Yes, yes, yes I’ve been waiting on this I had money to set back. I’m excited

YESSSSS!!! Time to get my Blur on…

Congratulations @Bathala for the release! Now if you don’t mind me, I’m going to “hang out” a bit with my favourite stoic, alcoholic fire-user.

Congrats @Bathala haha its crazy how you had no clue what you were doing when you started wip and now we have this awesome official release , 1st wip i followed from start till official release , i hope this game will gets lots of support.
P.S people dont forget to leave a good review on steam/playstore/appstore

HOLY DEVILS…! Congratulations @Bathala…lol almost everyone has been waiting for this for a LONG time…

I’ve loved the wip and I didn’t hesitate in buying it (I’ve been checking in all day for it infact), but I’m shocked at how incomplete the game is? There are still many continuity errors (ex. MC not knowing Greed in the crime lord path and vice versa when they already had sex even), blatantly unedited parts (ex. “Fade to black, for now”), and some typos. I hope we’re going to get a patch because this still looks like an unbeta’d alpha stage game.

Hope it gets there one day soon…

Congrats, Bathala! Can’t believe you started writing this back in 2008, feels just like a couple of months ago.

…as I’m a newcomer I didn’t heard of this but the premise look interesting. Congrats on the release then and let’s keep it rolling

Congratulations for the release and I’m very excited to read this.