Stronghold: A Hero’s Fate — Defend your people from invading monsters! 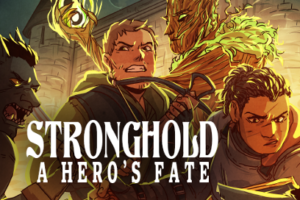 We’re proud to announce that Stronghold: A Hero’s Fate, the latest in our popular “Choice of Games” line of multiple-choice interactive-fiction games, is now available for Steam, Android, and on iOS in the Choice of Games Omnibus app. It’s 33% off until November 23rd!

Defend your stronghold from invading monsters and lead your people to glory! Rule your territory, punish your enemies, and build your legacy in an epic fantasy tale that spans decades.

Stronghold: A Hero’s Fate is a 250,000-word interactive fantasy novel by Amy Griswold and Jo Graham, where your choices control the story. It’s entirely text-based—without graphics or sound effects—and fueled by the vast, unstoppable power of your imagination.

Monsters have plagued your valley for as long as you can remember. But if anyone can destroy them, it’s you: you’ve already killed a powerful undead lich, and your sovereign was so impressed that he gave you a town in return. As the ruler of this new settlement, you’ll fend off invading goblin armies, flesh-eating bats, and feuding warriors in your quest to build a thriving community.

Now that you have your own stronghold, will you raise an army to repel the monsters once and for all? Or will you hold power for a lifetime without ever attacking another soul? Harness your strength, cunning, and even magic to defend your citadel and help your people prosper.

Invest in trade, mining, or farming—but choose your favorites wisely. Show mercy and forgiveness to your enemies, or be bold and aggressive as you expand your realm. Will the burden of governance make you serious and solemn, or will you retain your sense of humor and win fans near and far? Which groups will you please, when you can’t ever please everyone? And when the end draws near, will you be respected, forgotten, or reviled?

Will you triumph as a great leader, or see your stronghold fall?

• Play as male, female, or non-binary, gay or straight.
• Enjoy an epic fantasy of adventure, friendship, and city-building.
• Lead your people as a bold warrior, clever diplomat, or fledgling sorcerer.
• Defeat a goblin army or make peace with your people’s oldest enemies.
• Rule on blood feuds between your townspeople, or just judge the best pickles at the harvest fair.
• Court a spouse (or two), or found a new family with a sworn sibling.
• Select an heir to continue your legacy.

We hope you enjoy playing Stronghold: A Hero’s Fate. We encourage you to tell your friends about it, and recommend the game on Facebook, Twitter, Tumblr, and other sites. Don’t forget: our initial download rate determines our ranking on the App Store. The more times you download in the first week, the better our games will rank.

I really hope ya’ll enjoy this one. The authors are wonderful writers and I was so pleased to work on this project.

I have not read all But just the first chapter alone is a love homage to The old choice of adventures book’s.

I returned to have 7 years in the library of my school discovering my first Red cover Of those adventure books. Just for that nostalgia factor for me is a totally must have. Is old school If with all letters including the mythical go left of right in a dark dungeon and lost in there. …

Later probably I will gave a more focused review with more objective data… But for me The writing and the nostalgia made this a 10/10.

I’m over the moon that this has come out, I love D&D and with these writers I’m certain it’ll be great from the demo section that I played!

I just finished my first play-through, and I really, really loved it. It reminded me of Alter-Ego in a way, because every choice I made felt like a significant fork in the road rather than a different path that would take me to the same destination. Initially, my priority was building a strong defense, but there were just so many other paths that seemed like they could’ve worked, including diplomacy.

Also, so many of the choices were practical decisions rather than value-based decisions–“do I build a temple or a wall?” instead of “am I playing a Paragon or a Renegade?” In the latter type of game, I always make the moral and ethical choices that feel best to me, which leaves me with no real motivation to replay the game; why would I if I’d already made the decisions I felt best about? But in Stronghold, I’m genuinely interested in what might’ve happened if I’d met the Dryads earlier or if I’d tried to negotiate with the Goblins, or if I’d built a stronger economy. It’s tough to say for sure with just one completed play-through, but the replayability feels on par with Choice of Robots.

The only criticism I have is that the personal relationships didn’t feel especially well-developed? Each of the characters had their own personality, but the way the player character interacted with them felt a little distanced and rushed, like it was a box that needed to be checked off so the story could advance. Granted, that’s exactly what it was, but I would’ve enjoyed more opportunities to develop individual relationships outside the city-building sim part of the game, a few more involved scenes to cement a friendship, a romance, etc. Caring about the characters would’ve made me feel more invested in the outcome.

Still, I feel like this is going to be one of my favorite CoG and HG titles. I’ll know for sure after I play through a few more times!

Totally agree with @poison_mara and @HannahPS about the classic D&D feel of this one. I’ve been so excited to launch this game because I really hoped the fans would love how classic it is, but with a real COG feel to it in terms of options for ace and poly romances.

My only criticism is how romance are asked. I was asked if I wanted romance two people I haven’t even talked to them. And others I have just say two words one day. I don’t know if I like them. I have no idea their personalities yet at all. However I am already being FORCED by the town to choose someone. . … Like F*&ck off not your problem!.

The other is there is no choice to be a bard… I would have died to be a bard and play lute in the Inn … Lol If someday there is a IAP @Mary_Duffy I will pay for be a bard lol.

You’re going to really enjoy the Bard NPC in Tower Behind the Moon.

I am a bard of heart since 1994 Long live Arena and dungeons and dragons lol.

So probably a dumb question but I’m kinda confused. What is the difference between cunning and knowledge (in this game)?

Cunning measures your ability to set traps and trick or deceive people; knowledge measures what you’ve learned, including skill at crafts and your ability to read the language of the Old Ones.

I am definitely intrigued by this premise. Looks worth looking into.

I like Stronghold and bought it for my game collection …

Now i am eagerly waiting for Wyerwood :-)

THE BEST GAME EVER!!! I love it very very much!

This is soooo good so far, it feels like a quintessential cyoa game. Just a classic. Kudos to the writers, they did well.

Hello I do not know if you already asked but there will be a sequel?
I do not think it can be but I have hope

Even if there is a sequel it will not be the same MC i think, perhaps either the protege or son/daughter

Just me, or is it not on Google Play?