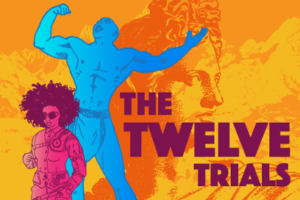 Face off against some of the greatest heroes of your age when you are called by the gods to participate in their twelve trials. Coming from humble origins, and hailing from a tiny farming village, you will have to prove yourself worthy of godhood. It’s 33% off until October 4th!

The Twelve Trials is a 160,000 word interactive fantasy novel by Douglas DiCicco, and won third place in The Choice of Games Contest for Interactive Novels. It’s entirely text-based—without graphics or sound effects—and fueled by the vast, unstoppable power of your imagination.

• Play as male, female, or non-binary.
• Defeat dragons and other monsters through brawn or wit.
• Romance a giant, a queen, a muse, and many others.
• Lead a revolution in an oppressed island.
• Find hope for starving villagers in a remote colony.

Complete the twelve trials, and become a god!

Douglas DiCicco developed this game using ChoiceScript, a simple programming language for writing multiple-choice interactive novels like these. Writing games with ChoiceScript is easy and fun, even for authors with no programming experience. Write your own game and Hosted Games will publish it for you, giving you a share of the revenue your game produces.

Pretty interesting game. Only criticism I’d make is that we end up pretty overwhelmed by all the character’s names all coming up at the same time - and since there are so many of them, most don’t get a lot in terms of characterization. Between eleven companions and twelve gods, it’s hard to keep track of who’s who at all time.

I played through the game a few times going for different results and the only problem was that you have 11 companions but you didn’t get to interact with them very much if at all, other than that the game was pretty good

Jessie seems to be a female’s name

Jessie is a name which works for both gender, but aside from that all names seem like male names to me.

I played with a male MC and those are the exact same names I got as choice.

Then I guess it’s a bug.

I know, I did that. It’s just that I like to look at the names offered by the game first bc if I manage to find a good one among those then I spare the time I spend with trying to come up with a good enough name (sometimes that’s the hardest part of the character creation for me).

Edit: Hope it’s okay to ask something like this, so I noticed that this game was cheaper than The Grim and I even tho the word count implies that this game is slightly longer. So how does this work? Until now I thought the price depends on the lenght of the game. Is the price something set by the author or the developer?

Same, I always have an idea of what I want my character to look like, but when I get to the naming part my brain is dead.

Currently thinking about buying this soon! Just wanted to ask though:

Who are the romance options? Are you able to choose their gender or is it set?

I’m most curious of this romance. How does this work out?

I went and checked the code: There’s only that set of names, no matter the gender:

No separate suggestions for different genders. Various games do that, but truth be told the choices her are a little… very masculine…

truth be told the choices her are a little… very masculine…

I agree, hence why I thought this must be a bug. Now I just wonder wether the gender-choice was just an afterthough…

Good question. The code has no pronoun variables, playing as trans gets no special variable, and the gender variable does not seem to come into play within the free chapters or the stats at all.

It was a good read although I found it to be pretty linear. Too many characters and too little time to actually get to know them so I ended up not giving a shit for any of them. The trials were interesting but not particularly challenging. I’d say it’s a 6 out of 10.

Nowadays, price is set by the game’s predicted success. That’s why The Magician’s Burden, at 230k, is sold for $5, whereas Heroes Rise, a 100k word story, is sold for $6, and The Harbinger’s Head and Life of a God are sold for $3, despite being 46k and 60k respectively.

So, for a Choice of Games game, the word count is the major factor.

For Hosted Games we take a number of factors in on more or less an equal measure:

When deciding the price of a Hosted Game, all of those are taken into account.