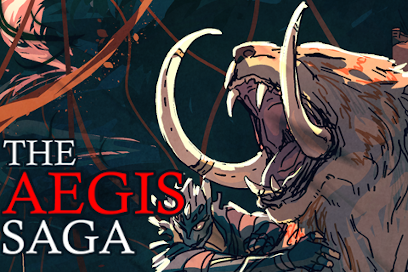 The blight eats the world while humans war for scraps. Will you fight, run, or lead your people to the stars? Or murderously ascend the human throne?

The blight eats the world while humans war for scraps. Will you fight, run, or lead your people to the stars? Or murderously ascend the human throne?

Two races clash; humans and turans–human discord versus turan magic. When the turans’ ancestors left the world to walk between stars, wild magic began returning. Now humans war to fill the vacuum, blind to the magical blight that is racing to smother the whole continent. High in their plateaus, the last turans must choose: Fight, follow their ancestors into the stars, or perish. And their fate rests on the life of a human child.

The Aegis Saga is a 280,000-word interactive fantasy novel by Charles Parkes, where your choices affect the story. It’s entirely text-based—without graphics or sound effects—and fueled by the vast, unstoppable power of your imagination.

Whether you try to understand the new world of the humans, or focus on the mysteries of the blight, either way, the child holds the key to everything.

Charles developed this game using ChoiceScript, a simple programming language for writing multiple-choice interactive novels like these. Writing games with ChoiceScript is easy and fun, even for authors with no programming experience. Write your own game and Hosted Games will publish it for you, giving you a share of the revenue your game produces.
34 Likes
Mary_Duffy April 2, 2020, 3:49pm #2

What a pleasant surprise. Being stuck at home has me so bored- I’m extremely excited to play this.

@Charles_Parkes congrats on the release!!

I think I need to say a big, big thank you to everyone who helped me out on The Aegis Saga… and especially all of you who were willing to give a first-time writer a chance
and we’re so generous with either your time or comments.

I’ve honestly never come across a better community and I’ve been lucky to have all of you!

Congrats @Charles_Parkes – I remember our initial talks about Eris …

I’m really enjoying this. Unfortunately I have to go back to work. So far Ive only managed chapter 2. But I really like the style. Thanks for the time an effort. Hopefully when I get off I can go back to ignoring the world and get further.

I love the game so far but I have found a coding issue while reading. Not sure if this is the place for it but I figured it’s important that the feedback goes somewhere.

@jasonstevanhill It’s way worse, there is only 1 choice at that point now and I am forced to go to the menu rather than continue on.

I have submitted the bug to that e-mail.

Thanks, looks like a bug not caught by any of our testing. Working on it right now. Thanks again for submitting.

So what can I do about the Error? I really want to read this

I’ve sent a patch to Hosted Games and they will upload shortly. It passes all my testing - but you guys are being invaluable in that you are picking up stuff that neither my testing, my beta testers, nor Hosted Games picked up. I appreciate how annoying hitting these has been, you are SO amazing for reporting these.

BTW I am turning off the skip reread function while I perform a longer bug fix - but I doubt you’ll miss it, it doesn’t affect the story.

@Hylum I can’t actually replicate your bug at this end, but have rewritten the code so you 1/ shouldn’t see that original debug message, and 2/ shouldn’t hit a wall with that menu only thing. I’m continuing testing over and over and keeping my eye out for more error reports in case this persists.

@Kxng this is not something I can fix at my end but Hosted Games are working on it right now - I hope they’ll update very shortly and I really appreciate your posting this - you may be feeling like a test subject, but you really are invaluable and we will definitely resolve this asap so you can read it. Thank you

Write to support. That’s an app issue, not a game issue.