I’m not sure if this should’ve gone in the dashingdon help page or not, but I’ll post here first just in case. So, I’m trying to update my game, and the update went through fine, and everything was dandy… until the new scene I put in caused a never ending loading screen at the end of part one of chapter 3. I’ve ran it through quicktest and did 1000 randomtests: it passed all of them. It even works when I play it manually in IDE and the web browser editor.

I tried playing it in a different browser and still no dice there either. I have no idea what could possibly be wrong with it. Someone please help.

Can you post a link to your demo on dashingdon and the name of the scene file + choice that triggers infinite loading?

The scenes that trigger it are the chapter3p1 and chapter3p1b, transitioning respectively into chapter3p2 and chapter3p2b via one of the four choices at the end of 3p1/3p1b.

Funny enough, I uploaded a version of it to my test build where I just put Elizabeth/Arthur’s scenario in a scene of its own, and that seemed to fix it for some weird reason. Out of curiosity and so people might be able to know in the future (and because I feel like this isn’t a real fix for whatever mystery issue is here) I can leave it as is until you’ve had a look at it if you like.

I look through the code and everything seems to be fine. I’m not sure what happens up to the point, but if you have any gosub_scenes that don’t get to “return”, they may stay on the memory stack and when you open a new scene, then there won’t be enough memory (just a wild guess tho).

Oh, nah, I don’t have any gosub scenes, I’ve never used one. I appreciate you taking a look though!

Update… it’s something in Sarah/Samuel’s coding, because their scene is the one not loading…

This is so damn exhausting… Issue isn’t fixed

EDIT: In the quicktest for the game, it is now say that it can’t open sarcomfort.txt 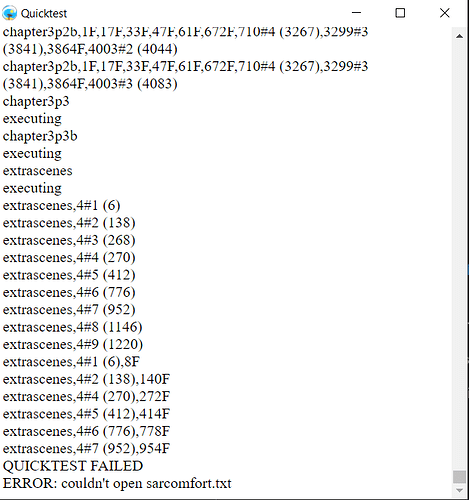 I don’t understand this because there is no such txt file. That’s a label. I’m really confused on what it’s trying to do. 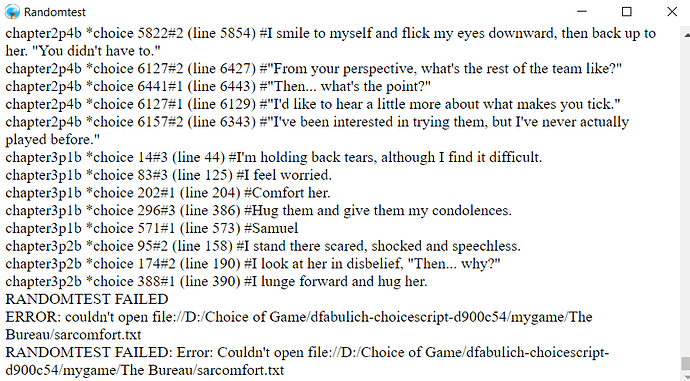 image894×494 88.8 KB
That’s what randomtest says. I followed that exact path on my computer. The file doesn’t exist and never has. It’s also not a scene in my scene list. I can’t work on this anymore tonight. This is infuriating and I’m not going to get anything done like this. That label has always been a label. There has never been a scene named that.
Zahr October 1, 2022, 6:54am #8

This might be a long shot, but try *ending instead of *finish in your very last scenes.

Just checking, did you use goto_scene instead of goto? That’s one possible reason it tried to look for a file that doesn’t exist/should be a label.

@Zahr The demo ends on the page after that one with a “Coming Soon” message, so that can’t be it.

Try replacing it with goto sarcomfort . If you use goto_scene sarcomfort, the game will assume that it’s a text file, not a label.

Yes, I meant those 2 “coming soon” files specifically. Changing *finish to *ending in them both might help in your case.

I just looked at the files on dashingdon, specifically the choice right before randomtest failed (#I lunge forward and hug her.) The choice is the same in both files, but the command at the end is different. Could this have something to do with the problem? I could be wrong though.

Another update though; I just added a sarcomfort scene to the game and scene list to give this thing what it was looking for and I can now choose sarah/samuel to go to again, but now when I choose Elizabeth/Arthur’s scene in dashingdon it takes me to two consecutive “Coming Soon” screens. Most likely both chapter3p3 and chapter3p3b.

Also, nah, I noticed that mistake while editing. The scene used to end there, but then I added more to it.

https://dashingdon.com/play/morbethgames/new-bureau-dev-build/mygame/
Here’s the dev build link I’ve been messing with

Hmm, very strange. In that case then I don’t know what could be causing the bug, sorry

but now when I choose Elizabeth/Arthur’s scene in dashingdon it takes me to two consecutive “Coming Soon” screens. Most likely both chapter3p3 and chapter3p3b.

I checked the file and it uses *ending, so it’s weird that it appeared twice. When I did a quick playthrough of the dev build, the screen said “Coming Soon”, I clicked Next, then it said Coming Soon again before giving me the play again choice.

I noticed the dev build has chapter3sar and chapter3sarb, but they are not listed in startup.

I had to combine my two workarounds. I had to add the sarcomfort empty scene into the game and the scene list, as well as split up the two interactions into two separate scenes. Somehow, in some way, that fixed whatever was plaguing my cursed game… I hope.

Your *label sarcomfort is on the same level of indentation as your *choice comand.

If you remove the indendation for the *label saracomfort line, will that fix your issue?

Edit: Ignore the comment above, I just noticed the indentation is needed because the label is inside an if statement

Also, I don’t think adding the empty scenes is the best fix, since you don’t intend to use them. You may encounter other strange bugs along the way

I’ll keep working on it. But probably not at the moment. It’s 4:30 in the morning and I’m just so over this at this point. I’ll fiddle around with it more later today and keep you updated

Ok, it seems wise to get some rest then, I’ll keep looking at this because I find this bug fascinating

Edit: I made a simplified test project with only the startup file, chapter3p2b, chatper3p3, and chapter3p3b files. The flow works fine, even without adding the empty workaround scene (sarcomfort).