“Another year, another November, because writing, writing never changes.”

I am creating this to be a safe place to speak with others trying to do a Nanowrimo goal. A way to encourage yourself and others, put cat memes about writers struggles and just vibe.

I will also do a Nanowrimo support discord to people interested on joining.

We can beat our Nanowrimo dragon

God, November can’t come fast enough! I’m writing a supernatural/horror story about a human girl. Camellia Winters, who falls in love with a yurei, Yuriko Kurokawa, she meets after moving into a haunted house. I’m hoping to write at least the daily par, 1667 words. Ideally I’d like to write 2000 words a day.

Yuriko’s husband, Cero, killed her and now he wants to marry Camellia. Though I’m worried about the age difference between them. Cero is 25 and Camellia is 17. Then again this is supposed to be a bad thing. Camellia doesn’t want to marry this weird stranger.

Sounds like a very thrilling story. Maybe with a sexy villain in between too?

Seconded. It’s a small difference to go from 17 to 18 storywise, but will be a lot better for you in how readers respond.

Another year, another NaNoWriMo… and another opportunity to totally fail

! I have three stories I want to write, two of which are IF, and I still have college classes to work on. I think I’m going to try to write an hour every day, I think that’s doable

That’s a good idea. A way to start an habit is trying to start always at same time getting used at it. Have a nice drink and in a place well lit. That will help you

You also could write here every day if you can feel it like an encouraging event.

Each word you write is a victory by itself. You can do it

This will be my first time trying Nanowrimo, and I don’t really expect to reach 50000 words at the end of the month (I am still going to try

), but I am struggling so hard to write anything for my current project that any amount of words would still be a win

I think one of common errors made by Nanowrimo is started with a heavy 50k as unique goal. Nowadays they let you made your own goal.

Because I think for many people 50k is just not possible that doesn’t make them failures.

I think you should and we all put our own personal goals. Mine is write a 35k story. If I do the 50k fine but 35k is a good goal for me.

I’m not even planning a “novel” so the “No” part is a bit inaccurate, but oh well. I did this same thing last year and it was really helpful for proving to myself that I can “stretch” past what I thought my daily limit of writing was. I’ve actually been able to manage around a NaNo number of words a couple more times this year, so that’s been really cool, too.

Anyway, enough about that. I’ll be using the month to try and hit a round 50k on Asphodel’s seventh chapter… which will hopefully finish it so I can finally move on to chapter eight.

…If I don’t get too distracted playing one of the three new video games I’m keen for in November haha.

It was as of writing this that it dawned on my that I have days to be ready for NaNoWriMo. I’m not ready…

I was not aware that 50k was no longer a set goal. I will still see what I can do. My normal goals are 4k words a week throughout the year. I will see if I can challenge myself this coming month.

Still is the official main goal but at least last year they had in the app set your own personal goals.

And anyway, I don’t need they gave me a sticker. The reality is that the true meaning of the Nanowrimo is challenging ourselves to do something about writing that is feasible for us but complicated to do. And then do it.

For me at least, It is same winner the person that finally achieved to finish a small game and be brave enough to show it, that the person who write 50k.

I’m not even planning a “novel” so the “No” part is a bit inaccurate, but oh well.

They say “novel” but you could write anything! A novel, a short story, a play, poetry… anything. What matters is that it’s at least 50,000 words. 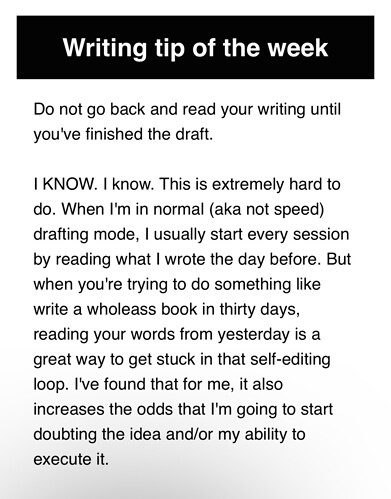 That is an actually great advice. First year I tried I re-read and ended up waste time rewriting so word account didn’t rise fast enough.

The editing should be following months bussiness not in Nanowrimo itself

Best of luck to everyone participating in Nanowrimo. I hope you can achieve your writing goals and gain something out of it, whether that’s experience, tricks of the trade, or simply the pure joy of the craft.

I like having a chance to motivate myself to practice creative writing. Not for projects or anything, it’s more about “Brain, how do I Words???”

Your brain can do words??

So! It’s November 1 where I am, and I’ve done my writing for the day. So far, so good, with 2,000 words to kick the count off. I spent a lot of yesterday making sure my code skeleton/outline for this was ready to go, so hopefully the writing itself will be smooth sailing from here (at least, as much as it can be).

How’s everyone else’s day one looking?

I have started, but the doubt paralyses me. I dont know if the intro works, It is raw, but if somebody can give me some feedback, I can found the way.