Coming Soon: Lasombra and Malkavian Clans in "Vampire: The Masquerade—Parliament of Knives"

I’m so excited for this! Malkavian and Lasombra are my two favorite VtM clans! Definitely a day one buy for me!

The worst thing is that every vampire cog I’ve played so far I’ve had a feeling like “dude, it looks like something’s missing here”
Then some time later and I see that they released a DLC and I understand why I felt that way.

2007 called and it wants your stereotypes of DLC as ‘cut content’ back.

Parliament of Knives was complete on release. The size of 6 novels. If that’s not enough content for you, then you’ll never be happy. I didn’t start writing this expansion until over 2 months post release. There is absolutely nothing in this upcoming content that was even considered for the base game, much less cut.

First, is Luca going to be clan locked to whatever clan you choose? As considering she rather dislikes the whole Lasombra thing, it’ll be a bit odd if she her self is lasombra, then again with all the stuff going on with them at I might actually make sense.

Yes, Lucca can be Lasombra. The amount of extra work I had to put into making that happen was… a lot…

Secondly, are we ever going to be able to use blood sorcery?

Sorry, that’s not in the update. Writing the Tremere part of this story would basically have to be a completely different game and simply wouldn’t work as an expansion or dlc.

You have my attention.

‘Yes, Lucca can be Lasombra. The amount of extra work I had to put into making that happen was… a lot…

I was wondering how Lasombra Lucca would work out (e.g. would she end up hating her own clan, once she’s done her religious research, and go fighting against them?).

‘Writing the Tremere part of this story would basically have to be a completely different game and simply wouldn’t work as an expansion or dlc.’

I think I saw somewhere that there would be extra time available with Trevor Haidt. Is that in the extended release? And will there be new Achievements?

Whatever the case, I am looking forward to seeing the new content. Thank you, Mr Dean!

And will there be new Achievements?

Ten of them, I think.

For the blood sorcery, I didn’t mean in this upcoming update, from what people have been saying there’s going to be more than enough content to keep me nice and happy for a while.
Although I was thinking more, like you said writing a warlocks option would be quite extensive, but I was thinking something along the lines of, you help the Termeer, and they teach you the basics of blood sorcery, or depending on how the new romance with civic turns out, there might be potential for her teaching you that nifty trick where you can rip that one guy‘s blood out of his throat. That would be cool.
Either way, that can all be discussed when, and if, you end up putting more content after this update in.

Speaking of the warlocks though, how do you get to find out about the little Civil War? I could never figure out how to do it. And I played the game like a dozen times for funzi’s.

‘Speaking of the warlocks though, how do you get to find out about the little Civil War? I could never figure out how to do it.’

If you mean the (Tremere civil war) ‘Take A Side’ achievement (or words to that effect), it took me several games to discover it. To do so, don’t make any political alliances with Vivian or Bouchard, avoid any romances, and don’t go down the full-Anarch route. This should unlock the storyline where, when your MC is returning home one night, he/she will be approached by Henrick Lang for help. He’ll want to go to your home to hide from Lily/Christine, who’ll in turn try to enter your home, to capture Lang. Think this is in Chapter 8.

If needing further help, look on youtube for the guy who plays through the game (Wretch plays), with a chapter-by-chapter breakdown. He unlocked this subplot. 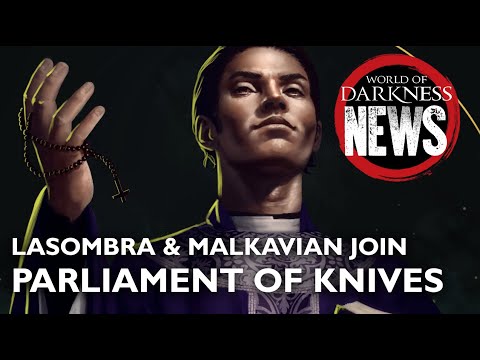 You beat me to it! I just saw it on YouTube I’m so happy

Just to confirm, this is a DLC, correct?
As in you have to get a hold of it, as opposed to the thing with out for blood where it is automatically updated?

I suspect that someone may have already asked this, but when is it going to be out

According to the announcement, September 22. There isn’t an exact time. If you live in the United States, it’s usually mid- to late morning.

Odd question but will new potential ghouls be added for the new clans?

If Gerard can handle Sewer Rats and Blue Bloods with equal aplomb, he’s probably more than adequate for Malkavians and Lasombra too.

Yay. Excited for the malkavian. My favorite clan

A little off topic for this specific conversation, but what generation are all the vampire NPC‘s in parliament of knives, and if you as a human have the opportunity to be sired by one, who would you pick and why?

I’ve never been able to play as a Mal Kavion before, so it should be interesting. Also yay, new romance options.

You can be Malkavian in Sins of the Sires.