It’s no easy thing to outrun the collapse of the world.

Welcome to the sequel (in progress) to Choice of Rebels: Uprising. Chapter One of Stormwright is now up, it’s free to playtest, and it’s more than 340,000 words long–over half the length of the original game!

Most recent update: Dec 23, 2022, posted first draft of Chapter One 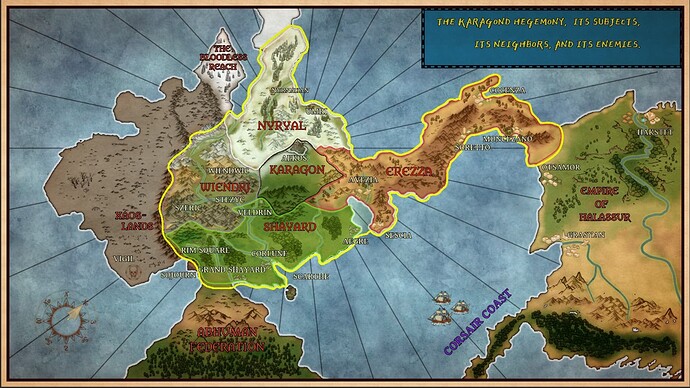 The first phase of your rebellion against the brutal Karagond Hegemony ended with you fleeing into the Xaos-lands, a nightmare wilderness wracked by storms of wild magic. Now continue the adventure, as you:

Chapter One is still very much in draft form–with a few parts that I don’t plan to complete until I’ve written the arcs of certain characters across the whole game–and I’m grateful for any thoughts you have on how I can improve it in either style or substance. Leave your feedback in the forum thread below!

Thanks as always to @dashingdon and his platforms for WIPs, including moody.ink, where by his generosity XoR2 will be hosted for free.

It’s here! Rejoice citizens of the Hegemony, for your savior is here!

Will we be able to transfer our safe from Book 1 or will you offer a predetermined path of choices or both?

Quite excited to see that answer you gave me weeks ago was not empty and the demo was truly on its way!

Since it doesn’t seem to have been brought up yet, what’s the approximate word count for an actual playthrough?

Will we be able to transfer our safe from Book 1

Not during playtesting. The game starts with a basic recap “flashback” section – though that of course won’t cover all the details of Book 1, so I’ve got an extra “For Playtesting” page as almost the first thing you see. It covers the elements of Uprising that affect Stormwright but in the final version will only be playable for people with saved games. (Or who edit the relevant stats.

Since it doesn’t seem to have been brought up yet, what’s the approximate word count for an actual playthrough?

My old laptop is choking on Randomtest, so I’ve not been able to get that quite yet…

Good enough for me, cannot wait to explore the demo.
It shows there is a huge amount of work behind it!

This is the best Christmas gift ever

Congrats on reaching this point, I know it was a goal for you. Looking forward to watching this story soar just as its predecessor did.

Alright, I just need to dive back into some mule wranglin’ to get into the mood and then Stormwright will be my Monday entertainment.

Congrats on this progress, good sir! 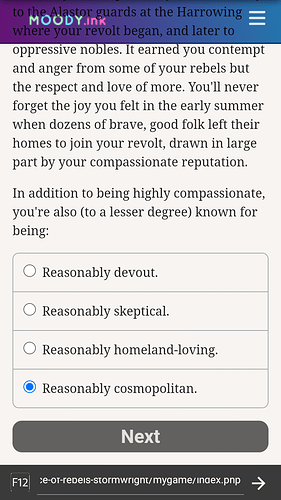 Are you getting an error message?

Yes on every of them 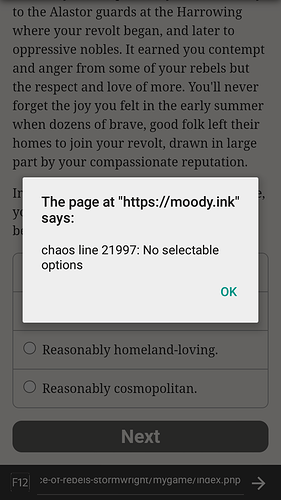 ”Cousins of yours?” The Xaos-storms should turn my tongue into a foot