Zombien has finally made it to release. Many thanks to everybody who helped to get it here. Please let me know about anything you would like to see to improve the story, but alas updates will have to be in bulk every time I am allowed to do so.

Several people have ground to a halt while trying to access the maintenance shed in chapter 6. I will make sure this section is made clearer in the next update, but for now the way to get through this section is to enter only numbers as the code guess. Any number between 0 - 999999 will allow the game to continue, but if you include letters or other symbols it will complain you left it blank and force you to stop.

Hi! I am new to this website, but I am a longtime player. I’ve recently bought your game Zombien on Google Chrome, however, when I try to add it to my Mac in order to play it says there is a server problem. I tested to make sure that it was not my Mac that was causing the issue and downloaded another app and it worked so it’s just not working with your game. I’m not sure if you know how to fix this, but I figured I should let you know! Thanks.

Hey Jasmine,
Sorry you are having problems playing it, but sadly I have no control over the servers. Hopefully @dfabulich or @jasonstevanhill know about any server problems and will fix it as soon as they can.

Okay sounds good. Thanks for the quick reply! Hope I can play your amazing game soon!!

It’s pretty good, but yeah could use a few more paragraphs and a spell check.

Now that Zombien has been released on all the platforms, I suggest closing your WIP thread so that all the new comments come here. That way it’s less scattered.

Hey folks.
Have already had multiple people complain they are having problems finding the app especially with the joy of the itunes rating system. So here are the direct links.

I would also like to take this opportunity to thank the many many people who have sent me congratulations on Zombien, and also the people who have given great reviews in various places. I am trying to personally thank everybody, but if I miss someone please don’t feel slighted it’s being overwhelmed by the quantity not that I don’t appreciate everything people have said.

Hey I am thoroughly enjoying the game but hit a snag. In the final chapter I am at a computer terminal. It gave me stuff like deploy workcamp, something else work camp, open maintenance door…I chose that and it wants an authorization code. But no matter what I put in…the app tells me not to leave it blank. What do I do?

Um, the story is supposed to continue regardless of what you enter there. The only possible problem I can see looking at the code is that it expects a number from 0 - 999999, are you putting in something different?

There we go. I wasn’t aware that the authorization code was numbers only. Since I don’t know what the code was I just typed in random letters with the hopes it would kick me out. I didn’t try all numbers. Might want to let the player know in an update lol. It worked and I can continue on. I have it for iOS so it just kept yelling, “Hey don’t keep it blank! Type something” or whatever. Thank you :))

Phew, thought I wasn’t going to make it one day without an emergency update. Thanks for letting me know the problem exists. I’ll make sure it gets sorted next update.

You actually got a 5 star review from me ( Zig Ziggenstein) on the app store. I just made it. There is a 4 star review that mentions the issue I had. So maybe when you release the update include it in the description so as to prevent lower reviews 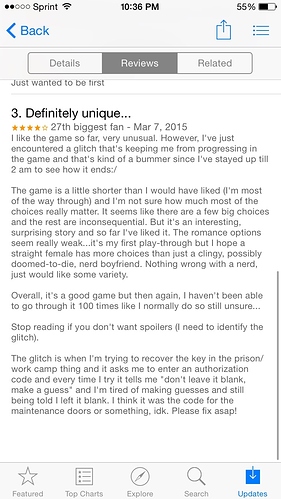 Thanks for the warning, it took me far longer than it should to realise I wasn’t seeing the problem because itunes is split up into different regions… Do you think adding in that the code has to be numbers will be enough? I wish I could add the basic solution to it so that people wouldn’t have to wait for an update.

Also thanks for the great review. Hopefully now if I type in zombien into the app store I will be in the top 100 search results…

It’s out everywhere except the choice of games website. My guess is they were waiting for apple, and apple didn’t release until after they had gone home for the weekend. But there are links to the various released versions in my post near the top of the page.

Could you tell me some places I could play it.

There are direct links a few posts up if you need them.

The first 3 chapters are free from most of the distributors, although sadly I can’t tell you when/if it will be coming to choice of games as releases are out of my hands.