I like the addition of the Ray character when you’re playing with delusions, but after that “dance” scene with him at the prom it’s kinda hard to believe that the rest of the group hasn’t put the MC in a straitjacket lol.

The only one to show any concern is Jamie, (during the first night on the hilltop) but he never brings it up again.

And if you introduce Ray to your nephew, the nephew just smiles and waves, so I’m guessing he thinks your just playing make believe or have an imaginary friend?

I’m rambling, but my main point is I hope is there will be some big climax/resolution in regards to Ray and the group.

Ok thanks, I tried it out and she died along with Parker
I’m not sure if I’m supposed to be happy soooo….
Thanks for the advice

I think you meant conservation 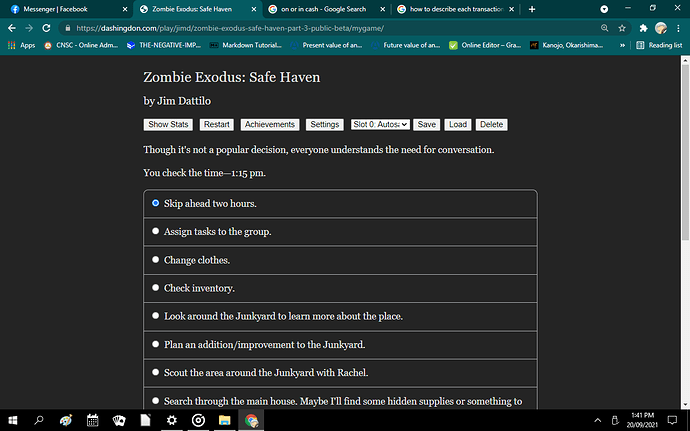 It has been a minute but is there anyway to save Gina? I thought I read a while ago that Jim changed it where if she was your RO, she could live. I could be off but I was curious.

Do u think later down the line you could implement hair and beard growth?

So Jim can see what the error is in the code when in this, for him to see this.

Thank you for figuring this out. I haven’t had time to look into it, but you did the work for me. Thank you.

So is there any way for Nora to die? This has been bugging me for a while

Nora can die in the beginning of chapter 7. It depends on how well or how poorly you are running camp.

I think you meant conservation

Yes, thanks for pointing that out.

It has been a minute but is there anyway to save Gina? I thought I read a while ago that Jim changed it where if she was your RO, she could live.

I loved the current beta but I feel like Woody ( my fav!) he kind of disappeared in part 3 which is a slight bummer. He doesn’t participate in any of the more meaningful mission and if I am not romancing him I barely hear about him at all.

Hi Jim,i know this reply doesnt belong here,but anyway,in Zombie Exodus how do you get the Harem archivement? I tried everything.
Male with males (except Crone unless i bring Emma),the same but with Female.
Male with females,female with females.
Absolutely nothing happens…

Are Church, Driver and Gina supposed to just die like that? The scripted death in Part 2 doesn’t really affect me since I barely know some of those people, but Church, Driver and Gina were introduced more or less in Part 1 so it kinda sucks that there is no way to save them. I tried to plan out all the defenses and make people work on them but seems like they still just die.

Well,It is assumed that in the end it was decided that Gina was not going to die, at least as scripted death and in this part, at the request of the fans, although with Edgar and Chruch they most likely have already kicked the bucket. I did not like this much in my personal opinion, since I feel that both were wasted potential, but hey we are in a zombie apocalypse, so I suppose we will have to adapt and try to save at least the most people as possible.

I haven’t done it myself to see if its possible but according to the code you need to reach the end of the game (the feedback screen) and have done the one of the following:

Is there any way to get Kelly in our car at the end of part 1?

Do I have to side with her when it comes to the Makarovs?

I believe there is. After the Makarovs tries to break into your house, go and confront them with Woody and talk to her. When she is ranting to you about the Makarovs, choose to help her because she’s hot. That should start the relationship early.

Did you get the Lone Wolf one?

No not that one. I already know about starting the relationship early I’m just talking about rising her affinity beyond acquaintance (55) because I have maxed out empathy yet can’t seem to push her to friend (60) in order for her to enter the car (just after part 1 ends, we ride off away from our house. Whoever is our RO will join us in our car)

I’ve found 2 bugs in Chapter 9 about Brody inviting MC to dance with him.

It should be *set brody_like 1 instead of *set bailey_like 1 under choice ‘I like ${flirting_with} and would like to explore a relationship with him.’, and *set brody_faction %-(round(20-(empathy/6))) instead of *set bailey_faction %-(round(20-(empathy/6))) under choice ‘I don’t like him too much and don’t want to lead him on.’

I’ve found 2 bugs in Chapter 9 about Brody inviting MC to dance with him.

Finally got around to finishing the chapter.

A couple of more major issues:

Fumes rose from the accident and carried virus throughout the lab. All were infected.

I realise that this is a story about motile corpses, now with a robot that can feel love, but this is kinda stretching my suspension of disbelief. Did a virus research laboratory really have ventilation that would actively spread potentially contaminated air everywhere? And if so, how could anybody think that this might be a safe place to live? At least at the junkyard the wind might have blown the fumes away…

And speaking of said robot, it seems a little cruel to activate the base shutdown and just leave him there. Could there be a chance to at least warn him, although I am not sure how well he could survive out of the base?