So in part 3, I decided to play the coward and decided not to enter the research centre. Once I got back, this is what happened.
“I tried to speak to Reilly and Madison, but both told me to speak to you,” Rachel says, sitting on the corner of the desk.

“Were there any problems there?” Jaime asks.

“We had some trouble. We were attacked by a scientist in a greenhouse and another scientist imprisoned us for several hours, but we were able to escape.”
“We killed a few zombies but nothing out of the ordinary during this outbreak.” I don’t want them to know about Murphy.
“Nothing we couldn’t handle.” No need to worry them over something that’s not relevant to our ongoing survival.

So it looks like my character knows about Murphy even though the group never entered the research centre. 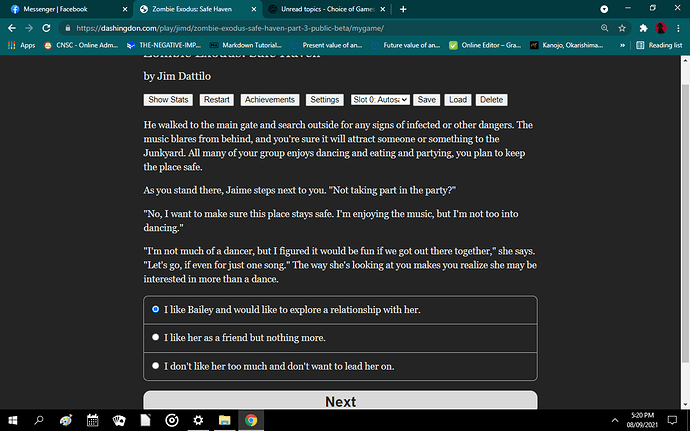 Madison steps forwards as you finish your set. Madison appears to be biting her lip, and then she gives a grudging nod. “That was better than I expected. Don’t think this makes me some kind of groupie, though.”

You shake your head at her. “I would never think of you that way.”

“Good. I wouldn’t mind being your manager or your agent. You are so talented, and I am sure lots of people would pay money to hear you. If this outbreak ends, we are going to talk about getting you on YouTube and maybe even American Idol. My family has connections.”

“That sounds great,” you say.

She gives you a quick kiss on the cheek and runs back to her place with others in the small crowd to listen to the rest of your set.

As you cross the Junkyard, you overhear Brody and Madison, who are entering through the main gates.

Is this mid level or high level, I kissed Madison and she miraculously wasn’t there.

I noticed that even with the update you’ve given us (much appreciated btw).

You still haven’t given us that steamy romance scenes with Gina. Nor the one with Kelly.

Could you please add that in to the full update on part 3?

Should mention that requests for content are not allowed. However, with your particular issue, I think most would agree the romantic content has been one of the game’s strongest points so far, and that there’s no reason to expect it would be dwindled down as it goes on. More scenes are definitely in the plans, it’s simply a matter of patience.

I will have my own feedback soon. I’m actually currently redoing my Part 2 playthrough.

Should mention that requests for content are not allowed.

Ah ok. Thank you for the heads up

I have just a quick question. Is there a way to actually save Gina or is her death destined? No need for complete details, just a yes or no will do.

Unfortunately not as Gina’s death is scripted.

I don’t ever recall Gina dying in my game, is it in the new update or something?

So I haven’t had time to look at this for a while, so this is going to be a longer Post. I played from 8-11. So I might note down things that were mentioned before.

I suppose you could combine singing with basically anything, but nothing is as seemless as singing and playing.

I certainly don’t disagree. I can’t sing nor play an instrument so I completely respect people who can do both! But it definitely would complicate the game anyways I’m not ready to handle.

So it looks like my character knows about Murphy even though the group never entered the research centre.

Yes, I definitely need to fix that. I’m contemplating making a change so that you can’t avoid the research center. Otherwise it is a extremely short chapter.

Thank you for pointing that out.

Got this error when going to the cabin:

Thanks, I will fix it.

Is this mid level or high level, I kissed Madison and she miraculously wasn’t there.

That’s a tricky bug, but I will fix it. Thank you for reporting it.

I’m still working on the main storyline, and then I will go back and add all of the romance scenes, conversations with other NPC’s, and lots of other smaller additions.

I have just a quick question. Is there a way to actually save Gina or is her death destined? No need for complete details, just a yes or no will do.

Originally, no, she could not be saved. However, I am going to rewrite it so you can save her.

So I might note down things that were mentioned before.

Thank you for your feedback!

Are there new RO options in later parts since I was able to flirt with the river Dog and one of the Ute?

Hi, there, well I think I found the reason why in Chapter 11 I can’t use any light source when I get to the bunker, you see, every time I rebooted and rebooted, I always chose the option to go to the cottage, and after talking with Fern and talk to her and arriving at the bunker for the entrance she says, it came out that like I said before: not being able to use any light source

BUT, now I tried to make a new run without going to the cottage, and after enter the bunker choosing one of the many options to enter, THEN NOW let me use the flashlight and the rest of the things for light, so maybe this is the error in the Chapter.

So Jim can see what the error is in the code when in this, for him to see this.

yeah as if we dont have enough problems with the silverthornes haha. anyways i luv ur icon!

Yahallo, i know Gina’s death is scripted, but Church and Driver died in mine. Is this also scripted?

Thanks for the response @bagledere

I’m super confused, when does Gina die? I honestly can’t remember her death.

She dies after you meet Sean, Fred, and Billie.

(Yes it’s during that scene)

Oh, is that when the old guy lets the zombies into the scrapyard?

I believe Church and Driver’s deaths are also scripted