Same error for me with trying to enter the decontamination chamber.

Yeah I’m having the same error

When I tried to enter the decontamination chamber, I got an error message saying, “chapter11 line 1946: Expected option starting with #.”

This is now fixed, and I will work on the continuity error. Thank you!

I was just wondering, (just a suggestion) if you go into the glass room and die, could you write a scene where the search party that comes after you, since you’ve failed to turn up to the rendezvous, finds you as a zombie? If the RO is in the search party, it would be great to see their reaction and whether they could kill your zombie form or not. I would definitely want to see how Madison or Bailey react.

I do not know why it happens, although I do not know if it is why I am using a saved game from chapter 7, or because of any of my character’s stats

Edit: I’ve tried skipping straight to chapter 11 and going from there but the result is the same so I don’t know what the problem is…

When I am heading to the military depot and stop off by the cottage, this appears when I say, select any of the four options, - ‘chapter11 line 940: invalid @{} at letter 11; there should be at least one pipe | to separate options’

To elaborate on this point, the relevant line is {trapped_by_fern "Now that I'm down,Since I'm here}, which is just missing a | between “down,” and “Since”.

A very low-level possible continuity error in the Fern conversation is that at count = 5 on line 1096, she “maneuvers a finger through one of the bandages on her arm” even if you treat her wound (line 1125), where you might use gauze or leave it unwrapped, depending on your available resources.

Excited to see the rest of the chapter, just posting some stuff as I go.

Only managed to get through to the end of the conversation with Fern, so here are my notes on that:

Regarding Brody, I definitely think that if student MCs can romance Madison, they should be able to romance Brody as well, even if Bailey’s present.

Hi, I just found another problem with chapter 11, and it is that the light sources appears blocked for some reason, I don’t know if it is because of something about my character or a code error, but I wanted to see if someone else had this problem or is it just me

@JimD I just replayed parts 1 and 2, and I find it weird that I have to play an instrument and sing separately. Could we possibly have a unique option to relieve stress that would give the benefits of two sessions in the time of one if you picked either playing the keyboard and singing, or playing the guitar and singing? 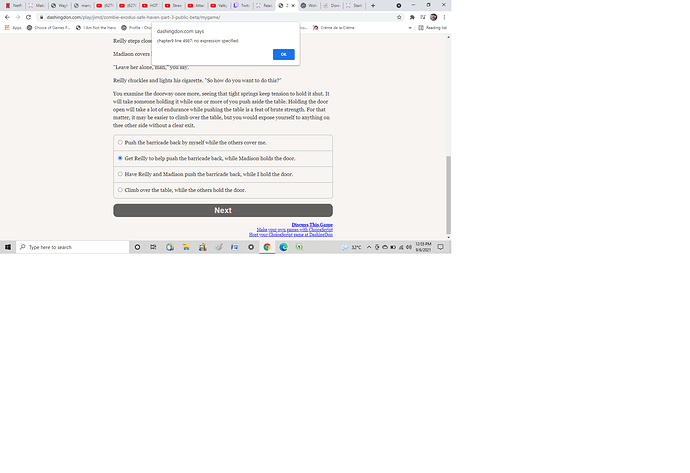 Pretty good, but i do have a complaint near the end of the story

When the new army send soldiers to attack, why can’t we have the option to fight back instead of running away by default? It is quite odd considering you could set up a very tough defense system and support from the Vanguard and the MC themselves could have high combat skill, while they only sent a dozen soldiers so maybe an alternative route where you fight them, win, lose relationship with the New army faction and opportunity to loot some more?

@Denzil_Melgior_Nagel I’m assuming this stuff will be taken into account once it releases. The author told me that there are a lot of variables from past parts that aren’t taken into account in the beta. Assuming this part will be a direct continuation of the same program (as part 2 was), this likely won’t even need to be addressed, seeing as the stats from the previous parts carry over seamlessly because it’s literally just an update to the existing game.

In chapter 11, public beta, It won’t let me choose any of the options because of coding or something, I don’t know if anyone else is having that problem. It’s when your doing the lone scouts. I chose to scavenge the cottage and I’m talking to the woman. I was asking her what a Liver is. I tried the other options and they aren’t working either.
@JimD

I wish another character could sing. I’d love someone who sounds like Billy Rafoul or Upsahl.

I have noticed a couple spots where my “a step below the Winter Soldier” character isn’t allowed to simply kill whatever threat is in front of him. Once with the Red Mamba fight in the museum and once here.

In fairness I’m sure it’s hard to make a plot work when someone has used all the extra skill points to make a super soldier that basically trivializes a good chuck of post apocalypse dangers. Hard to make the silverthorn feel like a threat when it feels like my MC could just sneak in and kill them all.

I have a problem with Chapter 11, and it is when I go to the cabin on the way to Lancelot

This problem is fixed now.

A very low-level possible continuity error in the Fern conversation

This is also fixed.

@ParrotWatcher thank you very much for all you’ve done to test this game and make it better!

Shouldn’t it decrease fatigue if you sleep more?

As part of the Deep Sleeper challenge, you actually feel more fatigued as a result of being such a deep sleeper. At the start of the chapter, all fatigue is reset so this just gives a slight penalty for those with the challenge.

I’m not entirely sure of the relative ages of Fern and the actor MC, but it seems weird that she would watch what I can only assume is one of their movies with her father and still have been living alone by sixteen… And did she go skiing with her stepfather before or after this?

Thanks for pointing all of this out. I definitely need to consider the timeline.

Regarding Brody, I definitely think that if student MCs can romance Madison, they should be able to romance Brody as well, even if Bailey’s present.

I don’t know if it is because of something about my character or a code error, but I wanted to see if someone else had this problem or is it just me

I can do get the light sources to work with a premade. I will check it with other means of character creation. Thank you for checking.

Could we possibly have a unique option to relieve stress that would give the benefits of two sessions in the time of one if you picked either playing the keyboard and singing, or playing the guitar and singing?

It would take its considerable amount of time to do this. I can see and number of hobbies overlapping, like gardening and singing, singing and dancing, etc. It’s definitely realistic to combine them, but I don’t think I have the time. But I appreciate the suggestion!

I found this for my restart!

Thanks for that screenshot. It will be fixed soon.

Pretty good, but i do have a complaint near the end of the story

I considered this as a possible route, but it would be a pretty difficult fight to win. In fact it would take a highly trained person even with the defenses, getting help from the Vanguards, etc. it would also take a lot to write. I’m not saying it’s out of the question, but in terms of balance, and not sure how to make it so players without extra skill points could win.

To build on what @ClaimedMinotaur said, this skill point inconsistency is only true with the testing character builder. I just made a fairly simple character builder. It’s not perfect, and I could make a lot of tweaks, but we are almost at the end of the beta for this part, so I’m reluctant to make major changes.

In chapter 11, public beta, It won’t let me choose any of the options because of coding or something,

if this is the issue that others reported, it should be fixed soon.

I have noticed a couple spots where my “a step below the Winter Soldier” character isn’t allowed to simply kill whatever threat is in front of him.

Balance is always tricky in these kinds of games. Even with the most skill points, I can’t code every possible outcome. I wish I could!

I can see and number of hobbies overlapping, like gardening and singing, singing and dancing, etc.

I suppose you could combine singing with basically anything, but nothing is as seemless as singing and playing. Singing and dancing is actually very difficult to do successfully, to the point that most musicians who do so are actually lip syncing. Singing and playing, on the other hand, is something you almost can’t help but do if you are able. Sucks that it would be too difficult to implement because I feel it would add a unique advantage to using both stress relievers on music. Ya, you don’t get to branch out for stat increases in other areas, but you get twice the stress loss in half the time.

Got this error when going to the cabin:

The error came with the option selected in the image, the museum one. 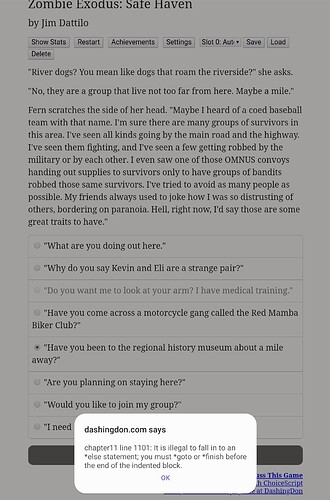