.50 Cal? I kinda wanna place it on the Skynet where I try to hide the fact that it has no more ammo and for it to act like a scarecrow of sorts

That might negate the FPS part, and there’s precedent in the game for decoys, with the Quaker gun at the farm. It be an option I wouldn’t mind having.

I think that in the new construction features defense and decoys will be big part. I also more interested in decoys traps poison that in all the offensive part.

Also that would make some never try other stuff and then complaint some use in reviewing"It is too short Where that half million of words in nextpart has gone?’

That sounds like some crap the casual players would cry about.

Not players of the game who actually know what this game is about and don’t have unrealistic expectations and murder fantasies that they pulled out of thin air . Also I did say not to make it craft-able so we would have to be strategic about how and when we should it use it.

I don’t think so it could, simply be explained as needing specific kind of tools that we don’t have access to. Limiting the use of it to what ammo is already loaded in the gun would mean you’d have to think carefully on when you want to use it or need to use it.

but come to think of it, it seems the gun could be unbalancing other skill … as readers could potentially think with the gun here, they don’t need to care for other skill…

I only see that happening if we had unlimited ammo for the gun which isn’t what I suggested at all. Also as it relates to combat I’m sure there are people who only value the firearms skill above other fighting skills so I doubt having a 50. cal is going to be the sole reason people would have that mentality.

I like this discussion on the 50 cal on the Jeep. I’ve personally never used it on zombies, feeling it’s limited ammunition was better saved for use on either hostile humans, hostile vehicles, or when a zombie horde couldn’t be stopped/delayed otherwise. Mindless zombies wouldn’t get scared by the greater noise and gore that larger guns create like people might. Using a 50 cal on anything less dangerous than armed hostiles or zombie hordes felt like wasteful overkill in a post-apocalyptic world where supplies are scarce.

That said, I’ve opted for large groups of survivors that can afford to save the 50 as an ace in the hole. I would certainly be in favor of being able to move and mount the 50 either in a defensive position or a better-armored vehicle. The psychological effect alone (on survivors) of a weapon capable of shredding most cover, destroying all but the most-armored vehicles, and tearing people apart at 1800 meters/2000 yards is something to consider.

As for crafting the ammo, I can see the merits of not being able to and being able to. If it was possible in game, I would bet would likely (realistically) require a huge amount of gunpowder, an proportionately huge amount of metal parts, and a Crafting skill of 90 or more. The opportunity costs of investing such resources might be prohibitive. Even then, a 50 cal isn’t an instant “I win” button. It can jam, and enemies that know how to fight would likely try to neutralize the 50 cal first and foremost. A 50 cal also isn’t man-portable; it can’t be taken wherever the MC might go, like an Arsenal AK or machete might.

In any event, what a great game Safe Haven is that it inspires such discussion. And as long as we are discussing weapons, might I suggest some variant of the M14 rifle as a new game option for the future? It’s a semi-automatic 7.62x51mm American classic, with multiple civilian marksman and military sniper rifle variants in current use and an effective range in excess of 800 meters with good optics.

Is there an exact number by how much the suppressor and the scope add to Accuracy and it’s Range? It says in the game that the suppressor also adds a bit of accuracy to the shot, but by how much? Or is it just for flavour now until stats for it are posted in the crafting menu?

I don’t know how to access the codes so can anyone point me in the direction? I only have the Node.js installed and downloaded the sample program to run the tutorial. I assume I need to ask @JimD for the copy to see the stats for it.

Is there an approximate age of Bailey, Jillian, Jaime and Tommy? I read somewhere Rachel is 30-ish 'cause I just found out you could have them as a RO for both Teenager and Adult MCs what I haven’t tried yet is having them both as RO in one MC(Have only picked one as an interest never tried 2 options) like with Jillian and Gina

I assume some people here have tried to do it, did it work or is it something we have to look forward to in the future and if it did work how much Empathy and Persuasion is needed? Kinda looking to have my MC in an open/polyamory relationship.

And when can we add our specific age in the game when signing up on Jaime’s recommended app?

No specific age. And I found it far better. Because a game ca n’t be tracking each age gap and a reaction to that for any Npc that can also be dead or not. Some stuff is better left it to player canon and imagination.

But why would need an entire code scene and variables in a game of millions of words to exactly Two lines.

It is just a fancy way of input your data with a little flavour for teens as immersion. It is not a real dating sim or anything

Also, date pages in Europe are for + 18 no teens in mature date pages it would be pederasty

Is there an approximate age of Bailey, Jillian, Jaime and Tommy?

Like I said, only for immersion it asked for race and other features like the tattoos and such why not age and a few more? I could have a 18+ sign up and if 17 below, the app declines it. And if an adult views the email app if they introduce a match it has more details like their hobbies, vices etc.

What’s a few lines of extra code if you could immerse people into the game more? Some people would I appreciate it. On the top of my head code-wise probably modifying the if statement and adding a boolean value if the teen is eligible for registering or not is easy enough maybe adding a few lines of existing code just pointing to other scenes.

How a minor can enter in a mature dating site to banging adults?

In my country and half of the world that extreme illegal. And something Apple can rate badly.

If you say you are minor in a date adult siteof course will block you off. Is illegal

Imo Jim already did way more work for immersions sake then any other author who write CoG/HGs so let’s appreciate that instead of demanding even more.

That is for granted. And besides, why add content that is considered controversial for Apple and many countries just for two lines.

Maybe more than two lines considering the dating scene we get if we choose that but I agree it wouldn’t be worth it especially since that’s just a prologue and we never meet again those people we can go on a date with in that. Opposed to that I personally prefer the background/profession based prologues anyway.

I say two lines as no way Apple will let the player minor go the adult site and go to an adult date without going up in the rating.
Hell, in theory, is even illegal in many countries content like that in apps.

How a minor can enter in a mature dating site to banging adults?

In my country and half of the world that extreme illegal. And something Apple can rate badly.

If you say you are minor in a date adult siteof course will block you off. Is illegal

Hey, maybe you misinterpret what I said, I said if the ‘teen’ is 18+ it allows it and if not it declines it.

In the game, PrimeMatch also offers Romantic dates only, just to meet people and interact.

I’m not saying to allow a minor to join the site of course it’s illegal. It only allows adults which are 18+

Imo Jim already did way more work for immersions sake then any other author who write CoG/HGs so let’s appreciate that instead of demanding even more.

Oh, sorry I haven’t tried other author’s work, this is my second game playing in CoG/HGs the first was Zombie Exodus which is also written by him. I understand just here bouncing off ideas.

Also if you check Tinder, the real app (we’ve gone so off-track lol) It allows teens 13+ but they also match you with the same age group not with mature adults. Just saying.

Teen is 17 It is said several places you aren’t adult yet.

The reason why the special flavour rejects of account was written as a flavour speciality for the minors.

Why Jim after writing several million words focus on customization has to make an entirely new scene with new character new variables. For kill them off five seconds later. And nobody will see like 90% of teens go to the party anyway.

When Jim has a entire new part with the building construction. farming and a war incoming. 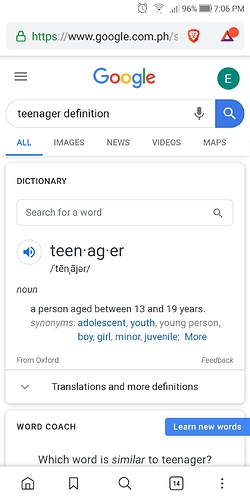 I understand, I’m not demanding it to be put in immediately. I know Jim has tons more important content to put in the game rather than what I suggested earlier. Like I said, bouncing off ideas. Good talk ( ^ω^)