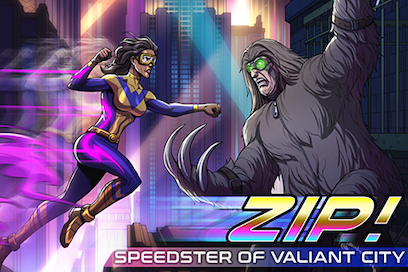 We’re proud to announce that Zip! Speedster of Valiant City , the latest in our popular “Choice of Games” line of multiple-choice interactive-fiction games, is now available for Steam, the web, and on Android and iOS in the Choice of Games Omnibus app.

It’s free to win, and $4.99 to turn off advertisements and delay breaks, discounted to $2.99 until February 27th! Turning off ads also unlocks special content!

Please note this is a special, omnibus-only release on mobile.

Use your speedster powers to defeat the superpowered Sloth and save the day, all while tracking down a deadly new weapon threatening your city! There’s no room for error in the hero business, not even for the fastest person in the world. One tiny mistake against your deadliest foe threatens to end your career and plunge your city in chaos.

Zip! Speedster of Valiant City is a 48,000-word superpowered interactive novel by @Eric_Moser. It’s entirely text-based, without graphics or sound effects, and fueled by the vast, unstoppable power of your imagination.

As a superpowered hero, you’ve beaten the Sloth before, but this time he’s finally gotten the upper hand (claw?) and he’s aiming his deadly new device right at the innocent citizens of Valiant City. It’s up to you to stop him and his terrible machine before time runs out!

Are you fast enough to thwart the Sloth’s scheme and save the day?

We hope you enjoy playing Zip! Speedster of Valiant City . We encourage you to tell your friends about it, and recommend the game on Facebook, Twitter, Tumblr, and other sites. Don’t forget: our initial download rate determines our ranking on the App Store. The more times you download in the first week, the better our games will rank.

it says item not found in playstore

The game is only available in the Choice of Games omnibus.

I guess it’s for the time zone but here in Spain the discounted price is € 3.49 which would be about $ 3.77 and the price varies if the device is android or apple. It 's not something that will make me stop to buy your games though.

We can’t control how the platforms price currencies other than USD, unfortunately.

I guessed that much, thanks for the quick reply!

Guys just bought the game , anyone mind telling me what extra content did i unlock?
Edit - Nvm just saw its a power boost

I wanted to let everyone know that I’ve created a comprehesive game guide for Zip! that breaks down all of the primary stats, the Juice resource, your relationships with your partner and with Silver Rocket, all of the various game goals and endings, etc. It’s free! To get it, all you have to do is sign up for my mailing list.

I’ll probably email it out on Monday.

And yes, there IS a CCH easter egg hidden in the end, but I’m not spoiling that.

@Servant_of_choices, and yes, the extra content is a Juice boost that doubles your starting Juice to 200, which basically gives you a lot more wiggle room on choices and helps you pass some choices you otherwise may have failed.

Maybe having the extra Juice will keep me from hoarding it and missing most non-Sloth challenges. Probably not, though.

You’re not my superpower supervisor!

Not showing up on google play

is now available for Steam, the web, and on Android and iOS in the Choice of Games Omnibus app.

Please note this is a special, omnibus-only release on mobile.

Like Sky Pirates, this is only in the omnibus app. Further comments asking where the game is will be deleted.

Oh my! A super hero I can code name Larry, and a cheating girlfriend? Sign me up! I really didn’t want to like this game. Just not a big fan of the speedster idea in general. But so far this is a fun game that doesn’t take itself to seriously.

Haven’t played the whole thing but played enough to see it is worth putting some money down in support.

I’ve played too with an MC and the (bastard) cheater of a husband but I missed some options as ending the relationship as soon as the MC found them or beat your partner, OK maybe it’s too much but at least the MC should have had (?) the opportunity to slap them. And the too many choices when it comes to repair MC’s marriage.
But I enjoyed the rest of the game… Still imaging Sloth as the Sloth from The Goonies

I’ve always wanted to do the thing!!

The thing is totally hot!

This was a nice and quick (no pun intended) read. I was really curious about Silver Rocket, but that is a wishful thinking for another day. Thank you for this!