The Hero Unmasked! — Impersonate your twin as a champion of justice! 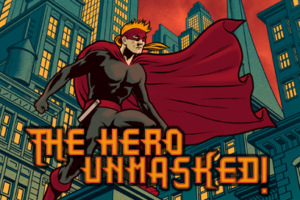 We’re proud to announce that The Hero Unmasked!, the latest in our popular “Choice of Games” line of multiple-choice interactive-fiction games, is now available for Steam, iOS, and Android. It’s 30% off until August 2nd!

Impersonate your identical twin as the Swashbuckler, masked champion of justice! You have two weeks to rescue the REAL Swashbuckler and marry the mayor before superpowered criminals take over the city.

The Hero Unmasked! is a 300,000 word interactive novel by Christopher Huang. It’s entirely text-based, without graphics or sound effects, and fueled by the vast, unstoppable power of your imagination.

As our story begins, you have everything you’ve ever wanted. Your TV news show is the highest rated in the city, and you’re engaged to the mayor, with two weeks until the wedding. But when superpowered criminals kidnap the Swashbuckler, you realize the awful truth: the person in the ransom video is your identical twin, and everyone thinks it’s you!

How is this going to work? Can you keep up the charade? Do you want to? When you meet the Swashbuckler’s sweetheart, will you remain faithful? To whom?!

Who is really behind the mask?

• Play as male or female, gay or straight
• Infiltrate high society events and root out criminal hideouts
• Uncover the true identities of Caledon City’s superpowered criminals
• Disarm a bomb and save the city’s finest from destruction
• Maintain the masquerade as you learn about the Swashbuckler’s secret hero life
• Find romance with a journalist, a pyromaniac, or a vampire
• Become a powered hero in your own right

We hope you enjoy playing The Hero Unmasked!. We encourage you to tell your friends about it, and recommend the game on StumbleUpon, Facebook, Twitter, and other sites. Don’t forget: our initial download rate determines our ranking on the App Store. The more times you download in the first week, the better our games will rank.

Not entirely sure if this is the right place to post this, but I got an error message (Specifically “C10 line 1428: Invalid expression, couldn’t extract another token: 's”) when I tried to tell my twin brother that I was relieved he was okay, stopping me from being able to continue the game.

Edit: And fix is live, please make sure to update.

Update your download. That is, the update should be live now on our end, and it’s just a matter of it rolling out to devices. Android users need to update the game, iOS users need to be on WiFi where it should silently update in the background, and Steam users need to verify file integrity.

Gotcha. Did so, and that fixed it. Thank you so much for the speedy resolution!

Hey, i played the demo and i noticed that you can choose polish surname “Wojciechowski”, i just wonted to point out that in polish most surname’s ends differently depending on gender. For mens it would be “Wojciechowski” and for womens “Wojciechowska” (though I noticed that this rule is ignored by most foreigners so maybe it’s not such a big deal it was just jarring for me as a native speaker)

…“or a vampire”? Waahahaa!!- cough nevermind… In all seriousness, this sounds fantastic.

True, but pretty much only in Poland. I don’t know any Polish-Americans who adhere to this, though I suppose there may be some.

The comic store clerk plucks the issue of The Swashbuckler out of your hands and carefully slips it back into its plastic envelope. “You know,” he says, “the full run of the Hero Unmasked! storyline is available in a single volume for $3.99, if you’re interested.”

Giggles Sold…Perfect demo and a high note to end the demo on.

I was already sold on this before it was even released just for another run at being a superhero in a CoG, so imagine how much more into it I became when I find out that this superhero fights with a lightsaber!

When will it be release on Amazon?

I don’t know if this happened for anyone else. I downloaded it off Google play, and was going to play the first chapters to see how it was. When I got to the end of issue 3, I was able to play to the end of the game. I hadn’t purchased it yet though.

I have purchased it after the fact, but feel I should point this out. I figured that I would bring this up here, rather than on the store to be public knowledge. Maybe it was a once in a lifetime glitch. Well anyway, this was a very good story. I thoroughly enjoyed it!

@Dark_Lord_Vul Thanks. It’s been fixed.
@kortovos We’re currently working on it.

Hope you don’t mind me jumping in with a quick question: How do you romance FB? I tried everything and the option doesn’t seem to pop up. ._.

I loved the demo, and would love to buy the whole game. If ONLY it would show up in the Amazon store. Why do some games take so long to show up? I’m gunna be real disappointed if I’m unable to purchase it before the sale ends…

So how is it guys? I really like the idea and the trial, but I would like some opinions before I buy it.

Are the romances good, do the choices matter and is the story good?

It’s excellent. You see the main stats? You have an approach for each of them, all different.

The story is really interesting, the game doesn’t do any twist by omitting details and from what I can say, there are at least half a dozen endings (from the achievements). Also, losing does not mean “game over”,

The weak point of the thing would be the characters. I won’t spoil, but all the villains are clichés, and some others are forgettable.

So, by my judging system:

Story: 4/5. It’s very captivating, but terribly predictable. I pretty much saw everything that was coming, but I read a lot soooo…

Stats: 5/5. The author does not make the mistake of favoring some or simply making them irrelevant. ALL of them can be used. You can face a powerful enemy and take him down or simply sneak behind them and knock him out. I don’t know if it’s an actual choice, but that wouldn’t surprise me. Also, the personnality stats influence dialogue. I think.

Characters: 3/5. The weak point of the game. The villains are memorable, and the protagonist too. And… That’s all. Pretty much everyone else is forgettable. There’s also a plot hole concerning the civilian love interest but… Spoils.

Replayability: 6/5. Clearly the strength of the game. There are different approaches, solutions to every case. If you have seen the choices in the demo, well the whole thing is like this. I have played through one time and it took me a whole afternoon. Yet, I feel like I barely discovered anything.

Final:18/20. Probably one of the best games of the year, of the entire site perhaps. There are tons of choices, all are different. Even if the characters are not the best, it’s fine because it is not the focus. To those who know, it is a bit like Dishonored: true, you are mostly confined in an environment, but you have multiple ways to travel through it. You can be the Swashbuckler or be completely different and the world will react accordingly. So far, this is (in my opinion) the game of the year for CoG and HG.

Thank you so much, I think I will buy it, but I need to know. Who is the most interesting romance option? I read the achievements and I spoiled myself on them and also the interesting thing that you are talking about I think.

Thank you so much for your reply!

It’s a matter of taste I think. The options are: the two first villains, the reporter at the beginning (never succeeded for them though) and of course your spouse.