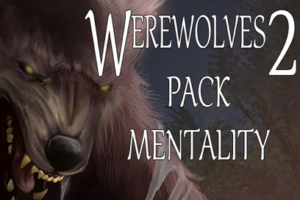 We’re proud to announce that Werewolves 2: Pack Mentality, the latest in our popular “Choice of Games” line of multiple-choice interactive-fiction games, is now available for Steam, Android, and on iOS in the “Choice of Games” app.

It’s a war between your werewolf pack and the Human Sovereignty Movement! Lead the pack to victory before extremists turn your packmates against each other.

Werewolves 2: Pack Mentality is a 360,000 word interactive novel in Jeffrey Dean’s @GreekWinter acclaimed ‘Claw, Shadow, and Sage’ series, where your choices control the story. It’s entirely text-based—without graphics or sound effects—and fueled by the vast, unstoppable power of your imagination.

This thrilling sequel to Werewolves: Haven Rising seamlessly integrates your choices and experiences into a new tale of survival and loyalty, desperation and betrayal.

After escaping the Haven werewolf detention camp and tasting freedom for the first time in your life, you and your pack must infiltrate “The Nail,” a top-secret underground military prison for werewolves, and liberate the prisoners. But integrating these new wolves into the greater pack will prove difficult, testing bonds and straining leadership to the breaking point.

In your fight for freedom, you’ll confront the phantom of your father and his legacy of self-hatred, as well as the opposing fanaticism of werewolf supremacists more interested in domination than peace. In the end, the greatest threat to your pack’s survival may be what you fear most, as your inescapable feral nature threatens to tear your newly-forged pack apart!

• Play as male, female, or nonbinary; gay, straight, or bisexual.
• Infiltrate a top-secret military prison deep below the Earth, risking it all to save your species!
• Overcome a deadly outbreak of feral madness that pits members of your new pack against each other.
• Either stand in solidarity with a bloodthirsty new packleader, or work to undermine them at every turn.
• Interact with a diverse cast of new characters alongside your old favorites!
• Explore two new potential romances, continue your relationships from Haven Rising, or go it alone in an increasingly chaotic world.

We hope you enjoy playing Werewolves 2: Pack Mentality. We encourage you to tell your friends about it, and recommend the game on Facebook, Twitter, Tumblr, and other sites. Don’t forget: our initial download rate determines our ranking on the App Store. The more times you download in the first week, the better our games will rank.

Ummm I mean I am so happy this is out!!

I’m getting an error when trying to load my save, already emailed it to support, hope it gets fixed soon because I’m dying to read it ahhh

@_m1 Is this the Peaceful_solitude achievement? If so, yes, that’s bugged. It’ll take us a hot minute to fix. But…that’s a dead end. You ended W1 by saying you didn’t want to be involved in the revolution. Book 2 respects that decision.

You need to do a new playthrough of W1.

I thought it would say I changed my mind or something lolll guess it’s time to replay it, thanks for the heads up!!

Is there an error message? Can you send a screenshot?

@jasonstevanhill when I click next, the game freezes and won’t let me continue and after a while the game closes and no error message appears

Are you playing on the web or Steam?

ok! We figured out what the bug was.

I thought it would say I changed my mind or something lolll guess it’s time to replay it, thanks for the heads up!!

I had a hard time with this one. To get that ending you have to explicitly say multiple times at the end of book 1 that you were done with all fighting and completely reject going with the military. There IS a short segment for you in game 2 though, as well as a secret achievement!

I thought about that one a lot, and in the end I erred on the side of respecting the player’s decisions and delivering an easter-egg. For what it’s worth, according to Steam achievements it seems like a very small percentage of players chose this path (less than 1%) so it’s in the realm of super secret achievement.

The current version that addresses the chapter 4 bug and the *peaceful_solitude achievement are live on the web, in the omnibus, and on Steam. The GPS standalone is processing; you’re looking for v1.0.5. That will probably be approved in the next three hours, but it could be seven days. No telling. AAA standalone is still not approved; that could be two weeks. And even then, it’s the bugged version of the game.

Is the maker a romqnc choice

Nope, only new ones are Tiva and Kotori

After playing through the previous title and this one, I’m starting to realize that while there is undeniable quality in this series; I just don’t think I’m built for it. Spoilers on general theme after one read-through:

There were flashes of hope in the first game, but this game has felt like nothing but an assault on the reader’s ability to trust and for testing the will of the ‘good’ playthrough. Every turn feels like it is meant to punish the diplomat, the peaceful.
Every scene feels like it is solely meant to punish you for expecting something good to come out of your choices. There is quality here, and this is only my opinion. I’ll make sure I’ve had a few more plays before I leave an official review, to provide a more thorough look.

Hi @BourbonDingo , I really appreciate you playing the game. Spoilered for response to yours.

I’m sorry you found the game too bleak. It’s a rough one I’ll be the first one to admit, but it lays the seeds for a positive diplomatic ending in the last book depending on your actions and successes. There are a lot of atrocities you can put an end to and stop in here that may not be immediately obvious. I know that may be tough to hear, but I feel this book is kind of like my ‘The Two Towers’ or ‘Empire Strikes Back’ (sorry, I know that sounds pretentious) in that it’s a middle book that leaves it hard to hold on to hope, but will lead into victory in the last instalment of the trilogy. I totally understand how you feel and I sympathize (I really felt for these characters, and I want to see them find peace.) If your journey ends here, I completely understand, but I hope you’ll see it through to a more happy conclusion when book 3 comes out. Thank you so much for your support and honest commentary.

Good to know. I do appreciate the absolutely amazing quality of the writing, and I think that lends itself to my specific issues, which makes it doubly hard feeling like I did. So, I guess that’s a compliment to your skill, moreso than anything.