Hello! I am… so deeply nervous to post this… I’ve been chipping away at this for the past month and finally feel like it’s at a stage where I can actually start getting some eyes on it.

The Shift changed a lot of things. Much of the world people knew was lost, and what wasn’t lost was irreparably altered. But from the ashes, through little more than luck, coincidence, and dogged human ingenuity, Wall arose–a city of contradictions, of relative safety and constant risk, of unprecedented abundance and unavoidable need. This is your city. You learned the way it lives and breathes, and you made it your home.

But something in Wall is… sick. There are ghosts in your past holding long grudges, and your new employer is adamant that you face them. What you want seems to matter less and less.

Somehow, for some reason, the life you know is being dismantled piece by piece. And no one else seems to notice.

Form connections and build alliances (or ruin them), do some crimes, defend your independence, and █̵̢̥͂̆ͅ███̶͇̪̱͕͛͆̕͜͠█̵͓̮̦̣̂̌̆̀͂██̸̡̛̑̀̾͝██̶͔͕́̓̍͝?̵̱͛̇̏

Some of what you can expect as the story progresses:

You can also follow the dev blog over on tumblr, if you’re into that sort of thing.

Aaaand thanks for looking!

The story’s great so far, I love your writing style! I can’t wait to see what happenes next. I’m dying to see what our new job is!

Don’t be nervous! You’re a bloody talented writer (and yes I am saying this before playing the latest demo version, but you know how I feel.)

Edit: Playing now, but you need to click the little square on your game to enable the save plugin. It’s if you click ‘edit details’, the little cogwheel on your game in Dashingdon. It’s weird, even if you do it from the start, it never sticks. You have to open it up again to enable.

Edit: Playing now, but you need to click the little square on your game to enable the save plugin

aw heck… I definitely did do that when I was uploading the files but like you say, it must not have stuck. Hopefully it’s working now…?

The story’s great so far, I love your writing style!

aw heck… I definitely did do that when I was uploading the files but like you say, it must not have stuck. Hopefully it’s working now…?

It never sticks for me. Also, this is slick as hell and I love it. Don’t even have any notes, everything flows, love the people, love the dialog. Professional.

I’m down for a gritty Solarpunk game.

This is atmospheric and all hell and I am so down for it. I can almost hear the ambience~

The characters don’t feel two dimensional at all, motivations are convincing, and I’m so ready for whenever you grace us with more. From the looks of it, maybe it won’t be just be the sun thats on the horizon, but pontentially also some aaaaaangst.

This is super interesting so far and I’m excited where you go with the rest of it. Keep up the great work so far

You, my friend, are on to something really great here. I loved the way you told the story fluently, the characters are good (I’m starting to have a soft spot for Ozzy already

) and your writing has this amazing ability to project the atmosphere and environment the story’s in. Not to mention, cyberpunk

Just something I noticed, could you manage the paragraphs a bit more? I’m reading this from my mobile and it’s looking like a bit of a wall of text here. Although that might be due to me not having a good mobile 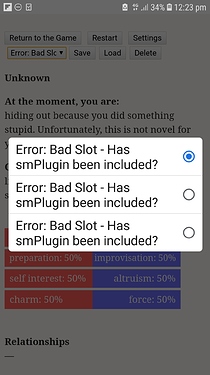 I think you need to add the plugin.

I’ve really enjoyed playing what there is so far. I’m interested to see where you go with this world.

I would have liked to know a bit more about the Keepers, and whatever sort of government they’re affiliated with, and about the rebels (or at least public knowledge of them) before being asked to decide whether my character sympathises with the rebels or not. It feels like an important character decision to make on so little information.

Also, there was a typo when I was talking to (Hayden) Ozzy up in the canopy, where he was referred to as “hee”.

Thanks again for sharing, and I hope to read more when it’s written.

oh man, thank you so much everyone!! I’m surfing on these good vibes right now and really excited to start working on the next installment.

I would have liked to know a bit more about the Keepers, and whatever sort of government they’re affiliated with, and about the rebels (or at least public knowledge of them) before being asked to decide whether my character sympathises with the rebels or not.

Oh this is an excellent point (especially if I want that decision to carry some weight later on), thank you! I’ll have to see if I can weave a little more exposition into those early pages, or else maybe just expand/rework the “opening crawl” a little to get that background in there.

I think you need to add the plugin.

HRM… I have the code for the plugin right in the startup, and the box to enable it checked on dashingdon, and it seems to be working for me… can anyone else confirm whether the saves are/aren’t available? I gotta figure out how to troubleshoot this.

”Error: Bad Slot” here, as far as the plugin is concerned.

Liking the wip though!

The save is working for me now, maybe just need a cleared cache from earlier?

Nice. You’ve got my attention with this demo.

A little more exposition might be nice early on. Sometimes finding things out is half the fun but it does mean some of the early choices are just shots in the dark. Not always a bad thing, just something to think about. Save system worked fine for me.

My only real question is what is solarpunk?

My only real question is what is solarpunk?

OOooh that is a big question. Do a picture googling, trust me, it’s worth the ride. In short, cyberpunk but with a more positive environmental spin. Also, plants.

So I gotta squeeze this in somewhere between cassette and cyber, got it thanks @malinryden.

Yeah I can picture playing with that.

Yes! In kinda broad strokes I would say solarpunk is like, visually a contrast to dieselpunk, and thematically a contrast to cyberpunk; like @malinryden said, more optimistic and focused on sustainability and coexistence. But I’m personally still weak for the aesthetics of cyberpunk in particular so I want Wall to hopefully sit somewhere comfortably in the middle.

It is a nice , interesting story thus far, which put the MC immediately into the heart of action.

In a way, you did a nice job by “guiding” the MC into taking side with the rebel , although some might want to align with the keepers but at the moment, the path seem naturally flow .
I like that scene when MC was offering to aid the rebel, the rebel leader wisely declare she was suspicious of MC’s turning coat so soon… it was a well thought plotline.

Somehow , i am feeling a Total recall vibe from the story , where MC may not be who he/she seems , was MC unconsciously being led into a grand scheme ? And i suppose there might be a choice in the end to side with the keepers instead😅
As for bug, i think there are numurous time when a supposed female ozzy being refer as he or his .

The conversation with Ozzy is very interesting to read though