A bit of feedback…

This is a question, rather than a suggestion. Why did the MC have no contact at all with the team for two months after they’d already been declared a part of the team? Really, it seems like the MC is just now becoming part of the team. That seems a bit odd. You might want to provide some kind of explanation for it, so it doesn’t come off so forced, especially since the MC seems unneeded, UB does everything without her, and she’s more of a charge than a team member, even from Rebecca’s words of “they’re here to protect you” (which implies the MC is useless and just something to halfway guard along with the town).

Don’t worry, that’s not a bug

I left it that way in case people wanted to be super upped in only one skill. Though maybe different wording on the question might be better, instead of saying secondary skill? I’ll look at that!

Cool! I actually love that idea. But maybe wording it differently would help. I assume the coding will only allow you one choice at a time, so maybe instead of changing the question itself, just add in parentheses that you can choose the same skill for primary and secondary to max it out?

On the same note, will we be able to adjust our MC’s skills for imported saves? Or friend points?

I don’t know if I should greedily devour the demo and then wait impatiently for more or just wait for the whole thing…someone help me with my first world problem!

Also, after playing through all the options, am I the only one that is going to have an incredibly hard time choosing the dialogues for the romances? Like, most of the answers are perfect for me? And I don’t know what to choose?

The only one I know for certain is M romance and the one that will kill off their mood because you throw a serious sense into their flirting. I still can’t get over how if you subtly say that it would be worth the time to know each other better it makes them so damn confused, to the point that they are not capable of giving a flirty remark to that. It’s honestly top content and I can’t wait for it in the full game.

My character despises her mother there is absolutely no love there

This is something two of my MCs share with yours. And, honestly, as a reader, I find Rebecca grating and annoying. She treats the MC like a child she doesn’t want to grow up. She reminds me of those parents who never want their kid to become self-sufficient just so they can continually have the kid depend on them. Screw that.

She hates people trying to take the only thing she has from her.

While my MCs don’t hate UB, I get this, too. And the demo kinda made it worse, what with UB running around the detective’s town patrolling without her and not including her in anything they’re doing in her town for two months. It’s not cool. At all. But I blame Rebecca for it. It’s like she wants to sabotage any chance the MC has of becoming a real part of the team and being able to deal with what might happen just because “meh, I want to protect you instead of treating you like an adult who can handle stuff.”

Darn it. I find the bar scene more entertaining for Adam and Mason but now I am tempted to do the office scene for both.

I’ve played both with both A and M. The office scene with M is actually better than the bar scene, to be honest. At the very least, he’s not talking about picking up a group of chicks looking at him like he’s a meal and they’re starving. And there’s still flirting

The A scene at the office… I don’t like it. It made me want to punch Adam right in the nards. As hard as possible. So stick with the M scene for the office one! Just my rec.

I totally forgot to try out the M’s office scene come to think of it so I better check it out.

A’s office scene was okay with me but I like the bar scene better.

Also, after playing through all the options, am I the only one that is going to have an incredibly hard time choosing the dialogues for the romances? Like, most of the answers are perfect for me? And I don’t know what to choose?

I know! She’s got a lot of great options. I keep switching because I can’t decide!

), but I’ll be sure to be around for this one!! As always, Felix is my absolute favorite, his stuttering and over-eagerness makes my heart melt!! Fantastic job mate!!

Just dropping by to take a wild guess about the girl our detectives bumped into: a harpy. No idea if they exist in the world of Wayhaven or how that would even work, I just got bird vibes because of the feathers lol

Now you say it, I can totally she her as one of the harpies from wow!!

I will be honest if i found out supernaturals were real i would board up my house and hide in there armed to the teeth and never leave.

I work with UB because I have to. But I don’t have to like it. Ultimately as soon as Wayhaven is secure I’m telling them to hit the road and don’t bother with Christmas cards. I’ll become The Grimm of Wayhaven without their help if needed. Saw people talking about Bobby I’d love to (try to) expose the existence of the supernatural to her just to say fuck the Agency. But either she wouldn’t believe me, the proof wouldn’t come out, or the Agency would mind wipe her. But I’d enjoy the backlash from them.

Just a reminder to try and keep this thread as book 2 focused as possible, please! For general Wayhaven talk, please go to the discussion thread

Yes everyone, please listen to what @Meira_Litch says.

It’s only been a few hours and we’re already 150+ comments in. Most WIPs don’t even reach that in a week, some not at all.
For the sake of convenience let’s please try and keep this topic focused as much as possible on feedback for the game so that we don’t unnecessarily hit the comment limit. That’s what the general discussion thread is for.

And please remember to use spoiler tags in this thread, the other thread does not have thay restriction.

And that’s my lecture for today, ;p

I hope there’s a scene where someone tries to hypnotize us using our love… Oh your family…oh. your friends…oh… Well crap. You’re just kind of a miserable person huh detective?

@Seraphinite i have a question! one thing that doesn’t make sense to me, at least, is why the detective didn’t have any contact with the unit in those two months after they left the facility? i thought they’re already part of the team and i just think two months without any kind of contact is just too long and there must be some explanation for that.

other than that, I really loved the demo! M and F laundry fight scene is the best (so far)! 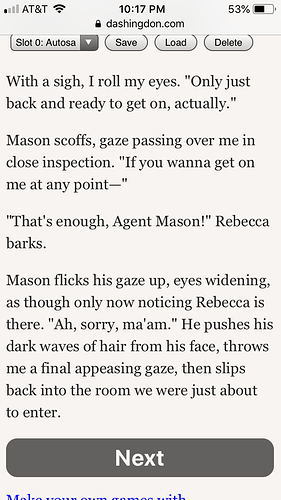 Soooooper important question: Is the corner of our desk still smashed up? Because I kind of really hope so.