F actually already teases A about it in the 1st book.

Now every time I think about A, I’ll see someone breaking Batman’s back.

Thats all up to you, game doesn’t mention your race.

Is that what that “gweilo” means? That’s rude.

Well, you can play who you want to. There is no restriction, so your query of:

can you play as something different from a gweilo?

would depend on you, I guess.

oh man i had to google this

@Ferrrrrnando Hey we like to keep a nice, friendly and inclusive atmosphere here, regardless of background. Would you mind very much editing your comment just a touch?

Is that what that “gweilo” means? That’s rude.

The literal translation of gweilo would be ‘ghost person’. The ghost part could be a reference to the ghost’s pallor (the light skin) or, more negatively, to demonic aspects (which would come from the resentment towards the west).

The literal translation for ‘white people’ isn’t used to refer to white people, but gweilo is used instead. Generally, it simply refers to white people without the negative connotations associated with the ‘gwei’-- the ghost. However, it can be used in a negative or racist manner. It comes down to how it’s used (i.e. the tone or situation).

All that said, I can’t say I like how Ferrrrrnando used it.

Well, the only negativity I like seeing on this thread is when everybody agrees to hateloving Bobby.

TFW you have to write Bobby’s slimyness again...

To be fair, writing the choice responses is great fun :D Choice: "Standing outside my door at night? That's creepy, even by your standards." Bobby frowns for just a second before placing a hand on his...

Oh, you sweet, slimy reporter. May you never change even though it would super nice if you did imagine if Bobby used their powers for good…god I can’t imagine either, damn it Bobert

Dunno, at first I thought he meant something (the only thing, really) that bothers me in the game: it sometimes feels too much like a cliche “anime girl trying to romance a boy”, doesn’t matter the choices. I don’t care about the rest, but damn, it is tiring to suddenly see a thing that no one would ever do in a book. That said, maybe it’s me and my friends who are wierd.

Well, this is a romance series, so it is par for the course for the romance to be so important.

That said, I also find the non-RO characters to be appealing in their own wonderful ways, enough to supplement any time I need to take away from having my heart near bursting with Suavewell.

One day, he shall truly kill me, and that day will be the happiest of my life.

No, you misunderstood me. You know that part of an anime where the cringe is so strong you want the Earth to swallow you? Well, that’s what happens sometimes (very few and much less subtle). It’s just annoying, because it’s generally well-written and I like it, but it still is just a tiny part.

Oh, I did misunderstand you, I’m sorry!

I totally get what you mean though, as I get that “oh god no pls hnnnnnnng” feeling whenever I watch the Office.

Oh!
Which!
Reminds me…

Wait, hol’ up we’re in the wrong thread, woopsie! Let’s take this over to the general chat.

You’re mistaken, I didn’t do anything to your post. I didn’t even flag it, though this does show you that perhaps the term isn’t really one people are comfortable with seeing here.

And besides, your first comment still has that term, and you can still edit that one away.

Another good week! I actually got further than I imagined I would.

Thought I would only make it up to where the end of Chapter 9 branches, but instead I got a really good start into one of the branches (and it was great fun finally getting to write that scene, hehe ;D).

I also managed to code in and make work the Key Decisions and Detective details stats page, which some of you may have seen on Instragram.

It was a brilliant suggestion by arlieopal on Tumblr that I hope will help people who have multiple MCs, or just need a little reminder in Book Two after the wait!

I’ve also recently had quite a few Tumblr asks about how long it took me to write Book One. The answer is a year, so I’m guessing people are wondering if Book Two will take about the same time.

So, I thought I would help to give you an idea of why Book Two is taking longer (though hopefully not that much longer!)

This is what the basic plan looks like for Chapter 9 (a relatively simple chapter compared to others in Book Two) : 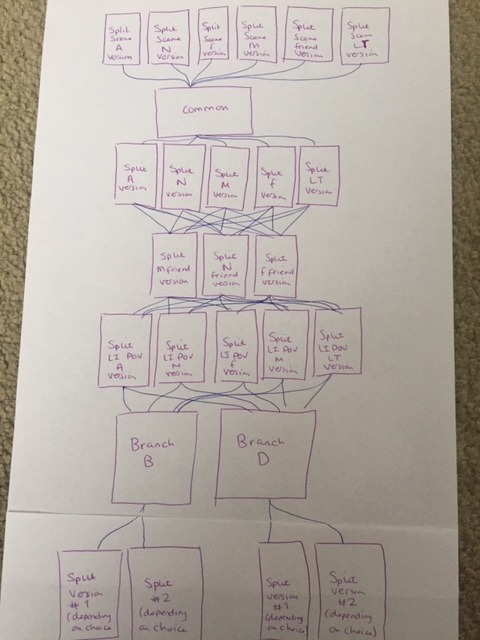 Each one of those boxes is a version of a scene that has to be written out before moving onto the next set of boxes.

Book Two has a TON more variation in it now your MC has actually made decisions and started earning points to friendship, etc. Which is gonna make replayability hopefully great, but it also takes a lot more work!

So that’s also a little sneaky peek into Chapter 9 for you too, hehe ;D

Hope everyone is doing well and I’ll update you all again next Friday!

The nerd in me loves seeing this! I’m gonna print and put stars & heart stickers or something to track as you move along each part

Some of you may have seen on Instagram that I finished the writing for Chapter 9 this week! Woohoo!

I’m having to look over Chapter 10 because I may need to split it. But I will be getting started on writing it next week no matter what I decide on that!

So yeah, a great week of writing where I got to write a couple of scenes I’d been waiting aggges to write! Those are always some of the best moments, hehe

Hope everyone has a wonderful weekend and I’ll update you all again next Friday!

That great new you put lot work in this chapter

ARE YOU EVERYWHERE OR AM I SEEING THINGS???
Seriously tho. Pls tell me there’s more than 3 chaps now