The Superlatives: Shattered Worlds — Hunt a killer and save the solar system! 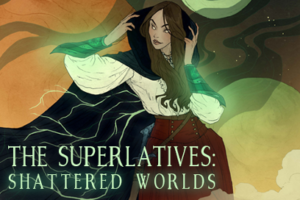 We’re proud to announce that The Superlatives: Shattered Worlds, the latest in our popular “Choice of Games” line of multiple-choice interactive-fiction games, is now available for Steam, Android, and on iOS in the Choice of Games Omnibus app. It’s 33% off until April 4th!

Conquer assassins and alien invaders in Superlative London! Defend Earth and negotiate interplanetary peace as you race to rescue Queen Victoria in this thrilling sequel to TThe Superlatives: Aetherfall.

The Superlatives: Shattered Worlds is a 218,000-word interactive novel by Alice Ripley. It’s entirely text-based, without graphics or sound effects, and fueled by the vast, unstoppable power of your imagination.

You are the Arbiter, a planet-hopping operative assigned to stabilize a peace summit between Mars, Venus, and Earth. But when Queen Victoria is targeted for assassination, you must find her killer, unmask the Mysterious Officer he serves, and stop an otherworldly invasion before it’s too late! Armed with powerful aetheric artifacts and your own wit and skill, you’ll fight alongside your allies to unravel the mystery of this new threat, defend your home planet, and face a final foe both strange and strangely familiar.

Your employers, the shadowy body known as the Divergent Conclave, are dedicated to maintaining peace between the planets. Impress the Conclave and its members might help you protect Earth—or recruit you to serve their personal agendas. Will you manipulate them to gain their support? If the peace summit falters, will you placate the parties, or choose a faction? How will you stop the impending invasion? And who will you romance?

What started as a job of politics and diplomacy could end in murderous chaos. Face aliens, automata, and whole new worlds on a quest to save the solar system!

• Play as male, female, or non-binary; gay, straight, bi, or aromantic
• Import a Superlative character from The Superlatives: Aetherfall, or create a new Arbiter character from scratch
• Wield your very own invisibility cloak
• Uncover a double agent within the Queen’s Superlative Service
• Charm a menagerie of aliens, from multiform, jellyfish Jovians to miniature Mercurians to furry Saturnians
• Play as a battle-loving brawler or persuasive pacifist
• Romance a driven detective, stylish secret agent, or your violent Martian secretary
• Solve murders, negotiate with pirates, and uncover interplanetary conspiracies
• Cultivate your reputation among cats…or is it just one cat?

We hope you enjoy playing The Superlatives: Shattered Worlds. We encourage you to tell your friends about it, and recommend the game on Facebook, Twitter, Tumblr, and other sites. Don’t forget: our initial download rate determines our ranking on the App Store. The more times you download in the first week, the better our games will rank.

• Uncover a double agent within the Queen’s Superlative Service

Really? Not complaining about that as a plot device, but isn’t that kind of spoiler a bit much for an advertisement blurb?

Dont trust the blurb.
There is more of one cat definitely

Thank you Alice Ripley and CoG team for putting forth a strong sequel.

That’s not even a main plot, without this description we won’t even realise about it… hence the description there is good to let readers look for this route … else most likely readers would just skip past it…

Finish this and this is awesome but I do have a complaint; only one though. I wish there was more character and relationship development with the previous companions; The MC didn’t even meet Tua, Arturek and their own sister. Also, my MC relationship with Dusk was very much on the side. I kinda hope that the game will give us some development in our relationship with them (or other character we chose to romance from the first story) and for us to know them better. Indeed it was a fast paced story thus not leave much for quiet time; but I do wish there was.

Quite a strong sequel for the Superlatives game. But still has no idea what to do with the cats though

They helped me during the end battle lol.

Really? I need to do extra effort to get their helps then

I just take in every cat I run across like in real life lol.

I have a question, are there any difference if I carry over my file from the first one over to the second one?

I still haven’t finished the playthrough in order to carry over my character.

You play as your character otherwise you play as the Arbiter. Also some of the relationships are different like Kesh naturally being closer to the Arbiter, since they’ve been together 11 years, than your old character.

I really like the story, but as a standalone.
To me I almost consider I don’t play the same character… More like a story in the same world.

I’m a bit disappointed about that but that’s still a good story, thanks for that

I feel the same; I think it is meant to play as standalone rather than continue with the previous character.

The previous char might have done better as a cameo than a continued mc.
Especially in the interactions with this game’s ro’s there was a definite disconnect.
Little bits and pieces (like the saturnian sign language) felt out of place for the old mc, who would have had to learn it fluently in a few weeks.
Likewise there were things that appeared to be refs to the first bit like cob who i was certain would turn out to be a human soul automaton like gatsby. but nothing came of it.

As a standalone its good, but overall weaker than the first game. There was too much misguided parody for my taste (moon moon e.g.) and somehow… the stakes felt smaller than in the first game.

The first game built things up bit by bit things coming together as a whole.
Here we had cases of “this personal and unrelated thing is important to the big thing somehow” which can work but here it felt a little displaced and more of a means to have the npcs be relevant.

ADDENDUM: There is also some parts with Kesh that feel disconnected if NOT playing as the old MC. There’s some exchanged (cats, gender etc) that feel out of place to me in light of the arbiter and kesh allegedly knowing each other for 11 years.

So I was playing steam version of the previous game,how to input my save?Or output my previous save?

At the end of the game, there should an input save file name and input email text box. The email will be inputted at the start of Superlative 2 to provide the list of saves where you use to choose which one to load.

Super fun game, but not a fan of importing my character from the previous save–probably would’ve been better to import worldstate. Felt pretty useless, considering the game looks you dead in the eye, grabs everything you carried over from the previous game, and quietly says “You can’t use this now.”

That being said, I had a ton of fun with my new game Arbiter, and the cats cracked me up. Played it twice already.

Also, SPOILERS:
Can someone explain why the assassin actually killed anyone before the ball? I mean i get something about stability of the rifts that needs us… or something, but…it feels like a rather weak plotdevice to excuse the bad guys not working efficiently.

In the first game the bad guy’s plan and actions made sense AND we pretty much stumbled into the case. Whereas here there’s a feeling of ‘this stuff happens so there is a plot’.