"The Play's the Thing"—Break a deadly curse to save your theater! 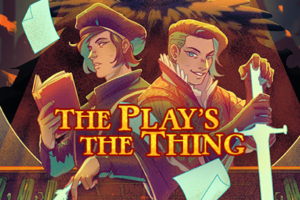 We’re proud to announce that The Play’s the Thing , the latest in our popular “Choice of Games” line of multiple-choice interactive-fiction games, is now available for Steam, Android, and on iOS in the “Choice of Games” app. It’s 40% off until September 2nd!

Can you win fame, fortune, and romance as a playwright, before a deadly curse brings the curtain down for good?

The Play’s the Thing is a 245,000-word interactive romantic fantasy novel by Jo Graham and Amy Griswold, best-selling authors of Stronghold: A Hero’s Fate and The Eagle’s Heir . It’s entirely text-based, without graphics or sound effects, and fueled by the vast, unstoppable power of your imagination.

Become the official playwright at the Odeon, the most prestigious theater in Medaris. Here, high society gathers to gossip, frolic, and flirt. Dazzling special effects, enhanced by real magical enchantments, keep the audience in their seats. The plays you write have the power to manipulate public opinion, changing the course of history.

But as you’re waiting for your first opening night, rumors begin flying. Deadly, shadowy creatures are stalking the city’s streets. Mysterious accidents threaten your productions. It’s a curse, people whisper—but only where the city’s harsh ruler, the Raven, can’t hear them. And to discover the roots of the curse, you’ll have to dig deep into secrets that the city’s nobles would prefer to stay safely buried.

The city’s quarreling rulers have strong opinions about your theater, but they’re also susceptible to its powers. Will you inspire them to save Medaris, or destroy it, as they destroy each other? Will you insinuate yourself into their hearts and minds? Will you expose their darkest secrets?

Will you write your way out of the tragedy that threatens your city, or call down the curse deliberately, carving your name in the annals of infamy?

• Play as male, female, or nonbinary; gay, straight, bisexual, aromantic, or asexual.
• Win popular fame, critical acclaim, or royal favor and avoid scandalous exile.
• Find love or lasting friendship with your actor buddy, the theater’s acerbic director, a swashbuckling city guard, or the heir to the city.
• Manage quarreling actors, skeptical critics, deadly enemies, and a dancing bear!
• Uncover mysterious secrets from the Raven’s past—and your own.
• Battle dark creatures with enchantment, swordplay, or spectacular monologues.
• Assassinate the city’s tyrannical ruler, or win them over with your inspiring productions.
• Use your fabulous wardrobe to play whatever role will win the day.

We hope you enjoy playing The Play’s the Thing . We encourage you to tell your friends about it, and recommend the game on Facebook, Twitter, Tumblr, and other sites. Don’t forget: our initial download rate determines our ranking on the App Store. The more times you download in the first week, the better our games will rank.

Damn. Whoever did your Gamebook cover is a BOSS.

Remy swaggers into the room & joins Riese on the couch.

Riese shugs as Remy settles herself in to read the synopsis of this new game.

Hands off, Rem. This one’s mine.

@Mary_Duffy @jasonstevanhill I can’t run the game it tells me the executable is missing!, also it tells me that the update failed so I can’t open the game.

Running into the same problem on my end. Verifying the integrity of the game (or uninstalling and re-installing) doesn’t change the error.

Thanks, and thanks @black for reporting this. We’ll have it fixed soon.

Can you and @black try again? I hate to say this, but closing out of Steam is actually kind of difficult–it continues to run in the background. The most reliable way to do it is actually to reboot your machine.

@Mary_Duffy one thing I noticed is that when I downloaded the game it came without any .exe

A restart, re-install did not change the outcome on it. Looks like Steam is looking for theplaysthething.exe and there is only an electron.exe executable.

Yep. Got it. We’ll have it sorted out in a few minutes.

Update queued in Steam, and it looks sorted out. Thank you for the quick turn-around.

Congratulations in the release…

Aw man I loved Eagle’s Heir so this was an autobuy for me, and it hasn’t disappointed! I admit I saw one of the reveals coming a mile away and had waaaay too much fun tailoring the my plays to 5 second foreshadow it lol.

Quick question before I jump into replays I’m assuming that reconciling the heirs and marrying Falathar are mutually exclusive endstates, seeing as keeping Ezren alive to get the marriage option means you don’t have time to set up a meeting with Salazar?

I love the setting and I’ve been having a decent amount of fun reading trough but this COG title suffer from the common problem of choices sometimes being too vaguely explained to properly convey what stats are associated with the choice. I’ve restarted multiple times because my character personality stats radically switched because of choices that seemed to imply something else.

In the end I ended up messing up too many important choices and being forced to restart from the beginning so many times that I am beginning to question how much I really care to go for a new playtrough as my last one went awry after a couple hours of playing and I’m finding myself less interested in trying to remember exactly which choice increase which stats so I don’t accidentally lock myself in a failed route.

Yes, you’re right that you can’t achieve both of those things in one playthrough.

The cover art for this is some of the best I’ve seen from the COG lineup. It has a really strong sense of identity.

Hey any chance we could romance the Raven? That’s what I’d really like to go for lol.

Congrats on the release! And awesome artwork on the cover!

I’m so thrilled this is out! Congratulations!

A relatively simple yet well executed story. Definitely a recommend.