"FORTUNE the FATED" by Zachary Sergi 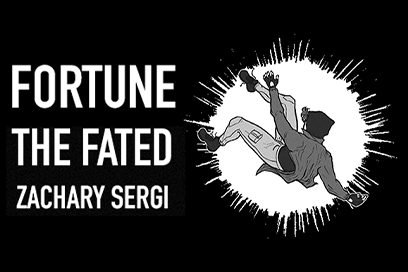 FORTUNE the FATED is a 130,000-word interactive novel by Zachary Sergi that continues the saga of the Sergiverse. It’s entirely text-based, without graphics or sound effects, and fueled by the vast, unstoppable power of your imagination.

In a galaxy that faces an insidious invasion, an elite squad has been trained to scour remote and exotic planets for the secret powers capable of destroying the invaders. The key to unlocking these mysterious and destructive forces rests in one young adult with unthinkable magical powers—and whether you become the galaxy’s greatest hope or its most wretched threat is up to you. Can you navigate fantasy anime quests, noir detective investigations, heroic reality competitions, dystopian world explorations, and deep space heists to unlock the ancient spell-power needed to defend the galaxy—or will you self-destruct everything in the process? To save everything, is there anything you wouldn’t destroy?

FORTUNE the FATED is an interactive novel that allows you to make character choices, assemble plot parts in customized order from several genre-spanning stories, and unlock alternate endings based on your chosen readings. It is a standalone work, perfect for new readers, but also serves as a companion novel to The Versus Trilogy & continues the story of The Sergiverse. (Book One in the FORTUNE the FATED Duology).

Zachary developed this game using ChoiceScript, a simple programming language for writing multiple-choice interactive novels like these. Writing games with ChoiceScript is easy and fun, even for authors with no programming experience. Write your own game and Hosted Games will publish it for you, giving you a share of the revenue your game produces.
30 Likes
Eiwynn January 19, 2023, 6:28pm #2

Congrats @ZacharySergi on this going live with this title!

It will be a fun read this weekend.

There are three DLC packs available at the game’s launch, just in case people were wondering about that.

I think I just pushed a fix for that bug.

Be sure to purchase the base game before the DLCs if you are purchasing on Steam.

Steam will give an “access” error, if you try to purchase the DLC before the game.

If it is another platform, you’ll want to contact support at: support@choiceofgames.com with the details.

Edit: Looks like Jason is aware of the issue and pushed a fix for it already.

So, there are/were two bugs.

The looping bug in the upgrade screen has been fixed for all omnibus users. You just need to refresh.

HOWEVER, if you’re using an iPhone, it turns out that Apple approved the three DLC but not the base game, even though all four products were submitted at the same time. So…you can buy it on the web and restore into the omnibus, or you can wait for Apple to get off it’s ass and approve it.

Sorry for the cluster.

Is this Zachary Sergi’s first game? The name sounds familiar.

He wrote many well-known games in the Choice of Games line, namely the Heroes Rise and Versus series.

Thank you so much, hope you have an epic adventure!!

Thank you thank you! This one has been in the works for many years

I think I’m taking this as an excuse to start back over again with Heroes Rise and play through the entire Sergiverse. I’m looking forward to it - and this new one just sounds amazingly good. Congratulations on the release @ZacharySergi!

Hope everyone has a blast on this new adventure! So nervous and excited to share this one with everyone, it’s been in my head/heart for many years.

While reading, If you want to listen to the playlist I built while writing, it’s on Spotify here: Fortune the Fated - playlist by Zachary Sergi | Spotify

I can’t listen to music with words while I read, but I wish I could because that is one heck of an awesome playlist! I see so many of my favorite songs and artists on there!

Thanks so much for the kind words, and it sounds like we have similar (aka good) taste in music lolol

That makes me think I should check out the artists I’m not familiar with and maybe discover a few new favorites!

Do you have playlists for your earlier games as well?

Really looking forward to this! I tend to play pretty sober, self-serious and altruistic characters in Sergiverse games, but the first couple pages of this one has me leaning towards a reckless MC – so excited to see how personality plays out : ) early rose for Brit & Boris, I love them already. Congrats on the new game!!

For The Versus Trilogy, yes! And my hardcover novels. All my playlists are here, and I take them way way way too seriously

Thank you!!! I wanted to tap into the wild/villainous side here, so that sounds perfect

@ZacharySergi, may I ask how you pronounce your last name? I was talking to my husband about ordering copies of your print books and realized I wasn’t sure if the G was hard or soft.