"The Magician's Workshop" -- Uncover magical secrets of the Renaissance! 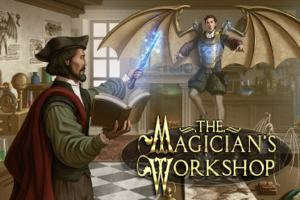 We’re proud to announce that The Magician’s Workshop, the latest in our popular “Choice of Games” line of multiple-choice interactive-fiction games, is now available for Steam, Android, and on iOS in the Choice of Games Omnibus app.

When your master is murdered, you must uncover the magical secrets of Renaissance Italy, before your rival apprentices expose them first!

The Magician’s Workshop is a 190,000-word interactive historical fantasy novel by Kate Heartfield, where your choices control the story. It’s entirely text-based—without graphics or sound effects—and fueled by the vast, unstoppable power of your imagination.

In 1512, Florence is known for ruthless politics, art, and magic. Now that the infamous Medici banking family is back in power, the city is full of dangerous secrets. What would the treacherous Machiavelli do in a situation like this? Just ask him in person!

When your master’s body washes up in the Arno river, you must take over his Maria Novella workshop—the designs, the paintings, the marvelous machines and inventions, and most importantly, his book of spells, written in various ciphers and magical invisible inks. You have inherited a roster of dangerous clients who are losing patience, and two rival apprentices who could prove allies or even lovers, if they don’t turn on you to wrest the workshop from your hands.

Can you use your skills in the arts or sciences to gain allies and buy time? Are you quick enough with a blade to keep yourself safe in the streets? Are you clever enough to decode the master’s instructions to build a terrible new machine, and are you ruthless enough to sell it to the highest bidder? Or will you work together with your fellow apprentices to build the machine in secret and use it to bring stability to the city, and to all of Italy?

• Play as male, female, or non-binary; gay, straight, bi, asexual, or poly.
• Use alchemy, animation and soothsaying to create magical entertainments, win street fights and impress your clients
• Design and build a flying machine, an unbreakable vault, a wall-breaking weapon, an enchanted pen and ink for a philosopher, or a refillable gold purse for bribes
• Uncover the secrets of Florence and rise to power in your own workshop, leading your own team of magicians and artists
• Meet famous historical figures such as Niccolo Machiavelli and the future Pope Leo X
• Paint a fresco in the public square, escape your enemies in a boat chase on the Arno River, or just play cards and talk politics in the taverns of Florence

The master made dark sacrifices to learn what he knew. Are you prepared to do the same?

We hope you enjoy playing The Magician’s Workshop. We encourage you to tell your friends about it, and recommend the game on Facebook, Twitter, Tumblr, and other sites. Don’t forget: our initial download rate determines our ranking on the App Store. The more times you download in the first week, the better our games will rank.

Awesome, lol got it already… Holy devils, I think I’m addicted to CoG and Hosted Games

I love the demo and looking forward to buy this game, it seems very unique in the sense of how we deal with people and situation around us.

And i am glad to have an ex lover who remain loyal to me and show up for support in time of needs , especially when the ex is a politician who doesn’t afraid of a scandal, looking forward to reunite with Giulia

Super pleased with the game so far, I’ve already bought it and am half way through! Awesome and engaging story!
Edit: Just finished my first playthrough and I loved it! A super fun story which had a lot of variety and options, while still maintaining a fantastic narrative!

I enjoyed the narratives written about a lot.

Thank you for the wonderful game @abbytrevor and @KateHeartfield, the hard work from you both shows in the implementation of the game - there were some choices that I had to consider deeper than is normal and the pieces of all the narratives were of a cohesive whole that is rarely achieved with such consistency.

This is a really solid game with some very interesting choices that flowed together.

Just one question now that Is the Dangereuse romance only in the epilogue, or is there a way to trigger a choice for them in the back third when we’re thinking about who we are attracted to? I got the ‘I’m not interested in anybody’ option when I tried to pursue that.

I got the same thing, but for Fiametta

Same, I wonder if I ended up in a weird situation. I was flirting with Piero, got into a squabble with Fiametta, then when I tried to make peace with her there was an option that said “I’m not interested in anyone romantically” and that was the only option. I guess I’m out of luck, I have very bad stat combos in general and keep failing so maybe that’s why.

The stat checks are really hard i think. The game hates us because we are not perfect.

Popping in to shed some light on the RO choices, so you don’t try for stat combinations since that won’t get you anywhere – there are two chances for each potential RO for you to say whether you’re attracted to them in the first third of the game, and after that the game decides you’re not interested in that person (the idea is that you’re not constantly being asked if you’re interested in someone you’ve already said you’re not interested in, and also so there’s not too sudden a change in your relationship with a character at the end.)

This is really useful feedback for me, though, and I’ll think about whether there’s a way to change that without breaking other things. So thank you!

If you do want to try for a romance with one of those characters in the meantime, you can look for an option to leave that open in the early chapters. You’re not locked in to anyone you say you might be interested in; it just leaves that option open.

I’ll try again, I thought I was flirting every time it came up but perhaps I missed something. I had been dragging Piero along on everything and it pissed off Fiametta even though I would tell her things after the fact… you know, RO has to come first

I do enjoy the setting and the writing. It seems like we quietly enjoy things but loudly voice our problems, so I want to compliment the work even though I’m having a bit of trouble at the moment

Thank you so much for saying so! And please do let me know if you keep running into inexplicable trouble – it’s always possible the code is doing something I didn’t intend and didn’t catch yet.

The skills and magic stats are hard to understand here. It seems to me,most stat checks are successful as long as they pass more than 55% in early chapters. The bars doesn’t visualize the proper success rate that I expected when stat checks occur. I kinda expect I’d be steamrolling checks when it reaches about 80% or something but you only need about 60% for it to happen. Maybe I’m not used to this game stat system.

Yes…you need not raise more than 60. But there are lots of stats. And most of the time you will need a combination of two to pass the check. For me it was difficult. I failed so many checks because I didn’t have proper combination.

In my second time of trying to romance Konrad I actually got it to work after choosing a different tavern to go to and passing a skill check (the 1st time I failed a skill check and looked like an idiot in front of him and he only liked me ‘a little bit’ at the end )
But I really did enjoy this game and brought it as soon as I finished the demo, there is a lot of repayability with the character customisation, stat combos and relationships with other characters. In one playthrough I was best friends with Pierro and another I literally ‘bit my thumb’ at him. I love the history of Medici period Florence and magic so this was a great game for me
But I admit that I had to keep on returning to the stats page to check my stats and work out what stats to use for what choices basically every time I got to a choice because I didn’t have optimal stat combos ready

I keep getting the “I’m not interested in a romantic/physical relationship with anyone” despite flirting the heck outta Piero. Anyone know why?

Hmm…For me the stats system is a little frustrating.I think it’s fine if I didn’t boost my stats enough or I misread the stats it checked(though I don’t like it),but sometimes I just can’t use the stats I boosted.With 3 kind of magic,6 skills,6 pairs of opposite traits and often no more than 3 choices,this happned more than I’d like it.

Agreed. This game maybe suffers a bit from having too many stats.