I’ve been working on this story for about two and a half months now. In it, you take over the life of a non-gender specific character who seems to be living a normal, unsatisfactory life.

You do have a not so normal past however, and as time trickles by, this only becomes clearer. The excitement comes in the form of your own demons, long and recently buried, springing back up and forcing you to make hard choices that will have resounding consequences.

It’s your past versus your present for your future, which will define you?

As you go ahead to read the first three chapters, keep in mind that this is my first official attempt at a story, and for some reason, I chose not to start very small. It’s going to be a bumpy ride.

You can play the demo here: S:BE

Feedback
I’m open to all all kinds of reviews, but here’s what I really need:

Primary: Your thoughts. What worked, what didn’t work for you.

Secondary: Errors of all kinds, especially logical plot holes in the story.

Tertiary: You ideas on making the story better.

I want to promise to update the story every single week or two, but I don’t think it’s very possible at the moment. I can however promise one major update every month.

Is the stats page supposed to look like this?
Can you at least make it to show the cash? 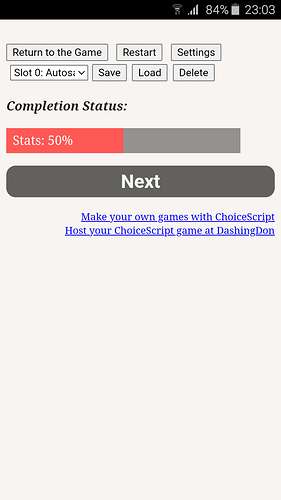 And this page keeps repeating and i choose Lea not Lot. It happens if i don’t try to wake her up. 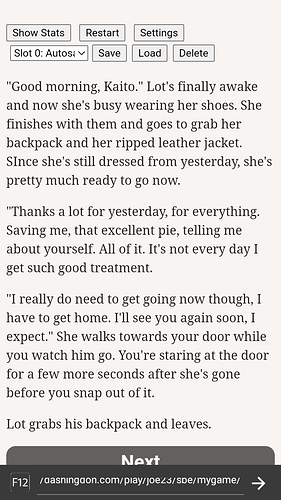 Is the stats page supposed to look like this?
Can you at least make it to show the cash?

I had the idea of making the stats only be available at the end of the first chapter, sounded smart at the time lol. I’ll change it to show cash as well.

And this page keeps repeating and i choose Lea not Lot. It happens if i don’t try to wake her up.

Okay, that one’s a plot hole. I’ll get right on it.

Alright, I just fixed these issues. Sorry for the inconvenience

ooo interesting concept! i don’t have much time rn but i enjoyed the first chapter and am excited to read more !!!

Thanks for the reply, it’s been so quiet in here. Feel free to drop any ideas you might have on improving it

Hey so i just read the wip! the plot definitely shows promise and i seriously think it’s cool as heck. the code is kind of wonky but from what i gathered by reading wips thats normal at this stage

Sorry for the wall of text or if some parts of it didn’t make sense, english isn’t really my first language so i still get occasional hiccups lmao. Hope you’re able to understand what i wanted to convey, and happy belated new year😄

This is exactly the kind of reply I’ve been waiting for. Thanks for the nitpicks, I actually want more of those.

I’m very aware of how wonky the code is. I spent way too much time and attention developing a particular mechanic for the game (coming in chapter 4) and that had negative effects on the editing process, because I’d already set a release date.

I’ve taking some notes from your reply, I’ll get straight to work. I expect to roll out a minor update some point this week.

Thanks for your interest and faith in the story, it’s really appreciated. Also, I actually couldn’t you weren’t a native speaker, I’m not one either though. Happy New Year.

I really like it so far! I just have a few notes (through chapter 2)

Hiya. Thanks for the reply.

Who’s Lex? And when did he get into my house?

I don’t remember Lex’s character coming over to the MC’s house, just Leia/Lot, and there isn’t supposed to be a time jump either, the story is pretty continuous. Maybe there was a mixup with the name variables? Can I get a clearer description of where this happens? A screenshot could also help.

There’s a loop. After work you have your todo list. When you choose to talk to lex, it brings you back to work. Then you can actually go to lex. But then the money doesn’t actually show up, and it thinks that you didn’t actually choose that option.

Okay, that makes sense. The to-do list is still very much a work in progress. I’ll look into it.

The platonic relationships are nothing short of essential here, as I hope to make clear in the coming chapters.

To be honest, romantic relationships haven’t been a priority so far, but I do have plans for them. Besides the fact that I wouldn’t want anything to feel rushed, they’ll make the most impact later on in the story.

I think I’m going to wait to go on to the next chapter until that loop is fixed.

That’s kinda sad, sorry about that. Now I know for sure I need to get an update ready this week. I should probably get to work

Maybe there was a mixup with the name variables? Can I get a clearer description of where this happens? A screenshot could also help.

So, it’s actually Lot who’s in my house mysteriously. At the start of chapter 2, there’s some options of what to do before work. One of them is to wake up Lot, but I don’t know when he got here

At the start of chapter 2, there’s some options of what to do before work. One of them is to wake up Lot, but I don’t know when he got here

Oh, now I get it. I can even begin to imagine how creepy that must have been lol.

I think the error’s fixed now, you shouldn’t see any options about Lot at the start of chapter 2