Hey everyone I was wondering what is everyone’s thoughts on the more cinematic storytelling games and what I mean are the telltale games or more big budget games like Detroit Become Human or Heavy Rain. Would or have you ever played any of these games and if so what do you think? Do you think they are similar to the interactive fiction we have here and would you like to see these types of games/story become more mainstream thanks everyone!

I bought and played TellTale’s The Walking Dead season one and two, and their Game of Thrones. I would say yes, they are similar to CoG and Hosted Games’ interactive stories in terms of the choices having a major impact on the plot and how the characters would react to them. But as for them being mainstream, they already are. Some of them actually have won awards from various game awards shows, got the biggest reaction from the fans at a video game convention when the details were revealed to the public, and Detroit: Become Human was already one of the most hyped games that I saw last year, even some of my real life friends who weren’t interested in video games were interested in the idea of playing it. So I’d say interactive stories where you can make choices in the style of TellTale or even CoG is already one of the current popular video game generes. It’s going to be a interesting future seeing how many possibilities that a video game studio could do with this type.

I wouldn’t really say Telltale games are Choice making games, yes most telltale give you choices but they never affect the ending or anything major(At least this goes for TWD, the batman one and the Minecraft one, can’t say for all telltale games.) It’s basically like how Life Is Strange was where you couldn’t save a certain character no matter what or the ending where all your past choices became completely useless Telltale games are good but for there interactive story telling? No, not really.

Telltale games can be a bit hit and miss in my experience but that’s probably true of anything depending on what your tastes are. Some of them are quite good, for example I liked the game of thrones one, but then again I’m a fan of the series, there are others that I started reading over a year ago and never finished. Downsides are any combat present tends to be a bit clunky and annoying (pretty common for games that focus more on story telling) and although they’re choice games, they usually seem to be very linear. (Most are likely to be more linear than the average text game I’d imagine, probably because of the art costs involved.) Haven’t seen the big budget versions.

Can I make a suggestion to look at Loren Amazon Princess to see if it’s something you might like if you’re looking for an example of a visual interactive novel to try? I also thought soul gambler was worth checking out (Both are on steam).

I love them. The ones from Telltale only give you the illusion of choice though. Same with Life Is Strange, even though I fucking loved it. Hopefully the sequel will have more significative choices. Detroit Become Human and Until Dawn are the ones I consider have done it the best so far. A new anthology is coming from the creators of Until Dawn, it’s called Man of Medan. It looks quite promising too.

I think Man of Medan is the first game in the anthology from Supermassive, the whole series is called Dark Pictures!

Yeah, thanks, I knew it already but I’m too sleepy to properly write sentences 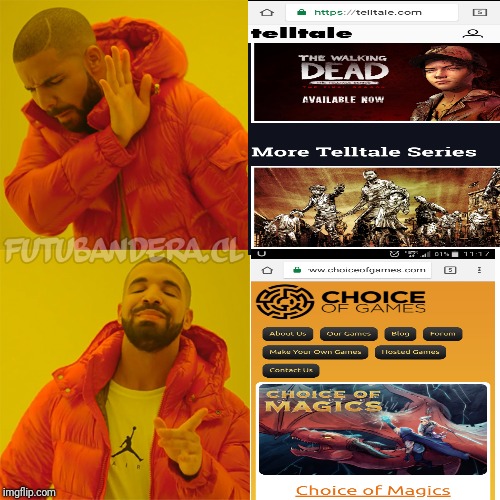 I am concerned about the future of these games, though. They appeal to a niche market within the gaming community, and I’m not sure that the revenue from these games justify the cost. I never actually bought the game; I watched a let’s play and got almost the same experience. I doubt I was the only one.

Man that Drake meme always makes me laugh no matter what. Thank you for making my night!

The genre is rapidly becoming more and more done by studios now with Telltale, Dontnod, Big Bad Wolf with The Council, Supermassive with the Dark Pictures series, Night School with Oxenfree and the upcoming Afterparty, Campo Santo with Firewatch and the upcoming In the Valley of Gods, The Chinese Room with Everyone’s Gone to the Rapture…