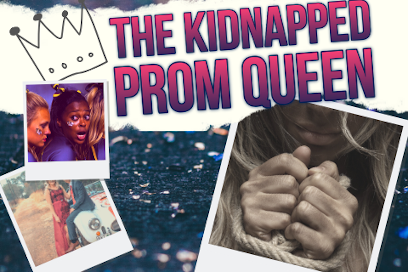 Terror has struck at Franklin High School! On the very day the prom court announcement, the prom queen is kidnapped! You and the rest of the prom committee members soon find yourself trapped in the school, held hostage by the scheming kidnapper. The only way to escape is to solve puzzles, search for clues, and go along with the culprit’s twisted game…but could the villain be closer than you think?

The Kidnapped Prom Queen is an exciting 120,000 word interactive novel by Michael Gray, where your choices control the story. It’s entirely text-based—without graphics or sound effects—and fueled by the vast, unstoppable power of your imagination.

Michael developed this game using ChoiceScript, a simple programming language for writing multiple-choice interactive novels like these. Writing games with ChoiceScript is easy and fun, even for authors with no programming experience. Write your own game and Hosted Games will publish it for you, giving you a share of the revenue your game produces.
17 Likes
Empress_Nightmare April 2, 2020, 4:31pm #2

I would buy but I can only use steam

Just play half of the game and pretty engaging. There many variety of puzzle from the simple day to day puzzle too hard uncommon puzzles thar you never heard of it’s kind, there also some puzzles hint that pretty unnoticeable slipped on conversation that you think unimportant until you realize it was the opposite. Some puzzles is hard for me because of culture different like the states puzzle (i life in different country so it’s hard for me) but the game is still fun. In the until this half of the im pretty happy about this game and enjoy it.

Okay complete the game and unlocking the secret ending and it’s wow. Definitely if the author can he need to make sequel

God Save the “prom” Queen

welp…it turns out MC is the main villain

It dépend of the route.

Honestly this game caught me by surprise. The story was engaging easy to follow and kept me captivated the whole time. The puzzles weren’t too difficult and the different routes and culprits made the whole story lovely. The only thing i can wish for is a longer epilogue( but I complain about the epilogue all the time lol so it doesnt count). So everyone give this story a try. You wont be dissappointed

damn i click it out of curiosity while thinking it was small spoiler(like majority people use that) turn out ultimate spoiler. too bad. i guess i skip this one. my own fault i know. should never treat it lightly from now

I’m quite shocked by the rigidity of the gender/sexuality choices in this. No non-binary option that I can find, and it seems like we’re railroaded into playing heterosexual (at least, as far as I could tell - I stopped playing when the narration insinuated that I had thought about asking a girl to prom, which I would never do). I’m sure the story is interesting, but I don’t think I can bring myself to play through it if I’m forced to be straight.

I seem to do something wrong, played 4 times and bitten two clues, both doubled. How do I get the Last one? If Somebody knows, pls PM me

Damn, this is a nice surprise in these times… It’s WoW…

I don’t think there’s much romance…

Don’t think so not from what I’ve seen so far. I think u can tell if there’s romance if there is the gay straight bi thing next to male and female

What’s the route where the Mc is the main villain???

How do you do it!!! I’ve been trying for the past hour or so.