My new game, A Wise Use of Time

Feel free to post feedback and errors for the game here. Excited for my first official CoG title!

About the game:
When you freeze time, no one can see you, hear you, or stop you, except, perhaps, a handful of mysterious time controllers like yourself. Every second you steal puts more stress on your body and mind.

Will you bring justice to the mobsters who run rampant in your city? Will you steal from them to provide for those in need? Will you share your power with friends and family? Will you destroy your own powers, or will your powers destroy you first? 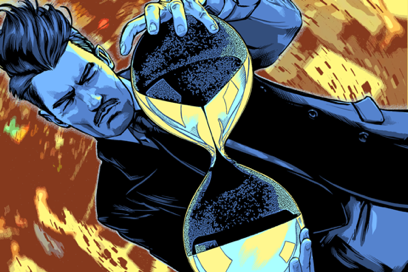 A Wise Use of Time

With the power to freeze time, you can ransack a casino, rescue a celebrity, or cheat death itself! A thrilling interactive sci-fi adventure.

I bought my copy on Android, gave it a 5 star rating, and shared it on Google+. I’m enjoying the story so far, and I know I’ll love it because of the great length and because it’s from you. Congrats again!

If I buy it for android, will I also get a copy for my PC as well?

And I have a 2-star there already. Never fails.

Game was good, strong writing throughout though I felt the characters outside of your roommates were unexplored. It also doesn’t seem to be possible to avoid telling your roomies about your powers, which is kind of a negative if you just don’t want to interact with them much. Biggest thing was that Barnaby made the story feel somewhat…disjointed? Like, it was primarily about the morality and interpersonal relationships of someone who could stop time, and while he provided the essential story and climax it just didn’t fit in since he was all about fighting.

Well @JimD as one of my favorite writers here I bought you right day one an a 5 stars. But without started I felt I won’t enjoy it. Having special powers and that is boring for me because normally games are built only to use them like a mantra, instead of developing a rich set of characters and guion. I hate superhero stuff normally. But I know you are a great writer so I think you could make an interesting game from this. Anyway, Do you accept that I put here my sincere feedback here or perhaps I should send to you… I just don’t want discourage people if I won’t like it. But also I wouldn’t lie about my opinions.

Nice game, enjoying it so far…but I think I’ve spotted an error:
In this scene, when choosing to play without my ability and winning, I never get the money the scene indicated I should have won: “After thirty minutes of play, you are betting thirty dollars a hand and winning twice for every loss. Also, you feel at ease as if the very act of winning has been a stress-reliever. As the last cards are dealt for that round, you count four hundred extra dollars in chips.”

@JimD I bought it this morning on IOS and gave it a 5*'s.
Really good story man, the characters are well written and it gives you allot of choices.
I have only gotten one RO so far but going to try to get the hard one next.

@Sylfaen Did you go to Kate’s party or to the shore with Kyle? I tried to have more of their stories in those sections. I guess I struggle with brevity and wanted to tell the story in so many words. If I had 3-4 more chapters, I could have explored them more.

Not telling the roommates adds a lot of complexity, and at the point when they discover something is up with you, it would be hard to keep it from them.

With Barnabas, I can see your point. I gave him one strong motivation, so maybe if I made him more complex, you would have like him as a character.

@poison_mara these forums are for feedback. Post any opinions and criticisms

@idonotlikeusernames I’ll check that out. Thanks!

Well First about what i had read so far. Well written but just a little fast paced at first chapter. Good dialogue and seems choices matter so far.

But as I said before All the focus in powers and being forced to used them in many places. Being forced to tell roommates my secret and other stuff just make me roll eyes . But it’s my personal preference not your game fault. I enjoyed immensely the office work and that using charisma. I don’t ended the game in fact I am near middle point but i am no incentive now to keep reading. Hey but I paid my money happy to support your job and your zombie stuff that is more guion no superhero stuff and it is more my style.

Thanks @poison_mara and I hope you enjoy Safe Haven’s future development.

Picked it up, Jim. My first official CoG purchase in a while-- finally coming back out of my hermit hole.

Glad to have something good to celebrate that with.

@WayWalkerLeigh thanks so much. And hope you come 'round here more often!

You are welcome! i’m just so glad i can finally read something you’re written…that zombie phobia really sucked when i really wanted to read yr work and see firsthand the quality everyone has been talking about all this time.

and yeah, i’m hoping to. i’ve got a bit of a buffer with my other publisher and those novels, so i should finally have the time to get WW:U3 done and be around here more.

Well I’m back to zombie writing now, so ignore any other posts I make here

I am sure WW fans will be happy to know you’re working on the third app! I’m one of them.

Evil zombies! *shakes fist at you *

And thanks, i bet they are. XD Though i never knew you read them! Thanks a ton! It’s gonna be a bit though-- i lost a notebook with like all the notes on the main plotline. -_-

that and you know, i’m the crazy person who lets the MC date everyone in the ruddy school. >.<

I’m completely broke at the moment, so unfortunately I can’t buy this or any games currently, but this going to be on top of my to buy list as soon as I have some spare money.

Is it possible to save Olivia with out stealing at any point that really irked me that I felt like I did every thing right I held the fundraiser but still didn’t get a good outcome. I’m not sure what even I could change while still completely avoiding stealing.

Also can you only follow one character’s story line? (And at which point is this determined so I can figure out how to get other story arcs while stilling doing ‘nice to everybody’ playthoughs)

Even though I was consistently nice to Kate I never got any options to follow her story line/offer to help her.

To win the fundraiser, you need help from Hailey. And you can get that either by publicly saving her, or by asking her sister.