I’ve taken some of the lessons I got from the post-release feedback I got to Super Star Soccer Striker and created a WIP version of my new game: Last Chance Quarterback.

The story is now more set, with off the field stuff having consequences, with more in depth characters and the protagonist has a backstory instead of being a blank slate. I’m hoping that I’d be able to get some feedback before submitting for release.
Thanks.

Just started the demo, I haven’t gotten very far but so far this needs some major rewriting.

For starters you need to rename your reporter and the other player. Both Anita Bryant and Dwight Schultz are real people.

Anita Bryant is a political activist known for her Anti-LGBT activism. So that may or may not turn off some of your readers.

Dwight Schultz is an actor.

Not sure if the story can be published with you using real names.

With the use of the names of two real people and how you named the other NPCs readers may not take this story very seriously and thinks it’s some sort of joke.

There is also alot of misspellings and grammatical issues.

In one of the first choices to select gender you misspelled the word gender, you wrote it as “gener”.

You also misspelled the word “morning”, you had it spelled as “‘mourning”

Also when you enter your significant partners name this is what shows up
Hello Amy !" %SO_name}

The story is hard to read because the paragraphs are running together, it reads as one big block of text especially in the stats option. You need to break up the paragraphs and add spaces.

I couldn’t get very far into the demo do the lack of spaces between your paragraphs, it became unreadable.

Positive: You have done a lot of research into this and explained various positions and plays so that those they aren’t familiar with football will have a bit more knowledge about it.

However with you using real names for the reporter and one of the players, along with the names of the NPCs starting/ending with the same letter it and how paragraphs are all running together it comes across like you put more attention into explaining the history of football and about the sport itself then you did then story.

There isn’t a lot of sports stories so this could fill the void but it needs major polishing up and quite a bit of beta testing.

I would recommend doing a couple months of public beta testing before you consider releasing it.

This story has the potential to be really good.

I did not know about the two real people, and will change the names of those two characters to be on the same side.
The paragraphs thing can easily be fixed with line breaks.
I’ll double check for misspellings and grammatical mistakes.
I’ll also address the part after the SO’s name.
Thank you for your honest feedback.

I hope it doesn’t come across harsh.
I really like your story idea and it definitely can be a really good story.
You had really good options and I liked how you explained the sport in the stats.

If you fix the paragraphs, grammar/misspellings and change some of the names, you have a good solid story.

I am looking forward to trying the demo out again

Harsh? It’s a bit of a grey area as to whether it felt that way imo, but in fairness to you, and being honest about my own work, I had forgotten to use Grammarly in the first couple scenes, and didn’t fully proofread my opening (I only did that in the later scenes for some reason, guess it just slipped my mind), so I needed a bit of a (metaphorical) kick to do it, and would prefer borderline harsh feedback over releasing something like that officially 100% of the time.
I went through it a little to fix some of the issues you mentioned, and will repeat that a little for the next few days.
Thanks again.

Hey, thanks for another sport game. I was just wondering, would you please consider adding a cheat mode to Superstar soccer striker, or even this one? I would like a super character from time to time lol.

Okay so I just got through the 3rd quarter of the game and I already noticed some gameplay issues regarding this.

A QB should have 2 strong areas they’re good at as for example, both Patrick Mahomes and Lamar Jackson are pretty good at scrambling and short passes while Tom Brady and Aaron Rodgers are both pocket passers with a gunslinger tendency. We got only one good area and the option to bump our second best skill should be at 5 or 10.

Also the norm for passing attempts for the QB in a NFL game is usually around 30 to 45ish attempts but in my first game during 3rd quarter, I attempted 50 so there should be more chances for a running back to run the ball or reduce the time between plays a little bit more.

Also enjoyed the situations where a QB needed to step up and show leadership, no matter what kind of player or if you’re the best on the team, the QB is your leader on the field.

The three minute drill is a lot of repetition with no stakes. I’d add an option to skip it.

Also, aside from the “template,” maybe an option to raise one/lower one? Practice is so insignificant that I felt creating my char, whose career is already pre-written, was very much out of my hands. If I’m not able to tell my own story, and not really able to create my own character…is this really a CYOA?

Aside from that, seems an improvement over the last one.

Played through some more, and got caught in a near end loop of " and goal" where we ran over 10 times in a row before a TD finally ended it. Really, the runs were a huge pain. Even without that bug, there was another case of 9 consecutive runs for 1 first down and 2 punts, and another of 5 runs in a row while trailing in the second half.

The clock runs much slower than in real games, making any attempt at clock management odd, and the longest pass I’ve seen is 20 yards.

Thanks for all the responses. I’ll try to get to as many of them as possible.

I could make a super-player in this that would likely just add a fair bit to the MC’s attributes as a sort of “god mode” that could be turned on and off.

I could adjust the character pre-sets (or add more) and then randomize some loses and give the character more training to compensate in order to create more customization and randomness, as well as letting each player feel more unique. This would probably lead to some players min-maxing, but there are some minor mechanics in there to give that diminishing returns (passing to the same receiver over and over will lead to him being covered more, etc.). Since I do have two people giving me feedback on the player builds, I do feel that this is something I should address.

I could slightly increase the time between plays, and the time the opposing team has the ball, with an option for clock management (especially after run plays) to reduce attempts to a more realistic amount per game.

I could add in a feature for the three minute drill to skip. I could simply add an “I understand the engine, simulate the rest of practice” option to each choice showing up after a handful of plays with no in character consequences. It’s there to help the player understand the engine before purchasing, so adding in a ‘skip’ option for those who get it is fair.

I’ll try to adjust the frequency of runs and passes in the 2nd half based on winning/losing. As for the bug, are you saying that it was effectively “10th and goal”, or am I misunderstanding your post?

I believe I’ll have the time to work on these tomorrow.

Thanks to everyone who posted for feedback.

I wasn’t looking for a “super player,” just the ability to subtract from some areas and add to others.

I could add in a feature for the three minute drill to skip. I could simply add an “I understand the engine, simulate the rest of practice”

This is perfect. I appreciated the drill the first time I played, but dreaded it on future attempts.

As for the bug, are you saying that it was effectively “10th and goal”, or am I misunderstanding your post?

The exact wording was " and goal." There was no down number. There was a penalty in the first few plays (and others later), don’t remember what, but at one point it was " and goal" from the 28. I basically just kept hitting next until I got the TD, as I had no other choice.

Also, some explanation of what you consider short, medium and long passes would help. In addition, a quick list of all the levels of coverage would likely help new players.

The super-player stuff was a response to another user. Sorry for the confusion.

I will try to recreate the bug that you mention, as that is very concerning and thank you for bringing it up.

I can add further explanations for pass lengths and coverage for new players, as I can see helping them. Thanks for the suggestion.

Yes, the super player was a response to me and will be optional. Thanks for that @AgentV I will appreciate it very much. Also, I found something funny when showing the halftime score. It would say something like Dogs 6415 hyenas 15.

Thanks. Uploaded part of up update to DashingDon, but forgot to upload the second. Working on getting that fixed now.

Did another play through, noticed one error in the choices were the reporter is still named Anita. 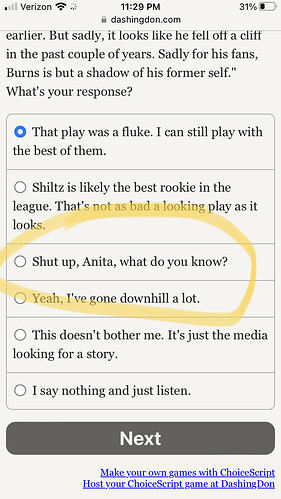 There is still quite a bit of wall of text especially at the beginning and in the stats that needs line breaks. I would recommend adding the line breaks when you are able to as it makes the text much easier to read.

I really enjoyed the scene at the hospital where the MC got to interact with the kids, it was very descriptive and well written. 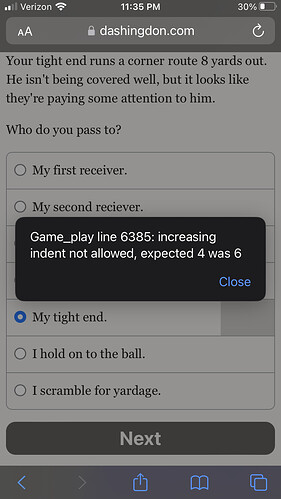 Other than that the story is really coming along and it’s becoming more polished. I look forward to continuing with the demo.

I definitely will be purchasing this when it comes out.

Yow nice wip i hope you continue it

I was passing to my running back.
Alert! Game_play line 5757: increasing indent not allowed, expected 6 was 8

I’ve fixed the bugs mentioned, and am looking for more feedback. I will try to figure out more ways to make player development a bit more customizable. I made training a bit more importance with a few more base options. Please write any more requests you have.

Thanks to everyone who has posted here so far.