Thanks for the last few comments, I’ll get to them later today or tomorrow (sorry, at the moment all my attention is on the artwork).

I posted also in the main page in the forum, but do any of you have any thoughts on the artwork? (like, many people seem to be saying different elements should be combined… what parts of each do you like best?)

EDIT: Not sure what I did, deleted original poll, so I had to reinsert it (please vote again, sorry if your vote was lost from first one…) 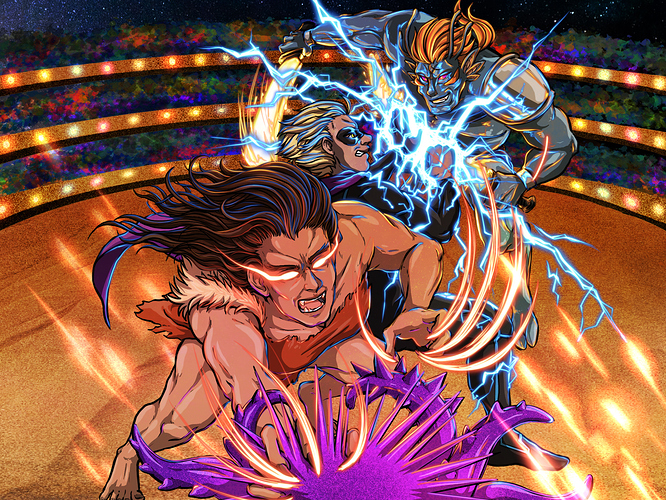 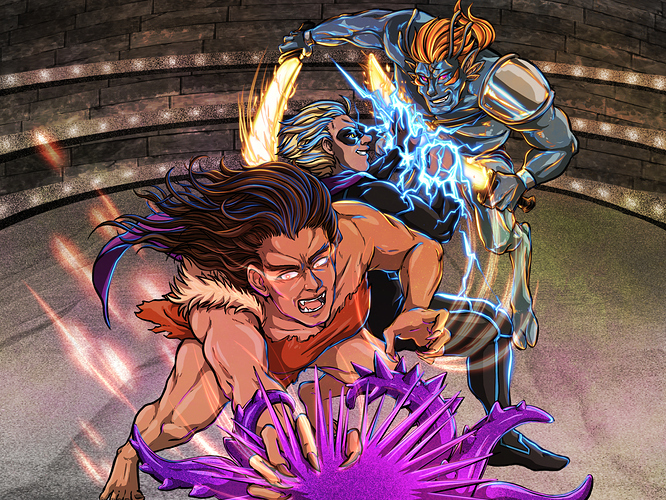 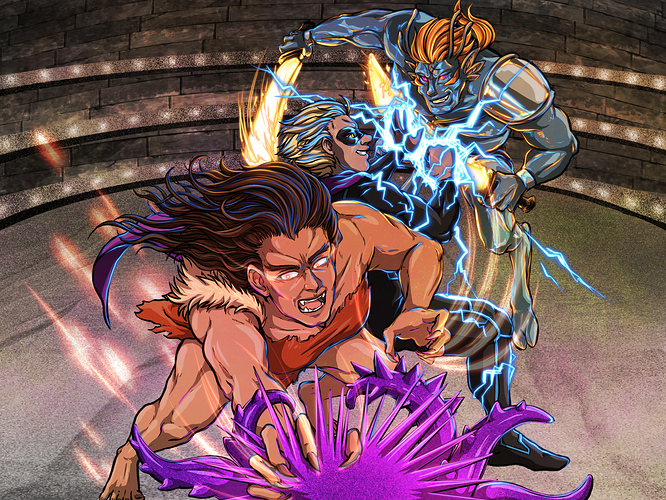 That’s wonderful! Sounds like you know how to make the most of it

Congratulations on finishing the sequel! Idk if you have celebrated yet, but you totally should!
Oh, and any tips for the newbies trying to finish a game?

As for the artwork poll,
I really like the neon effect the big blue rays have in the first pic. Personally I’d combine that with the third pic. 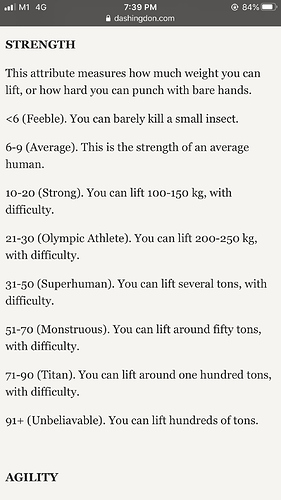 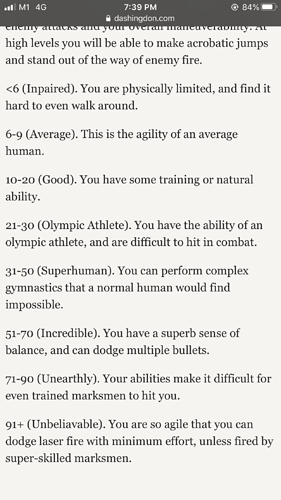 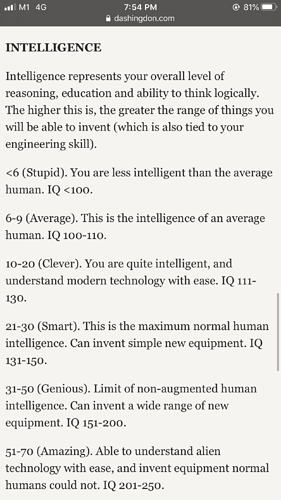 I think these differences are comes from UK English

If these are not spelling mistakes I will eat my shoes

) I have further nuanced the behaviour of two opponents, Blademaster (in this game) and Ruby Psyche (in the first game). They will now have a different form of attack in later round against speeders, which is unavoidable. This is less severe than their normal attack for those rounds, but could easily knock of a speedster with low stamina and no armour (ok, if you have a speedster with high AGI, high armour, high endurance… well, I mean, if wolwerine was a speedster its game over for everybody else right?). Hopefully this adds “a bit” more challenge for speedsters, balancing the game slightly? (especially for the higher difficulties… but yes, still somebody arriving from game 1 and making all the right choices could have an easy time… though maybe slightly less easy now)

(also, added you and @Einharr to private thread with full game link)

@TheJake_Kelly3, yes, this needs to be explained better… basically here its a tradeoff with humanity. Anyway, I added this:

"There are also three types of sub-dermal armour you can use. Cartilage-based products can be expensive, as they involve cloning your own cells in a bio-reactor. Although they offer less protection than silicon or graphite systems, your body will also tolerate them much better. "

@bokeh biggest tip I can think of: write a railroaded (i.e. give the reader NO CHOICE, only use fake_choice commands, every 200 words of text) text, from beginning to end (20,000 long playthrough). Do it, do not show it to anybody, finish it (its 20,000 words, not so long). Arrive at one ending (not three, not five, just one ending… remember, complete railroad!). Then, and only then, allow yourself to branch out and show it to other people. Fear not, by the end of the process your little creature will have ballooned to 25,000-30,000 word playthroughs, and hundreds of thousands of lines in total… but, all this is easier said that done! (in this game I really tried my best to follow my own advice, and just write one long game before giving any real choice… and now its slowly ballooning -and becoming a better game! Playtesters are just so much help!)

@0roxson0 corrected! (well, in the next update, probably later today…)

Oh, wow! Never thought of that. I can definitely see how writing it that way would give a person more focus to finish the story and not get lost in writing the options.
GREAT tip. Thanks so much for sharing!

No what I meant was the price, I understand that you lose more humanity but the price was cheaper on the second one and the price on the first one was more expensive

@Bokeh glad to be of help! Remember, complete railroad, and reach 20,000 word playthroughs! (thats been my secret to finishing this game). But, while doing your “complete railroad”, leave clear places where you will allow the player to later go on side missions (“What will you do tonight?” While writing your railroad just offer the reader a choice to study… but later you can write side-missions!). Once the first railroad is finished, then feel free to expand the game until you run out of steam. When you run out of steam… the submit! The danger of not doing one railroad is that if you run out of steam half way through the game will never be finished… my very first WIP is still not finished…

@TheJake_Kelly3 yes, its supposed to be that way… harvesting cartilague and regrowing it should be more expensive than placing silicon inside a body. So, you can go for the cheaper better armour, and take the hit to humanity… or, if you only have a little bit of humanity left, go for the more expensive but worse armour… I wanted some choices to be like that, to make things more complex. But, as I said, this will be explicitly indicated in the text on my next update… hopefully today…

Gotcha! I’ll take those words to heart. Heck, I even made screenshots of the tip. Thanks again for sharing

What was your first wip about?

This is my second attempt at it (basically, I decided that I have to go through it and re-write completely, given everything I learnt after writing it). I will complete it one day, as I have this thing about never letting work go to waste…

and I was unable to read much then the first few chapters but what I did read was quite good. I only have a suggestion for future use if you decide to. I think it would be a fun idea that if you ever return to earth and you are a villan you could unmask yourself on tv or something similar.

@Eric_Moser @Lycantrophy thanks! Posting that yesterday felt like a huge relief…

However, I didn’t understand properly the order of things with playtesting the save feature from book 1 (you’d think that having several games under me would make me know the system better…). CoG want to check the save feature for the game at this stage (I thought this would happen later). So, I guess what will be happening in the next few days is that the game will move from dashingon to CoGs servers, and that we can actually continue playtesting even during this period

And, just to take the time to say once again thanks to all playtesters and readers who have given feedback or posted words of support. I doubt it would be possible to really finish a game with all the support and energy provided!

So i have played like 12 diferent endings from the First game i think there are like 28 endings (in my opinion i dont like alien thing but i will acept it). So i started to play second game and there could be more posible question on beginning like when or how i can come back to earth or more informations about your romance partner if you have one

@DangerTrick yes, this is one of the things that I need to improve (the connection between the games).

Regarding the icon for the game, there are three options… which one do you like best?

@adrao if you want a better result, you should reduce those images to 57x57 pixels and ask opinions about them. When you scan see the art at fullsize it’s a very different experience than how the users will actually experience it.

Ok, a new poll, as I’ve now realized my mistake in posting the three images earlier (which are misleading). Basically, this would be the icons as you would see them in your phone. Which one do you prefer… or something else entirely?